Josh Fox, Director of the “documentary” Gasland, recently appeared on Fox Business for an interview with Stuart Varney to discuss the results of a five year study conducted by the Environmental Protection Agency (EPA), which found that hydraulic fracturing has “not led to widespread, systematic impacts to drinking water resources.”

During the interview, Josh Fox pretty much had a meltdown, accusing the EPA, and even Varney himself, of “lying.” From the interview:

Josh Fox: Listen, brother that is absolutely not true. And in fact I am your neighbor. (3:48)

Varney: Are you kidding, I was there – I bought the property 12 years ago. Interesting that I’m wrong about lighting the tap water on fire before fracking was ever in the area. (4:05)

Josh Fox: You are absolutely wrong.

Varney: I did it myself.

Josh Fox: Yes I do, on your own show.

What Varney is talking about has been a long-time issue in Pennsylvania and New York where landowners have been able to light their water on fire for decades.

In fact, a Susquehanna County landowners group that is located near Dimock, Pennsylvania has been sporting this tee-shirt design: 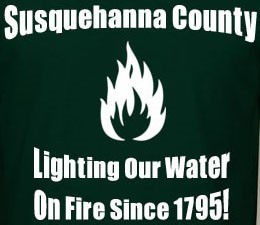 One member of that group, Allen Coy, is a local firefighter who has stories about a flaming toilet in the region—in the 1980s!

It’s also something that’s addressed in this clip of Robert Sandell from Truthland:

In fact, even Fox’s own flaming faucet scene in his film, was deemed naturally occurring by the Colorado Oil & Gas Conservation Commission (COGCC). According to the COGCC report:

“Dissolved methane in well water appears to be biogenic in origin. Tests were positive for iron related bacteria and sulfate reducing bacteria. There are no indications of oil & gas related impacts to water well.”

When Fox was challenged on that point by filmmaker Phelim McAleer in 2011, Fox actually acknowledged the very thing he accused Varney of lying about— of being able to light water on fire in Upstate New York in 1936, way before any natural gas development (1:40).

“EPA went into Dimock and said to people, don’t drink your water, in private letters. And then in the press they actually came out and said, this water is safe.” (3:00)

Again, Fox tries to skew the facts to fit his narrative of flaming tap water. As Energy In Depth noted in this fact sheet, in 2011, the state Department of Environmental Protection investigated whether oil and gas activity was responsible. DEP determined in November 2011 that the operator, Cabot Oil & Gas, had fulfilled its obligations under a consent decree, and the U.S. EPA agreed in late 2011 that the well water posted no immediate health threats. After reversing course with no new data, the U.S. EPA investigated and confirmed its earlier assessment. Fox and other activists have accused the EPA of “abandoning” its investigation, despite the fact that the agency released four separate sets of data, all of which confirmed that no additional action is necessary.

According to the final EPA reports from Dimock:

“Overall during the sampling in Dimock, EPA found hazardous substances, specifically arsenic, barium or manganese, all of which are also naturally occurring substances, in well water at five homes at levels that could present a health concern. In all cases the residents have now or will have their own treatment systems that can reduce concentrations of those hazardous substances to acceptable levels at the tap. EPA has provided the residents with all of their sampling results and has no further plans to conduct additional drinking water sampling in Dimock.”

Just to illustrate how outrageous Josh Fox’s claims are, after the interview he continued his temper tantrum via Twitter, where he accused the EPA of “shilling” for fossil fuel companies. According to an article by the Washington Free Beacon he claimed,

“They will stick with the industry till all our water is contaminated, our air polluted and climate change has made our planet unlivable.”

Of course, Fox’s mantra of “The EPA is wrong, the USGS is wrong, you’re wrong and I’m right” continues to fall on deaf ears. Thanks to increased domestic oil and natural gas production Americans are seeing lower energy costs, cleaner air and an expansion of industry that supplies family sustaining jobs. And that’s something even Josh Fox should be able to appreciate.