Getting the Facts Straight on Oil & Gas Employee Safety

The safety of employees in every industry is critically important – one fatality or injury is one too many. Over the past few years, the oil and gas industry has partnered with federal agencies, including the Occupational Safety and Health Administration (OSHA) and the Centers for Disease Control (CDC), to study workplace safety in order to ensure the safety and protection of its employees. This sort of collaborative effort is a critical aspect of industry’s continued drive toward a goal of zero injuries in the workplace.  The result? The oil and natural gas industry has created an ever improving climate of safe and responsible operations.

This week, the BLS released its 2013 figures for non-fatal injuries in the workplace. The oil and gas extraction industry can once again claim success in decreasing its injury rates.  E&E reported on the numbers asserting, “Energy firms and utilities have once again logged rates of nonfatal occupational injuries and illnesses lower than the national average.” The industry recognizes its work is not done until it achieves a zero rate of fatal and non-fatal injuries in the workplace. However, these facts demonstrate that it is well on its way.

The following information gives context to the industry’s robust safety record and provides clarity on some recent findings of best practices in worker safety. The details below convey the facts, much as we have done in past assessments.

It’s worth noting up front that the industry’s commitment to safety has been applauded by none other than the Chief of OSHA, who stated “This industry has stepped up to the plate” in driving down workforce injuries to levels not seen in four years.  This is all the more telling when one considers the massive uptick in energy exploration and development.  It is in this very context that we relay the numbers below and the conclusions that can be drawn from the occupational injury and fatality rates of recent years.

FACT: While oil production – and subsequently employment – has been on an unprecedented rise, fatal injuries have declined.

The Rise in Production and Employment

FACT: High oil and gas production in a specific shale play is not correlated with a higher rate of workplace fatalities.

FACT: Compared to other private industries, the oil and gas industry has a low workplace injury rate. 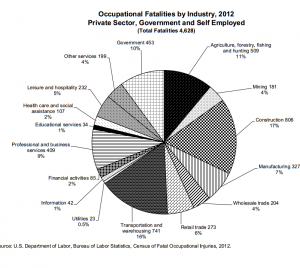 Note: In the chart above, oil and gas extraction falls under the “Mining” category.