Years of aggressive anti-natural gas policies, while simultaneously increasing natural gas consumption, is coming to a head in the Empire State. Gov. Andrew Cuomo recently threatened to revoke a utility’s license to operate for not adding new natural gas hook-ups it cannot reliably supply as a result of Cuomo’s war on hydraulic fracturing and pipelines.

Cuomo followed up an October emergency order requiring the utility company National Grid to lift its months-long moratorium on new natural gas hook-ups for existing suspended customers, with a threat to revoke the utility’s license to operate downstate (New York City-Long Island region) if it is unable to find a solution to supply this natural gas to all roughly 4,000 applicants by November 26. The irony: The company never would have had to suspend service in the first place if not for the governor’s ongoing pipeline blockade.

As the Wall Street Journal editorial board pointed out:

“In another display of political grace, Mr. Cuomo has ordered the utility National Grid to resume natural-gas hookups that were suspended after his senseless pipeline veto this spring. … Apparently Mr. Cuomo didn’t understand that the result of his pipeline blockade was to force residents to use more expensive and less-efficient electric appliances for space and water heating.”

Millions of customers could now be at risk of increased extreme weather outages because without the additional capacity from new pipelines, there simply isn’t enough supply to keep up with the significant growing demand in the New York City and Long Island region.

And unlike neighboring Pennsylvania – which ranked fifth in natural gas consumption in 2017 – New York is not producing anywhere close to the nearly 5.5 tcf of natural gas that the Keystone State did that year.

This high consumption with limited production has forced New York to rely on pipelines to meet demand – with much of that natural gas coming from neighboring Pennsylvania. 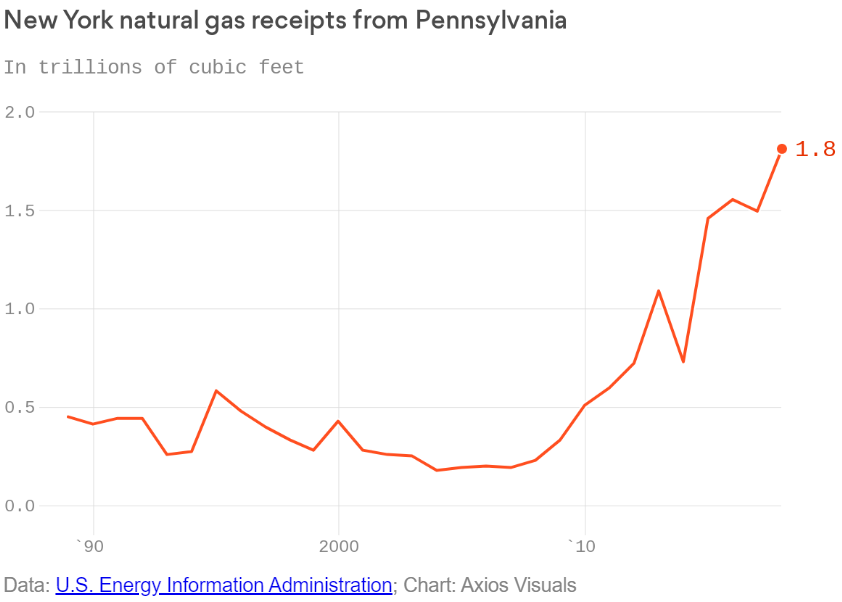 But it hasn’t stopped the governor from using Section 401 of the Clean Water Act to block the construction of several pipelines that would increase natural gas supplies to New York or transport the resource through the state to New England, putting the squeeze on his own constituents and the residents of nearby states.

The result: Two of New York’s biggest utilities placed moratoriums on new natural gas hook-ups earlier this year to ensure that they can maintain a reliable supply for existing customers. While ConEdison has since announced it will be able to lift its moratorium by 2023, after working out an agreement with Tennessee Gas Pipeline to expand its capacity outside of the state, National Grid has yet to be able to find a realistic solution to support the influx of new natural gas hook-up applications.

For perspective, National Grid’s moratorium includes about 1,100 existing customers that suspended service for things like renovations and another approximately 2,600 applicants – roughly 20,000 commercial, residential and multifamily units in Brooklyn, Queens and Long Island – for new or expanded hook-ups.

In a recent meeting, three of New York’s five PSC commissioners acknowledged the problem the state is facing. According to the New York Post:

PSC Commissioner Diane Burman: “[I]t’s easy to blame the utility but Albany is also at fault for failing to make the tough decisions to boost the energy supply.”

‘Those who say ‘no new pipelines’ should look at what the ramifications are,’ Burman said.”

PSC Commissioner Tracy Edwards: “She said it’s still unclear how ‘big’ the gas shortage is and whether it could be addressed with or without building a new pipeline downstate. But she added, ‘I believe there is a capacity issue.’” (emphasis added)

There is an abundant, reliable supply of natural gas in the Appalachian Basin – of which New York is a part of – and yet, Cuomo has prevented the safest, most reliable method of transporting this resource to his own constituents that are desperately seeking it.

In his letter threatening to suspend the utility’s license, Cuomo listed “short-term” alternatives to piped natural gas that he believes the company should have looked into prior to the moratorium, including importing liquified natural gas (LNG) and using virtual pipelines:

“Gas can be trucked, shipped, or barged, and other infrastructure could be proposed or additional unloading facilities installed.”

And while that’s certainly true, these alternatives also have their downsides.

The United States is the largest producer of natural gas, and a net exporter of the resource, soon to become the world’s leader in supplying LNG to the world. In other words, most of the country has become less reliant on importing natural gas from other countries. The exception to this is New England, which received 66 percent of total LNG shipments into the country through Everett, Massachusetts in 2018. At least one of those shipments originated from a sanctioned facility in Russia.

WATCH: New York has been blocking pipelines that would carry West Virginia natural gas up to the Northeast. Instead of using #WV gas, they’ve forced New England to use dirtier fuels or buy natural gas from Russia. pic.twitter.com/ExAYRG3SKp

Instead of approving pipelines that could safely and reliably transport natural gas into New York, the governor would prefer to import this gas from foreign sources, likely through America’s busiest import facility.

Virtual pipelines – or natural gas delivered by truck – is an interesting alternative to deliver natural gas to the fourth most congested city in the country, according to Business Insider. While trucking natural gas has proven to be effective and has been successfully used to transport this resource from the Marcellus into New York, virtual pipelines can also face significant reliability issues. In addition to the potential for traffic delays, there’s also the issue of weather and determining how many trucks, and the emissions that come with them, need to be added to the road to ensure a reliable supply.

As the Daily Star recently reported:

“’There is a direct correlation between the fact that we have so many of these trucks on the road and the flawed energy policy in Albany,’ said state Sen. Fred Akshar, R-Broome County, a supporter of the pipeline projects that have been stopped by the Cuomo administration.”

Gov. Cuomo has become more aggressive in his tactics to prevent new natural gas infrastructure in the state in the last five years. EID has always said it would be the state’s consumers that ultimately paid the price for these actions, and this year, that’s proving to be true more than ever before.

For now, everyone is waiting to see what will happen if the utility is unable to find a viable solution to increased pipeline capacity. Will Gov. Cuomo finally see the irony – and frankly, hypocrisy – of policies that are in direct contradiction to what his constituents currently need to ensure a reliable energy source as winter approaches?