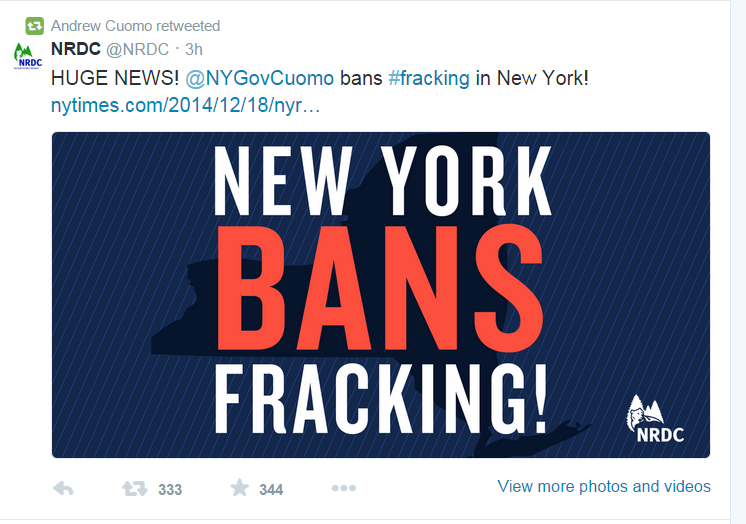 New York Governor Andrew Cuomo retweets the Natural Resources Defense Council, one of many anti-fracking groups who celebrated the Governor’s decision not to allow shale gas drilling in the state. Source: Twitter

Today, New York Governor Andrew Cuomo confirmed that the state will not allow the practice of high volume hydraulic fracturing to occur within its borders, continuing with a moratorium that has already lasted six long years. In that time, many Upstate New Yorkers have watched as their neighbors to the south prosper from Marcellus Shale development, while their own property rights have been held hostage. Today, they were shown those rights mean nothing to their elected “leaders” in Albany.

Immediately after the decision, Cuomo confirmed on social media that his actions were intended to appease the “ban fracking” groups that have been lobbying him not to allow development in the state. Through his official Governor’s account, Cuomo retweeted the praise that he received from some of the most vocal anti-fracking organizations currently active in New York:

From the beginning, Cuomo had ensured residents his administration would stick to science in making this decision. Yet today, his administration tossed out the vast amounts of data showing that hydraulic fracturing can indeed be done safely. The administration allowed emotional pleas from New York City and Hollywood actors to trump the property rights and economic concerns of residents of Upstate, many of whom have been in desperate need of jobs for several years.

Worst of all, Cuomo’s team ignored previous reports from his own Department of Environmental Conservation (DEC), which stated in 2011: “we’ve concluded high volume hydraulic fracturing can be undertaken safely.” A 2012 report from the New York Department of Health also said fracking can be done safely.

“But overall, the Democrats throughout the country have supported fracking. The president has, most of us have, and it’s worked quite well.” – Sen. Chuck Schumer (D-NY)

A quick scan of the health report that the Cuomo administration relied upon to make its decision shows a heavy reliance on thoroughly debunked studies and assessments. Notably, the report cites research that hasn’t even received funding, much less proceeded substantively, such as the Geisinger Health Systems study in Pennsylvania.

Another study included in the assessment looked at farm animals in proximity to well sites, authored by Dr. Robert Oswald and Dr. Michelle Bamberger. Although Cuomo’s team repeatedly touted “the science” in making its decision, here’s what Dr. Ian Rae with the U.N. Environment Programme said of that particular paper:

“It certainly does not qualify as a scientific paper but is, rather, an advocacy piece that does not involve deep…analysis of the data gathered to support its case.”

And yet, this report was used as a rationale for denying economic opportunity to real working families in upstate New York. Unfortunately, the other citations don’t offer any more clarity on how New York Health Commissioner Howard Zucker’s team reached its conclusions.

Curiously, Governor Cuomo made no mention of the state stopping its usage of natural gas, which of course has to imported from areas where hydraulic fracturing is occurring, including neighboring Pennsylvania. So, New York will not allow development within its borders, but it will continue to reap the extensive benefits of affordable energy as the fifth largest consumer of natural gas in the country.

Finally, it’s worth reiterating that New York City’s major shift to natural gas has improved the health and air quality of the city dramatically, as the following video shows.

Ironically, New York will continue to use increasing amounts of natural gas in order to improve public health, even as politicians in Albany claim that they cannot produce that gas locally, owing to so-called “public health” concerns.