Last week, EID carved out some time to sort through each public comment that was submitted to the U.S. Department of Transportation (DOT) as part of its proposed rule-making on new crude-by-rail guidelines.

As we know, environmental groups were quick to blast out big press releases on the day the comment period expired, boasting of individual comment submissions in the hundreds of thousands. In fact, a search of the Federal Register actually reveals that just 3,306 comments were registered, 60 percent of which were form submissions.

So, boiling it all down: how many unique letters were sent into the agency in opposition to crude-by rail transport? Barely 350.

But, to their credit, the environmental groups themselves ended up filing something that sort of came close to resembling substantive comments – kind of. So we thought we’d take a moment today to give those a closer look.

In its submissions, the Sierra Club, along with 15 other environmental groups, made a series of sweeping asks of DOT, largely basing those requests and recommendations on recycled claims they’ve made over the past 18 months. Many of these requests, though, are simply not feasible – given rail-yard capacity and the proposed timetable. If implemented, these requests would also have far-reaching negative impacts that would translate into fewer barrels of oil being delivered to North American refineries, and, ultimately, higher costs for the consumer – which is exactly what the Sierra Club wants.

Below, we run through some of the Club’s wish-list.

FACT: The proposed DOT regulations include a six-year phase-out for the DOT-111 tank car, a bizarrely ambitious timetable considering that DOT-111’s constitute nearly 70 percent of the entire U.S. fleet of tank cars — and roughly 80 percent of the Canadian fleet. According to a study released last month by the Railway Supply Institute (written by the Brattle Group):

“Even if one were to assume that these modifications could begin on January 1, 2015 … it would not be feasible to achieve PHMSA’s timeline because doing so requires that the modifications be carried out at a rate of over 1,400 tank cars per month. This rate is far in excess of the most optimistic estimates of industry capacity …” (emphasis added)

With rail yards suddenly packed with recently declared obsolete tanker cars and a limited fleet of approved cars, both the production and transportation of essential goods like crude, chemicals and refined petroleum products would be severely hampered. The Brattle Group report found that if these new regulations are rolled out next year, one third of Bakken crude – which amounts to 177 million barrels a year – could be displaced from the market.

As a main catalyst for driving down unemployment in North Dakota to the lowest in the country, oil development in the Bakken has become a success story of the U.S. energy revolution. A transport stoppage of this magnitude would have severe economic impacts all across the energy supply chain.

Sierra Club: “At a minimum, DOT must implement the proposed PHMSA and FRA design option for tank car safety improvements.”

FACT: The PHMSA-FRA option calls for a minimum outer shell thickness for the new tank cars of 9/16 inches. But if the Sierra Club is serious about updating these cars as swiftly as possible without comprising safety, the truth is: other shell designs can accomplish that. According to comments submitted by ExxonMobil:

The [8/16” shell] design has been fully engineered and can be implemented immediately. In addition, the 8/16″ achieves nearly the same safety performance as a 9/16″ car while restricting the weight increase to two percent rather than four percent for the 9/16″ car, minimizing increase in rail traffic and additional wear to the rail track infrastructure. 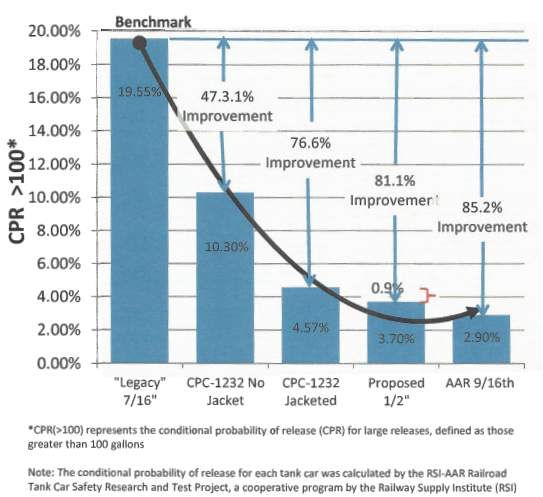 As the company explains in its comment, the weight advantage of a half-inch shell design is significant. If DOT is committed to creating a tanker car standard for the future, a lighter car is undeniably key to decreasing rail traffic and wear on the railways.

Sierra Club: “New regulations must apply to all trains carrying volatile crude in any amounts.”

FACT: A report released by the American Fuel and Petrochemical Manufacturers (AFPM) this past May largely puts to bed the mythology that Bakken crude is so extraordinarily different from other crude slates that it requires its own separate handling and transportation rules. According to the report:

“Bakken crude is comparable to other light crudes and does not pose risks that are significantly different than other crudes or flammable liquids authorized for rail transport. In particular, Bakken crudes are well within the regulatory limits for pressure, flashpoint, boiling point and corrosivity for use in Department of Transportation (DOT) approved railcars.” (emphasis added)

These findings were supported in full by the North Dakota Petroleum Council (NDPC), which issued its own report this year that sought to shed some light on the Bakken volatility question. According to the key findings of the study:

The fact is, crude originating from the Bakken does not differ in any serious, meaningful sense from the properties of crude (especially light crude) produced in Texas, Colorado, or anywhere else. And to treat it like it does is wrong.

Sierra Club: “DOT should impose speed limits on all hazardous crude transport throughout the rail lines and void rail routing of crude through populous areas.”

FACT: According to an Association of American Railroads (AAR) report:

“In August 2013, railroads self-imposed a 50-mph speed limit for trains carrying 20 or more carloads of crude oil. As of July 2014, if a train is carrying at least 20 cars of crude oil and at least one of those cars is an older ‘DOT-111’ car, that train will travel no faster than 40 mph when travelling within one of the 46 nationwide ‘high threat urban areas’ designated by the Department of Homeland Security.”

As ExxonMobil pointed out in its submitted comments:

According to Freight Rail Works, Class I railroads “account for 69 percent of U.S. freight rail mileage and 90 percent of employees….” Hence, further reducing the speed limit would be redundant and come at a high price because crude-by-rail traffic reflects only a small percentage of overall North American rail traffic.

Additionally, as the Independent Petroleum Association of America (IPAA) – of which EID is a program – explains it its submitted comments: “With mandated slower speeds, large additional numbers of tank cars will necessarily be required in order to meet already thin time lines and delivery schedules.” If this rollout proceeds, the rail car fleet will need to expand significantly and quickly in order to keep up with current volume needs – a counterintuitive side effect to say the least.

The intense focus on updating tanker car standards – the last line of defense in rail safety, not the first – does not bode particularly well for DOT’s main strategy. Likewise, overly aggressive classification reform won’t do a whole lot to keep America’s trains running on the tracks. Groups like the Sierra Club have used the public comment period to make the proposed broad-stroke regulation even less targeted. If adopted, proposals like the one from the Sierra Club would make it much difficult to transport energy resources in America, while doing next to nothing to actually improve or enhance safety. In fact, the group even discloses the true intentions of its submission in the last section of its comment:

“In finalizing these tank car regulations, DOT should keep in mind that safety and environmental protection coincides with our other national goals of reducing carbon pollution and climate change causing greenhouse gas emissions. The rapid development of crude oil from the Bakken play and Alberta tar sands has the potential to dramatically undercut the United States’ goals to reduce carbon emissions.”

Crude-by-rail transport has helped power the U.S. energy revolution, and Sierra Club advocates taking away that option through regulation to slow down development and use of hydrocarbons. They have a right to argue that, of course – but not a right to say that their agenda is concerned with anything but attacking fossil fuels. All the rest, as we’ve found, is window dressing.