The timing of the report is a bit suspect, considering two recent reports have actually found that New Mexico methane emissions are rapidly declining, based on newer data.

“Methane emissions from oil and natural gas production in New Mexico have dropped by more than 50 percent over the past year thanks to advances in technology and changes in the way wells are drilled, state regulators said Friday.”

Recent data from the U.S. Environmental Protection Agency also show that methane emissions from oil and natural gas production in the San Juan Basin have declined by 47 percent from 2011 to 2016. The San Juan Basin is home of the infamous methane “hot spot” that environmentalists have long blamed on oil and natural gas, despite conflicting analyses from scientists and federal agencies.

Furthermore, EDF is using its new report to lobby policymakers and convince them to impose additional state regulations on the oil and natural gas industry. EDF even held a joint press call with U.S. Senator Tom Udall (D-N.M.) and several environmental activist groups last week, proving that elected officials like Sen. Udall are being swayed by misleading reports produced by environmentalists.

Let’s take a look at the EDF report’s claims versus the facts.

FACT: To be clear, EDF’s analysis is based on computer simulations — and the input data for the computer simulations was outdated, to boot. EDF admits its data is based on “estimated emissions for 2015 in New Mexico.” This is an important factor to consider when evaluating the validity of the EDF report, especially since just one week ago multiple news sources reported on the most recent EPA data showing significant emission reduction over the past year, even as production is on the rise in New Mexico. 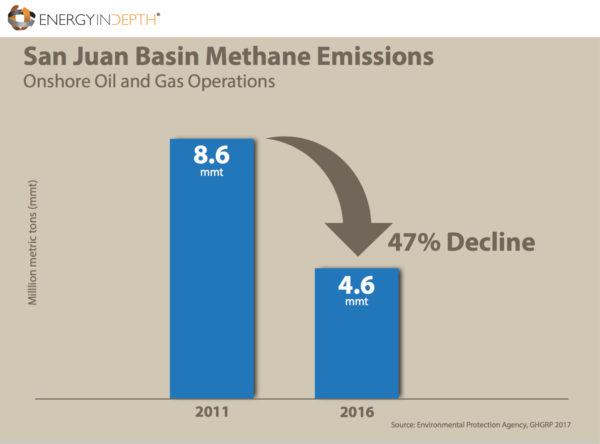 That EPA GHGRP is based on actual reported field samples from 2016, as is the New Mexico Energy, Minerals, and Natural Resources Department data that recently reported 52 percent declines over the past year. 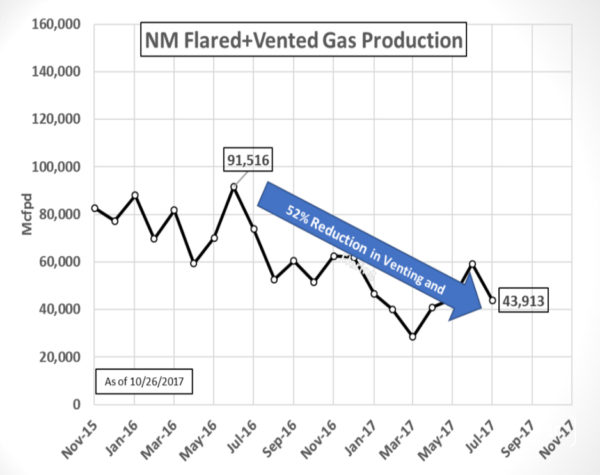 Clearly, the more recent data based on actual field samples should be considered more credible.

CLAIM: “A new report based on recent scientific breakthroughs in methane quantification finds that emissions of methane – both a potent greenhouse gas and valuable fuel source – are drastically higher than official state reports.”

FACT: As we’ve mentioned, EDF’s report only runs numbers through 2015. The new state data released last week was based on emissions data through 2016. Notably, that data reported 50 percent reductions since 2015. This pretty much explains why the EDF’s estimates were significantly higher — because EDF didn’t include the latest data that showed emissions have been cut in half since 2015! 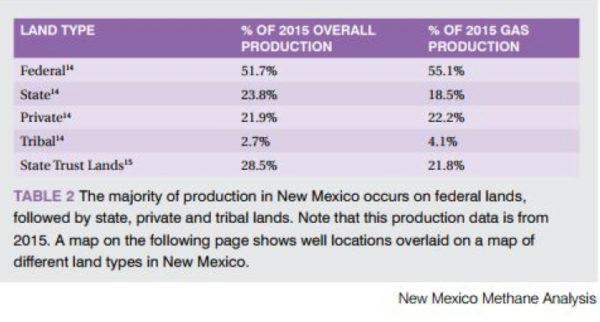 CLAIM: “The report offers insights about the largest sources of methane waste in order to help policy makers and operators identify the greatest opportunities to reduce pollution, increase efficiency, and return a valuable commodity to the local economy and state taxpayers.”

FACT: EDF and other environmental groups have long alleged that a vast majority of oil and gas methane emissions can be attributed to so-called “super emitters” present at a very small percentage of oil and gas sites. These so-called “super-emitter” sites are what EDF is referring to in the above claim, and EDF has used the notion of “super emitters” as justification for costly new methane regulations from the EPA and other federal agencies for years.

But importantly, a recent National Oceanic & Atmospheric Administration (NOAA) study has revealed that many of the studies used to support the “super emitter” theory were conducted during episodic events, which skewed emissions higher than they typically would be, casting doubt on their conclusions. As a result, these “peak” emission data were inappropriately used to calculate a normal emissions profile by the EPA in its most recent Greenhouse Gas Inventory.

In other words, official regulatory inventories are likely overestimated rather than underestimated, as EDF has repeatedly claimed.

In addition, EDF’s report claims taxpayers are losing royalty revenues due to methane not being captured. Aside from the fact that methane emissions are low and continuing to plummet, EDF does not consider the fact that the type of policy influence they are pushing for with this report will actually have a negative effect and will further reduce production on federal lands, and there’s already a hold up of production on federals due to out of control federal permitting backlog as well as the right of way application backlog holding up quick and efficient transport of oil and natural gas products to market. Last but not least, let’s not forget that uncaptured methane equals revenue losses for oil and gas producers, so there’s motivation for industry to capture all methane.

CLAIM: “New Mexico’s methane waste problem first made international headlines when a 2014 NASA study revealed a 2,500-square-mile methane ‘hot spot’ over the Four Corners region—the highest concentration of this pollution found anywhere in the U.S. Researchers later learned that pollution from New Mexico’s oil and gas facilities were largely the cause of this massive methane cloud.” Furthermore, the EDF report also claims, “Subsequent studies indicated that although the San Juan Basin includes other methane sources such as coal mines and geologic seepage, these sources are not large enough to explain the bulk of emissions, and that oil and gas development is the largest source of emissions contributing to this massive methane ‘hot spot’.”

FACT: Energy in Depth has noted before that the San Juan Basin is well-known as a large area of natural seepage – when methane emissions are naturally occurring and not the result of energy development. According to a 1999 report from the U.S. Bureau of Land Management (BLM), “Historically documented naturally occurring gas seeps throughout the San Juan Basin existed prior to oil and gas drilling operations.” Most recently in March 2017, the Associated Press reported that New Mexico state regulators concluded that the four corners methane hot spot predates oil and gas production by “millions of years”:

The most recent GHGRP data showing a 47 percent drop in oil and gas methane emission since 2011 is just the latest evidence casting doubt on the oft-repeated claim that oil and gas development are to blame for the Four Corners “hot spot” in the San Juan Basin.

On last Thursday’s EDF press call, a reporter with the Carlsbad Current-Argus asked the call organizers if oil and gas operators were already implementing technology to reduce emissions without the need for additional regulations. The response by EDF’s Director of Regulatory & Legislative Affairs is surprisingly complimentary to industry:

“I think it’s right to recognize some oil and gas producers are stepping up on this issue. For instance, XTO, which is the domestic drilling arm of Exxon-Mobil, has made big, big investments in southeastern New Mexico this year,” said Jon Goldstein, Director of Regulatory & Legislative Affairs for EDF. “Six billion dollars poured into the Permian Basin in New Mexico to buy up new acreage. And they have also announced a number of efforts to reduce methane emissions, that really show their commitment to doing this development right and doing right by New Mexico.”

On the call, Goldstein also pointed out the accomplishments by Conoco-Philips in northwestern New Mexico to reduce emissions. Despite Goldstein’s acknowledgment of industry’s efforts and strides in emission reductions, both Senator Udall and EDF will continue a regulatory crusade on the oil and gas industry at any cost. In an EDF press release, Senator Udall said:

“This report gives us an important picture of how much we could gain by taking simple steps to become more efficient. Proven, low-cost fixes could eliminate up to half of the pollution by simply plugging leaks. By capturing that taxpayer-owned resource we can make a big difference for our state’s kids,” said U.S. Senator Tom Udall.

Senator Udall said on the call that he plans to use EDF’s report as “important ammunition” in Washington, D.C., to push for implementation of the Bureau of Land Management’s much maligned venting and flaring rule. Experts agree this rule would potentially put thousands of small operators out of business, and ultimately hurt the state of New Mexico by jeopardizing the $1.6 billion in tax revenue the oil and gas industry contributed to the New Mexico General Fund in 2016. 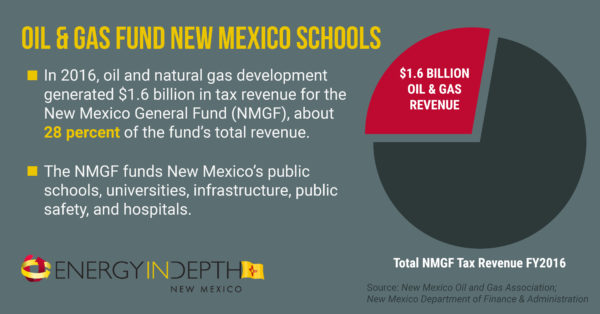 According to the New Mexico Oil and Gas Association:

“The rules are estimated to cut oil and gas production, resulting in more than $750 million in lost general fund revenue for New Mexico schools, health care, and public safety. The loss in production could also eliminate 2,200 oil and gas jobs and as many as 5,390 direct and indirect full-time jobs.”

Reports coming out of New Mexico put into context what’s at stake for the state of New Mexico should Senator Udall take marching orders from environmental groups like EDF:

“Overall, the oil and gas industry contributes about one-third of New Mexico’s budget each year and employs more than 100,000 workers.”