Hang Misses the Forest and the Trees

For the second time in as many years Walter Hang makes alarming claims his “facts” just don’t support.  It’s another case of “massive” mischaracterization of DEC data.

Walter Hang is at it again.  We know, from his earlier  efforts, the founder of Toxics Targeting, an Ithaca, New York, based environmental auditing firm, knows his way around government reports.  We also know, from previous experience, Walter tends to gloss over details, resulting in significant errors in reporting and alarming overstatements.  This case, in which he alleges “extraordinary drinking water contamination” is, perhaps, his crowning achievement in that regard, but he’s been at this gig a long time.

However, previous experience didn’t lessen the media coverage  of Mr. Hang’s latest claims, which employ the same strategies of obfuscation used in his last public outreach just a few years ago.  This time Mr. Hang is overstating water contamination, is claiming DEC never took action on matters it quickly addressed, and is mischaracterizing DEC’s actions in dealing with produced water and their efforts to plug abandoned wells.

EID dug up the data Mr. Hang conveniently left out.  Pay close attention; when you actually review the data, as Hang suggests, you come away with a much different picture. 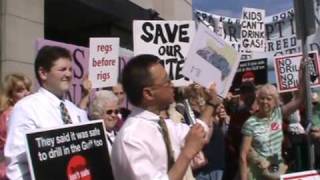 Hang provides 36 pages of data to support this claim, highlighting 29 “spills” over DEC’s 45 year regulatory history.  He claims these incidents indicate DEC cannot, and has not, done an adequate job of regulating oil and natural gas production in New York and, therefore, the SGEIS process should be stopped in its tracks.

But do these events actually show a complacent DEC, or rather a series of events expected over the course of regulating an industry for nearly 50 years?  Let’s break down the data:

So boil it all down and what do we have? 18 events  related to equipment failure or operator error over almost a half-century, over half of which resulted in less than 25 gallons of a spilled material and a handful of events attributed to natural causes, accidents, or unfounded claims.

But what of this “extraordinary drinking water contamination?”

Well, the regulatory documents outlining the two claims Hang offered show a much different set of circumstances than what he is presenting.  In fact, they show a regulatory agency taking quick action to address citizen concerns. For example:

Hang’s claim: “DEC permitted dumping of billions of gallons of contaminated gas and oil production brine into lagoons, pits, streams and onto roads without any treatment to remove toxic metals, petroleum hydrocarbons and radionuclides.”

Hang reviews over 25 years of past practice, and regulations, to describe how New York State has handled the treatment and disposal of brine from oilfield operations.   What he misses, is that most major operators in the Marcellus Shale are recycling and reusing over 90% of their wastewater, with some operators achieving 100% recycling and others planning to do so.

The Department’s oil and gas regulations, specifically 6 NYCRR §554.1(c)(1), require a fluid disposal plan to be approved by the Department prior to well permit issuance for “any operation in which the probability exists that brine, salt water or other polluting fluids will be produced or  obtained during drilling operations in sufficient quantities to be deleterious to the surrounding environment . . .” To fulfill this obligation, the EAF Addendum will require information about flowback water and production brine disposition, including: Planned transport off of well pad (truck or piping), and information about any proposed piping; Planned disposition (e.g., treatment facility, disposal well, reuse, or centralized tank facility); and Identification and permit numbers for any proposed treatment facility or disposal well located in New York. (emphasis added)

Additionally, the SGEIS notes operators prefer recycling and re-use as noticed in the following section:

Operators have expressed the objective of maximizing their re-use of flowback water for subsequent fracturing operations at the same well pad or other well pads; this practice is increasing and continuing to evolve in the Marcellus Shale.113 Reuse involves either straight dilution of the flowback water with fresh water or the introduction on-site of more sophisticated treatment options prior to flowback reuse.

Finally, even if you ignore the water recycling rate in Pennsylvania, and the clear requirements outlined in the SGEIS,  it’s easy to notice Hang has lumped all oilfield brine together, something DEC doesn’t do.  This is noticeable in a  1992 report entitled “Disposal/recovery options for brine water from oil and gas production in New York.” From the report:

In assessing the brine treatment/disposal  needs for  New York State, it  was necessary to examine the available information regarding not only the quantity of brine generated. but also its quality.

Although 2.4 million barrels of brine were generated in 1990, the majority of brines was generated from oil wells in older fields  where waterflooding operations were conducted.  Waterflooding is a technique, developed in the early 1900’s, where water is forced into an oil-producing formation to force out oil (DEC, 1988a).  The formations that generate brine from waterflooding operations are: Bradford, Chipmunk, Clarksville, Fulmer Valley, Glade, Penny, Penny and Fulmer Valley, Richburg, Scio, and Waugh and Porter.

Brines from waterflooded fields are extremely dilute compared to brines generated from formations  where  waterflooding  is  not  practiced.    These  highly diluted  brines may be discharged  directly  into  receiving  surface  waters  under  the  State  Pollution  Discharge Elimination System (SPDES) program, or recycled as part of the waterflooding operation. Thus, there is little need for a treatment/disposal alternative for these brines.   Only those brines that are highly concentrated require special considerations for treatment/disposal.” (Page 2-2, emphasis added)

Hang’s claim: “DEC identified more than 4,700 abandoned, unplugged gas and oil wells that pose major pollution hazards. DEC acknowledged this problem decades ago, but has failed to resolve it.”

Here, Hang claims DEC has little to no control over their abandoned well program and uses this as an example to paint DEC as regulatory entity that simply can’t manage its affairs.  In reality, many of these wells existed long before DEC’s regulatory enforcement began.  DEC’s current regulatory program has requirements to ensure few, if any, wells are added to this backlog which is noticed in correspondence from former DEC Commissioner Grannis following Hang’s last media outreach.  From the letter:

DEC has records on over 4,700 unplugged wells that are considered orphaned, i.e., they are not in active production and no responsible owner can be located. Virtually all of our orphaned wells were drilled before New York established a regulatory program; they may have never been plugged or they may have been plugged using older techniques that are not as reliable and long  lasting as modern methods.  There may be as many as 30,000 or more additional orphan wells. (emphasis added)

To ensure that abandoned wells do not provide a conduit for contamination of fresh water aquifers, the Department proposes to require that the operator consult the Department’s Oil and Gas database as well as property owners and tenants in the proposed spacing unit to determine whether any abandoned wells are present. If (1) the operator has property access rights, (2) the well is accessible, and (3) it is reasonable to believe based on available records and history of drilling in the area that the well‟s total depth may be as deep or deeper than the target formation for high-volume hydraulic fracturing, then the Department would require the operator to enter and evaluate the well, and properly plug it prior to high-volume hydraulic fracturing if the evaluation shows the well is open to the target formation or is otherwise an immediate threat to the environment. (SGEIS, page 7-56)

Meanwhile, as New York continue to struggle with a 10.2% unemployment rate, the state estimates natural gas development has the potential to create 54,000 new jobs and $2.5 billion in economic activity each year, which would go a long way in making sure New York is “open for business.”  Perhaps the Governor shouldn’t get hung up on Walter Hang’s extraordinary mischaracterization of the DEC’s good work.