A new peer-reviewed study published by the Proceedings of the National Academy of Sciences (PNAS) has finally put methane emissions estimates into better perspective.  While there have been countless life cycle assessments (LCA) performed over the years to determine the greenhouse gas (GHG) profile of shale gas development, there has yet to be a study in which those findings are put into uniform terms to allow for apples-to-apples comparisons. In this new study, “Harmonization of initial estimates of shale gas life cycle GHG emissions for electric power generation” – whose lead author is with the National Renewable Energy Laboratory – a research team has finally accomplished this task.

What they found was natural gas has a fairly uniform emissions profile (when used for power generation), regardless of whether it is developed from “conventional” sources or shale reservoirs. Their midpoint estimates of emissions also show that natural gas releases approximately 50 percent fewer GHG emissions than coal fired power plants, a statistic that has been widely accepted by the environmental and scientific communities, including the National Energy Technology Laboratory, The Breakthrough Institute, researchers at the University of Maryland, and even a study from Carnegie Mellon University that was partially funded by the anti-fracking Sierra Club.

While some in the scientific world use direct comparisons between LCAs, such an approach leads to mismatched data sets.  In order to provide a more uniform approach, the PNAS study used what’s known as “harmonization” to equalize the data.  For this study, the team reviewed 10 LCAs regarding GHG emissions from conventional and unconventional wells.  Unfortunately, with activists like Tony Ingraffea and Bob Howarth out there pushing Park Foundation-funded research, it is understandable that the research team found a variety of results:

The harmonization in this study allows for consistent comparisons between conventional, unconventional and coal for electric generation to more accurately determine which fuel source provides a lower life cycle of GHG emissions for power generation.  Choice of gas, modeling, power plant efficiencies, 20 year and 100 year GWPs were harmonized in order to get a uniformed measurement for the study.

Translation? Despite activists’ attempts to demonize shale gas as “fracked gas” (and thus somehow radically worse in terms of environmental impacts), the reality is that natural gas is still natural gas, which remains an affordable, clean-burning fuel option.

However, the clear difference can be seen once compared with the harmonized results of coal fired electricity.  “For coal-fired electricity generation, Whitaker et al. (23) found that the middle 50 percent of 164 harmonized estimates of life cycle GHG emissions from 53 references passing screens for quality and relevance was 940–1,050 g CO2e/kWh (full range, 820–1,370 g CO2e/kWh), with a median of 980 g CO2e/kWh.” 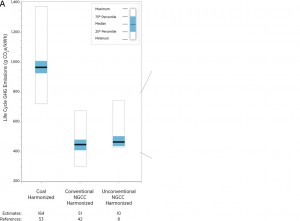 It is clear that the burning of natural gas contributes fewer GHG emissions than other fossil fuels (see chart below).  What is even more interesting is that Howarth et al. (also known as the infamously flawed “Cornell study” from 2011) is a significant outlier when discussing GHG emission studies. 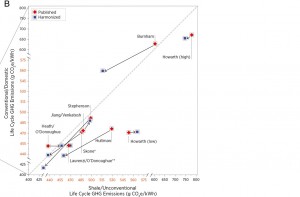 In the conclusion, the research demonstrates that natural gas can indeed be beneficial in reducing GHG emissions; based on the research team’s findings and estimates, that’s very likely the case, too.  Of course, that’s not without caveats, as the authors pointed out in the report. For example, there is some uncertainty about emissions related to liquids unloading, and the range of emissions possibilities for each fuel source is fairly large. The researchers have also stressed additional research on methane leakage specifically.

But the conclusion speaks for itself:

“We performed a rigorous harmonization meta-analysis of the available literature to establish analytically consistent comparisons of estimates of life cycle GHG emissions that reflect the latest knowledge on emission-producing activities, not only for shale gas, but also conventionally produced natural gas as well as coal. Even with the greater consistency, variability in results remained owing to differences in the studies not amenable to harmonization, such as gas type and play assessed, evaluation year, methane leakage rate, and whether coproducts were included, as well as variability in assumed emission rates from activities in the natural gas supply chain. Nevertheless, after harmonization, we find that per unit electrical output, the central tendency of current estimates of GHG emissions from shale gas-generated electricity indicates life cycle emissions less than half those from coal and roughly equivalent to those from conventional natural gas.” (p. 8)

This study helps to confirm that natural gas development is not inconsistent with environmental protection, and can indeed play a significant role in reducing greenhouse gas emissions.  According to the U.S. EPA, methane emissions from natural gas systems have actually decreased by nearly 17 percent since 1990, while the number of producing wells has doubled. As EPA Administrator Gina McCarthy stated late last year: