HBO Might Not Know It, But North Dakota Is a Really Important State – and a Great One

Of course, Oliver is not a journalist. He’s a comedian, and it’s his job to make jokes. Certainly those jokes can be based loosely on whatever facts he’s able to marshal in service of that end, and often they are. But let’s not kid ourselves on one thing: the facts are conditional to the joke, not the other way around.

There were obligatory punchlines about North Dakota being part of another country – i.e. “South DaCanada” – and de rigueur references to the Coen brothers’ movie Fargo. Don Johnson’s fictional new TV melodrama Blood & Oil, set against the backdrop of Bakken development, got a mention too.

Billboards along the state’s highways, carrying messages like “Be Kind” and “Be Polite,” were skewered in the condescending manner you would expect. And since sparsely populated North Dakota isn’t exactly Midtown Manhattan or West Hollywood, it was predictably mocked by Oliver and his team of comedy writers as a state “you probably don’t think about” and a place “used to being ignored.” That is, until North Dakota became one of the nation’s top oil-producing states. Once that happened, activist groups and their supporters from the coasts suddenly cared a great deal about North Dakota and fell all over themselves to tell the state’s residents what was best for them.

In that vein, a non-profit news organization – funded by the same donors who pour millions of dollars into anti-industry groups such 350.org, Sierra Club, Oil Change International and Earthworks – recently accused North Dakota’s energy sector of being a “serial killer.” Oliver’s team of writers relied heavily on this June 2015 piece from the Center for Investigative Reporting (CIR), but as Energy In Depth and the North Dakota Petroleum Council  have noted before, CIR’s work is full of alarmist and untrue claims about worker safety in the Bakken oil fields.

In fact, North Dakota researcher and political columnist Rob Port extensively debunked CIR’s advocacy-masquerading-as-news here, here, here and here. Perhaps most important, Port refuted CIR’s “serial killer” claims by showing a 73 percent decrease in the fatality rate from 2006 to 2014, or put another way, “the exact opposite of what the [CIR] article argues.” As Energy In Depth noted at the time, CIR’s fear mongering is deeply disappointing, because any workplace death – no matter the industry – is an unacceptable tragedy. Just as accountability is demanded of employers and contractors under federal, state and civil law, news outlets have a responsibility to take special care, stick to the facts and avoid sensationalism.

Early this morning, within hours of Oliver’s late-night sketch on North Dakota, Port had published yet another devastating fact-check. By parroting CIR’s worker-safety claims, Oliver’s sketch was “hugely misleading,” Port wrote. Another part of Oliver’s routine, based on a New York Times series, made “seriously misleading” claims about spills. “The rate of oil spills is actually down,” Port wrote, citing Energy Information Administration production data and Energy In Depth’s own rebuttal of the Times. 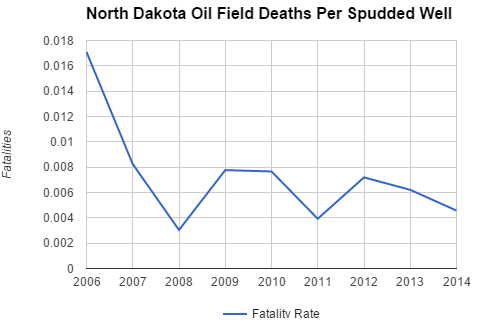 Oliver’s sketch also ridicules North Dakota regulators, based on the same Times series, for a spills policy that gives priority to clean-up actions rather than simply collecting fines. Late last year, Port revealed that the Times failed to disclose its reporting on this subject was driven by political opponents of Gov. Jack Dalrymple (R). Today, in response to “Last Week Tonight,” Port once more reminded out-of-state critics that most North Dakotans support “a common sense relationship that’s based more on getting the right outcome than exercising ideological vendettas.” If they didn’t, Port argues, then Gov. Dalrymple would have been ousted at the polls in 2012 rather than coasting to reelection:

Eventually, Oliver’s segment concluded with a mock public service announcement with some free “advice” for North Dakotans, all the way from New York City:

“We’ve become concerned that oil companies have been taking advantage of you … Just for once, it might be time to stop being polite, and start getting mad.”

To recap: Oliver is a comedian, not a journalist. We understand he writes jokes, not news stories, and we don’t begrudge his role. But we doubt his routine on “Last Week Tonight” was intended to help anyone in North Dakota in any way. North Dakota was the punchline of last night’s routine, and that more than anything else will probably get people mad, not the track record of Bakken Shale development.