Earlier this week, Bloomberg New Energy Finance (BNEF) released a report that has some great news for the climate and not-so-great news for #ExxonKnew activists: the five largest oil and gas companies in the world have made dramatic reductions in greenhouse gas emissions. From Bloomberg:

“The five biggest oil companies — Exxon Mobil Corp., Royal Dutch Shell Plc, Chevron Corp., BP Plc and Total SA — collectively curbed their pollution by an average of 13 percent between 2010 and 2015, the report said. BP cut the most at 25.5 percent. Exxon, the largest emitter among listed companies, pushed it down by 14 percent.”

“Exxon said it has spent about $8 billion since 2000 to deploy low-emission energy equipment across its operations and that it’s conducting and supporting research on technologies to make further cuts.”

The cumulative effect of these efforts is pretty significant:

“While some of the reduction from the big oil companies is probably due to the crash in oil prices that began in 2014, leading to lower activity across the energy industry, all five majors have enacted climate and efficiency policies, as well as anti-pollution measures, the report said. […] Big Oil collectively saved 56.7 million tons of greenhouse gases between 2010 and 2015.” 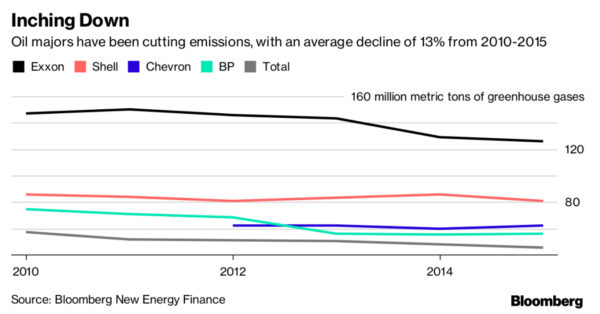 But as significant as these company-level emission reductions are, it is also important to remember the critical role that natural gas has played in the United States’ ability to reduce emissions overall. Due to the boom in natural gas production, thanks to hydraulic fracturing, natural gas prices have been slashed, leading to a significant increase in gas-fired electricity generation. Since natural gas is far less carbon intensive than traditional fuels, greenhouse gas emissions have plummeted 14 percent in the United States since 2005. In fact, the carbon savings from natural gas are far larger that the savings from renewables, as this Energy Information Administration (EIA) chart clearly shows: 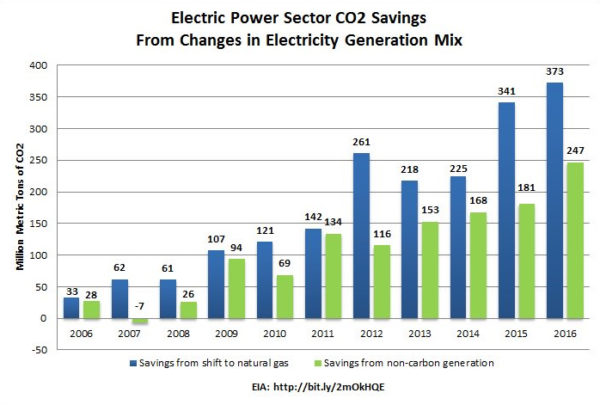 ExxonMobil is the largest producer of natural gas in the United States.

We’re certainly not holding our breath for activists – who have long claimed that they are waging their #ExxonKnew crusade in order to fight climate change – to celebrate these significant reductions in greenhouse gases. They’ve been too busy attempting (and failing) to manufacture scandal.

Meanwhile, the same groups going after Exxon are the ones who insist on denying the science regarding natural gas’ contribution to greenhouse gas reductions. Groups like Greenpeace, the Sierra Club, and the Union of Concerned Scientists have repeatedly refused to acknowledge that the IPCC, which they hail as the “gold standard” of climate science, has said natural gas is an “important reason” for the reduction of greenhouse gas emissions in the United States.

The #ExxonKnew campaign is about a lot of things: it’s about “delegitim[izing] Exxon as a political actor” or, as another activist put it, reducing Exxon “to the size where I can drag it into the bathroom and drown it in the bathtub.” But there’s one thing it’s certainly not about: addressing climate change.