Hickenlooper Doubles Down on Importance of Natural Gas

Speaking to an environmental gathering in Denver last week, Colorado Governor John Hickenlooper (D) doubled down in his support for responsible oil and gas development in the state. In particular, Hickenlooper highlighted the role of natural gas in improving the environment, helping alleviate global poverty and its role in keeping energy prices down.

Hickenlooper’s remarks at the event, hosted by the Environmental Entrepreneurs and The Alliance Center, are particularly noteworthy coming in the midst of the state’s Democratic primary in which oil and gas issues have been a top tier issue. Hickenlooper stressed the importance of natural gas in the foreseeable future, seemingly distancing himself from Democratic candidates supporting the debunked 100 percent renewable pledge. As has been well-documented, Hickenlooper has pushed back against anti-fossil fuel activists and has had some interesting run-ins with those opposing oil and gas development in the state.

Below are key excerpts of the Governor’s remarks on the importance of natural gas.

“When you look at, and I’ve spent a fair amount of time trying to assess, the energy needs, not just of Colorado, but of this country and this hemisphere and the world. And if you really believe we are going to bring another billion and a half people out of poverty, which I hope we will do, it’s what we did in the last 12 years, or 14 years. And to do that, it takes a certain amount of energy. I think what we are going to see is an increasing percentage and a large percentage of the new energy being wind and solar and renewable energy, but I think we’re still going to need a lot of natural gas, for a while, right.” (emphasis added)

Hickenlooper later added that having a clean environment as a result of natural gas and lifting the world out of poverty were not incompatible:

“But recognizing you know there are an awful lot of people on this planet that don’t have any energy at all and that, you know, we got to make sure that even as we are cleaning up our environment, we don’t deny them a future.”

The Governor also stressed the role of natural gas in keeping energy affordable in the United States, stating:

“I think what the real future… you know I like what Bill Gates said, what we want is an energy system in our future that is as reliable as the one we have now, as inexpensive, maybe even less expensive, and completely clean, right, those are our three North stars. We want to constantly getting cleaner, constantly holding our cost, maybe even getting cheaper and we want to make sure we don’t lose that reliability we’ve become accustom to. And at least for a while, horizontal drilling, fracking, is going to be part of the way to get natural gas out.”

And the governor’s assessment is absolutely 100 percent correct – natural gas is undoubtedly part of our energy future for many years to come — a key to affordability domestically and reducing poverty throughout the world.

Thanks to fracking, we do enjoy the benefits of “inexpensive natural gas” that helps to heat our homes in the winter, produce many of the products we use every day, and keep the lights on year-round. A recent report from the Business Council for Sustainable Energy, in partnership with Bloomberg New Energy Finance, highlights the fact that for the second year in a row, Americans saved 1.3 percent of their household incomes on electricity last year and 0.4 percent of their incomes on natural gas, helping drive overall energy expenditures to less than four percent of total household income.

Natural gas doesn’t just provide economic relief to American households, oil and gas development in Colorado has also been instrumental in achieving climate goals, much of it through voluntary industry innovations.

The recovery and use of natural gas has helped to reduce CO2 emissions. The EIA 2017 annual report finds that U.S. energy-related carbon dioxide emissions fell one percent from 2016 levels in 2017 and are at their lowest levels in 25 years.

“The underlying energy consumption trends that resulted in these changes — mainly because more electricity has been generated from natural gas than from other fossil fuels — have helped to lower the U.S. emissions level since 2005 because natural gas is a less carbon-intensive fuel than either coal or petroleum.” 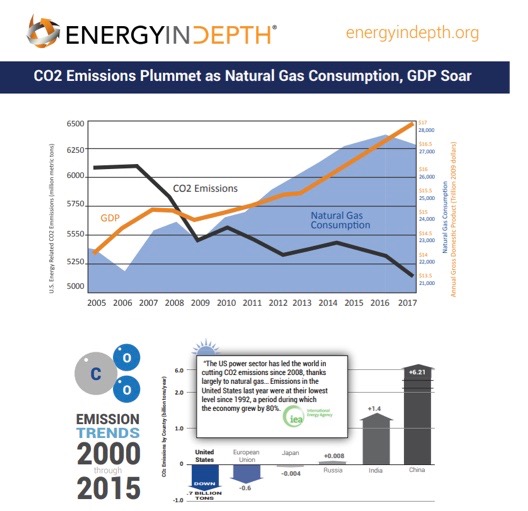 A BP report released last week further confirms the fact that the United States is leading the world in CO2 reductions this century.

“I mean if you look at it, this is voluntary, we didn’t have to pass a vote, but the oil and gas industry agreed to spend $60 million a year and they took the equivalent of 300,000 cars off the road. I mean that’s sort of… I think we got to set those high standards for ourselves that we are constantly getting cleaner.”

In Colorado, intensity can be high when it comes to the discussion of fracking, but perhaps talking about why we frack – which is of course to recover oil and natural gas to fulfill energy demands – might help to inoculate some of the rhetoric surrounding the unconventional well completion technique. It’s refreshing to see Governor Hickenlooper acknowledge the innovation coming from the oil and gas industry and how natural gas plays a key role in providing a needed energy source. The oil and gas industry in Colorado proves time and time again its track record for continued growth and innovation when developing natural gas resources for a cleaner, more reliable, and more affordable means to energy security.