Well, The New York Times is at it again.  If it isn’t Urbina throwing out easily refutable speculation regarding mortgages in the Marcellus region, it’s one of the Griswolds distorting the story of what’s happened in Western Pennsylvania without finding any time or space to even mention the mountain of data and science that exists contrary to her narrative.

Now, we get a Page One story in the Times entitled “Millions Spent in Albany Fight to Drill for Gas,” with lots of quotes from environmental groups, who have chosen not to register as lobbyists and therefore adhere to different disclosure requirements ultimately meaning they have little comparison data to show, suggesting the industry has essentially bought the entire political process.  Keep in mind this is notwithstanding the fact that, um, that industry still can’t get a permit to drill a Marcellus well.

Worse yet, reporter Thomas Kaplan refers to the professional opposition’s campaign to prevent responsible Marcellus development in New York as a “homespun” effort — just a couple of conscientious folks coming together with duct tape and bailing wire to counter the big money campaign of the oil and gas industry. It’s is a nice little fairy tale for the consumption of Times readers, many of whom consider themselves smarter than the average bear. Nonetheless, the big money is precisely where the Times suggests it is not – with the clean-energy obstructionists.  The newspaper (if you can call theTimes that today) ought to Occupy Reality Row for a change.

The key arguments of the Times are summed up in the second and third paragraphs of the piece. To wit:

Companies that drill for natural gas have spent more than $3.2 million lobbying state government since the beginning of last year, according to a review of public records. The broader natural gas industry has been giving hundreds of thousands of dollars to the campaign accounts of lawmakers and the governor. And national energy companies are advertising heavily in an effort to convince the public that the extraction method, commonly known as hydrofracking, is safe and economically beneficial.

Environmental groups, with far less money at their disposal, are mounting a more homespun campaign as they warn that hydrofracking — a process in which water mixed with sand and chemicals is injected deep into the ground to break up rock formations and release natural gas — could taint the water supply and cause untold environmental ruin.

Of course, no actual evidence exists tying hydraulic fracturing to water contamination or “environmental ruin,” acknowledged by no less an authority than Lisa Jackson, the current EPA administrator.

But let’s leave that aside for the moment. The bigger problem here is that the paper misses the proverbial elephant in the room – the fact many of the quoted environmental groups don’t register as lobbyists and, thereby, avoid  having to report their expenditures as such even though that’s what they are plainly doing.  It also ignores the behemoth budgets of the various folks it quotes as “homespun.”  Indeed, the only spinning going on here is that of the Times itself in constructing this narrative out of whole cloth.

Kaplan, the reporter, says in his piece that “the money those (gas) companies have spent in New York since the beginning of last year is more than four times the roughly $800,000 that the state’s most prominent environmental groups have spent on their lobbying efforts,” and attacks business groups such as Clean Growth Now while ignoring the cartel of special interest groups that are spending money against natural gas development faster than the Federal Reserve can print it.  He never identifies who spent that $800,000 or those who aren’t reporting at all and should be.  The Catskill Mountainkeeper is not listed, for example, despite the fact it is everywhere lobbying against natural gas development.  Check it out here by typing in “Catskill.”  While you’re at it, try looking for Earthjustice, Earthworks,  the Delaware Riverkeeper, Otsego 2000, the Community Environmental Defense Council or Catskill Citizens for Safe Energy.  They’re not to be found either.  And, what about the Park Foundation?  Forget about it!

Let’s take a look at some of those funders of the Halloween Contest the Times thought was so “homespun.”  They are listed on the Clean Water Not Dirty Drilling Facebook page.  First, there is the Catskill Mountainkeeper, which is led by Ramsay Adams.  He is not only the Mountainkeeper, but son of John Adams who has, in recent years, sat on the boards of the Mountainkeeper, the Natural Resources Defense Council (NRDC) and Delaware Riverkeeper, where his many Rockefeller family associates have also sat, not that there’s any big money there, of course.

Then there is the Citizens Campaign for the Environment (CCE).  This is a 501(c)4 political organization that spent $2.9 million in 2010 — but didn’t really thing it was necessary to register as lobbyists in Albany.  Opposing hydraulic fracturing in New York State is one of its priorities.  The organization says of itself “In 2010, CCE was instrumental in garnering a six month moratorium on hydraulic fracturing in New York State.”  It has a sister 501(c)3 organization known as the Citizens Campaign Fund for the Environment which spent another $442,000 in 2010.  CCE prepared a very flawed document (still referring, for example, to “hydrofracking waste lagoons” that no longer exist) entitled What’s the Hydro-Fracking Rush? with the help of some big money folks. It acknowledges the report “could not have been prepared without the generous support of the Park Foundation.”  Well, that’s a surprise, isn’t it?

The Park Foundation has been exposed numerous times on this site.  It is behind nearly every anti-gas initiative there is.  It funds Josh Fox.  It funds the Community Environmental Defense Council,  whose dime-store lawyers prey on naive communities on the periphery of the gas region — peddling the false idea that New York communities can ban natural gas development despite strong pre-emption provisions enshrined in state law.  It funds the Community Environmental Legal Defense Fund that does the same thing a different way in both Pennsylvania and New York.  It funds other Halloween Contest promoters such as Earth Justice, Earthworks, Environmental Advocates of New York and NRDC (see below).

Earlier this year, Park also funded the “Catskill Mountainkeeper’s education and outreach program to stop unsafe gas drilling” meaning that six of the eight entities behind the “homespun” Halloween contest feed at the Park Foundation trough, to say nothing of Common Cause, also cited by the Times, which received Park funding for “research and outreach projects in New York and Pennsylvania focused on the gas industry’s campaign finance and lobbying expenditures and activities.” 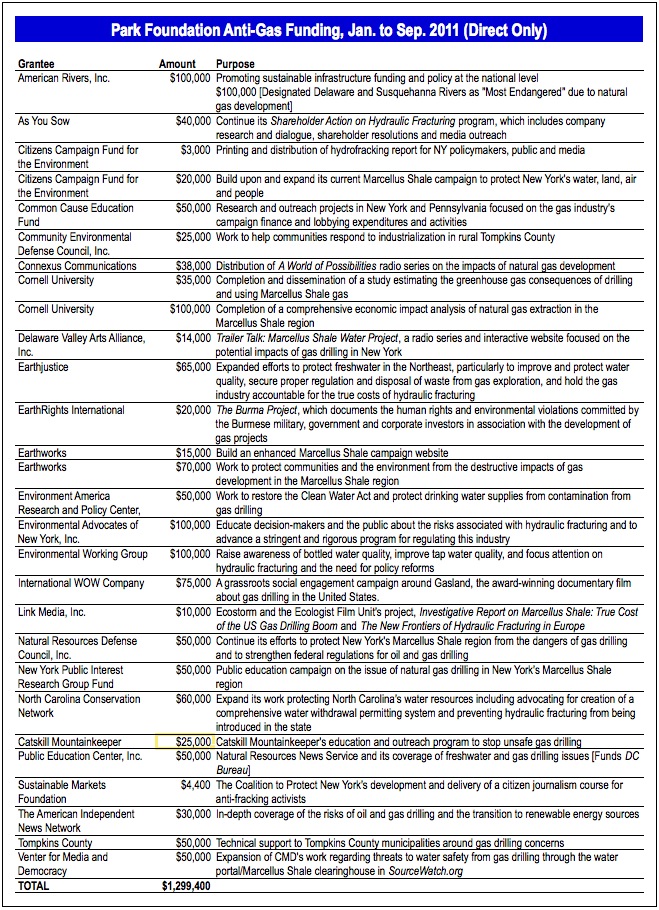 That’s $1.3 million from one umbrella organization.  Perhaps the Times can’t see the elephant in the room, but it ought to be able to see an octopus with its tentacles in nearly one of the various “grass-roots” organizations engaged in these supposedly “homespun” activities.  Whatever happened to “all the news fit to print” – is it now all the propaganda we want you to read courtesy of the Park Foundation and its puppet, Common Cause?

And, this is far from all.  There is a lot more money involved that each of these entities raises from other sources such as the Heinz Endowments(which gave $150,000 to Cornell University for its trash economic study of Marcellus Shale impacts and over $500,000 of other anti-gas funding to different recipients).  NRDC, for example, has $181 million of nets assets to its own account and spent $89 million last year.  This included an aggressive across the board effort to fight natural gas development and “close the Halliburton loophole” (non-existent, of course, but mentioned in their 2009 tax return as part of their program).  This involved placing not one, but three, current or former senior attorneys on the New York State Hydrofracking Advisory Committee where they work alongside other Friends of Park (e.g., Environmental Advocates of New York) to undermine the Governor who appointed them.

NRDC is also apparently still paying John Adams, arguably the head of the octopus.  Their latest publicly available tax return (FY ending June 30, 2010) states “after thirty-five years of committed service as NRDC’S founder and President Mr. John Adams retired on April 1, 2006 and became a part-time consultant for received $158,500 for these services” (see p. 39 of return).  Presumably, this helps pays him for his work with his son (who is nowpursuing public money to build a brewery) as well as the Riverkeeper and other “homespun” organizations favored by the Times.  Perhaps, he also gave NRDC the advice to invest $725,852 in that Cayman Islands based fund, which owns natural gas fired power plants (p. 111-113).   It’s all so “homespun” isn’t it?

Let’s not forget Earth Justice, which readers of this blog will recall engineered an unsuccessful form letter campaign to try to convince the Federal Energy Regulatory Commission(FERC) to forestall approval of the Marc-1 Pipeline in Pennsylvania.  They generated 22,000 basically identical letters, almost all of which were from far outside the affected region, which is the way it almost always is, of course.  Fortunately, FERC didn’t buy that nonsense but Earthjustice plans to sue, of course, litigation being one of its claims to fame.  It has $39.2 million in net assets and spent $25.8 million last year on such sordid opposition to, well, just about anything.

Then there is Earthworks, which describes its mission as “protecting communities and the environment from the impacts of destructive mineral development.”  It has net assets of $822,000 and spent $1.8 million last year – chump change in the world in which it operates.  It is funding a film project called the Next Best West which is intended to demonstrate how “a new understanding of progress may be our best hope for a bright and healthy future.”  We can all be sure where that one will end up, with the suggestion everyone but the proponents drive a Smart car and crowd into cities to live like sardines.

The Delaware Riverkeeper, another of those entities that has been in the Adams-Rockefeller orbit until recently, has net assets of $342,000 and spent $961,000 in 2009.  It says its mission is to “preserve, protect and restore the Delaware River Watershed’s natural balance”  whatever that means.  Once again, it a pretty fair bet that doesn’t include much of anything happening in our portion of the watershed.  It is working with Park Foundation funded American Rivers right now to upgrade the Delaware River to an “Exceptional Value” classification that would stop every bit of development in the region.

Finally, there is Environmental Advocates of New York, which spent $986,000 last year, including funding of aerial photos of Pennsylvania drilling sites, and has been particularly outspoken on the subject of New York State’s proposed new natural gas regulations making numerous statements that appear to put it at serious odds with Governor Cuomo even it has a seat on the state Hydrofracking Advisory Committee.

So, where does all this leave us?  Well, as the following table illustrates, there is no lack of money on the anti-gas side.  Just the eight organizations cited by the Times for their “homespun” environmentalism, represent annual funding of over $121 million and several have the luxury of not having to report their lobbying.  Compared to this, the $3.2 million spent by the industry, is a pretty paltry sum indeed.  Moreover, most of these entities are non-profits that do not have to register as lobbyists, which, of course, allows them to pose as David against Goliath.  While we proudly acknowledge our funding by industry, they pretend to be disinterested non-partisan public servants, when the truth is they have access to the biggest money of all.  There’s nothing “homespun” about their message.  When we hear Josh Fox speak out at a rally, the Slottje’s promote illegal local laws bans and the Catskill Mountainkeeper agitate for opposition to New York’s regulations, we’re hearing from the same people – just using different voices.  That’s not “homespun” – that’s spinning by the best of them, the Park Foundation and its motley crew of useful idiots.