The ICR has been widely viewed as the first step toward implementing unnecessary and burdensome methane regulations on existing U.S. oil and gas facilities — rules that are, thankfully, now very much in doubt. Predictably, the U.S. House Democrats Committee on Natural Resources has responded to Pruitt’s decision with a letter requesting EPA resume collecting methane emissions data. And not surprisingly, each paragraph of the letter includes misinformation and flat-out inaccuracies. Here are the letter’s most misleading claims, followed by the facts.

CLAIM: “Methane is a … precursor to ground-level ozone, one of the criteria pollutants under the Clean Air Act… Controlling methane emissions from oil and gas operations is therefore important not just for the climate, but also for air quality and human health.”

As the EPA explains,

“Ground level or ‘bad’ ozone is not emitted directly into the air, but is created by chemical reactions between oxides of nitrogen (NOx) and volatile organic compounds (VOC) in the presence of sunlight… ”

Natural gas emits about one-fifth the nitrogen oxide as coal. Considering natural gas use for electrical generation has increased 78 percent (21 percent to 34 percent) since 2005 and has overtaken coal as the top fuel source for electrical generation, it’s no wonder why NOx emissions have dropped 38 percent in that timespan. As the following EID graphic illustrates, NOx and other harmful emissions have declined dramatically as natural gas use has ramped up.

Publicly available information also demonstrates oil and gas production is not the significant contributor to ground-level ozone levels. Vehicle exhaust adds far more non-methane volatile organic compounds (NMVOCs) and nitrogen oxides (NOx) — which, again, are the primary precursors to ground-level ozone — to the atmosphere than oil and gas production. As the following quote from David Brymer of the Texas Commission on Environmental Quality from the Fort Worth Star-Telegram notes:

“Since nitrogen oxides are the dominant precursors for ozone in Texas, not methane, the state has taken vigorous steps to control it.”

FACT: The “volatile organic chemicals” being referenced here are actually non-methane volatile organic compounds (NVOCs) — a term that was created to specifically identify prominent ground-level ozone precursors. Why? Though methane is volatile, it has a minimal role in ground-level ozone formation when compared to NVOCs such as benzene and toluene. Methane is also typically excluded from being grouped with potentially harmful NVOCs because it is not considered a significant air pollutant and there is no evidence it is carcinogenic.

Methane only has adverse health effects at very high concentrations — concentrations much higher than what is emitted by oil and natural gas systems, as Reference.com notes,

“No long-term health effects are known to be the result of prolonged exposure to methane gas, and it is quickly removed from the body through a variety of bodily functions.”

That said, considering NVOCs are the concern, it would stand to reason that EPA should be addressing those emissions rather than methane.

And to be clear, although oil and gas production does emit NVOCs, numerous reputable studies have found oil and gas production site emissions are protective of public health, including a recent Colorado Department of Public Health and Environment (CDPHE) assessment of 10,000 air samples from areas near “substantial” oil and gas operations that found, “All four cancer-causing substances (benzene, ethylbenzene, formaldehyde and acetaldehyde) were within acceptable risk range, even for combined exposures.”

The assessment also noted, “All measured air concentrations were below short- and long-term ‘safe’ levels of exposure for non-cancer health effects, even for sensitive populations” and concluded,

“the risk of harmful health effects is low for residents living [near] oil and gas operations,” and that “results from exposure and health effect studies do not indicate the need for immediate public health action.”

CLAIM: “EPA’s data show that since 1990, methane emissions from oil and gas field operations have increased 45 percent. The ICR is critical to understanding why those emissions continue to increase, and what can be done to turn that around.”

But instead, the letter focuses on field production emissions, which — according to the EPA — have gone up. But the letter fails to note that those upward revisions are highly questionable and definitely in dispute.

That’s because starting in 2016, EPA began extrapolating reported leakage rates from larger facilities onto smaller facilities, basing this on the notion that they have similar leakage rates (which they obviously don’t). EPA is also now inappropriately including inflated gathering and boosting station emission estimates in field production segment emissions in its emissions inventories. These recent changes have led to field production segment emissions more than doubling compared to previous inventories.

This cherry-picking of data that is in dispute is yet another example of oil and gas development opponents exaggerating the industry’s contribution to overall methane emissions, which have actually been in decline since the shale revolution began.

CLAIM: “The BLM rule is designed to ensure that companies do not waste valuable natural gas belonging to the American people, who are entitled to royalties on the gas when it is captured and sold.”

FACT: Fracking opponents have frequently used this argument to justify the Bureau of Land Management (BLM) and EPA methane rules, but the fact remains that industry has every incentive not to waste its product by allowing it to escape into the atmosphere. Methane is the primary component of natural gas, after all, so reducing methane emissions is in the best interest of every oil and natural gas producer.

Numerous reputable studies show the industry is doing just that.

The EPA estimates methane emissions from natural gas systems is just 1.4 percent, which falls in line with numerous other reputable studies — including several spearheaded by the Environmental Defense Fund, as the following EID graphic shows.

As the above chart illustrates, this is well below the 3.2 percent leakage rate that the scientific community in general agrees is the threshold for natural gas to maintain its climate benefit over coal.

CLAIM: “One of the arguments that we heard repeatedly from opponents of the (BLM methane) rule was the fallacious charge that it was an air quality rule, and the EPA is the appropriate agency for such rules.”

FACT: This is an ironic statement, considering that in the same letter the authors claim the EPA’s methane regulations are “important not just for the climate, but also for air quality and human health.”

So, essentially, this letter is confirming that the BLM and EPA methane regulations are indeed air quality rules on some level in the same breath that it argues they aren’t! The EPA happens to be the only entity given the authority to regulate air quality. But the fact remains that there is no evidence that methane emissions from oil and natural gas systems are affecting air quality at current emissions rates, which is just one of the many reasons there has been so much pushback against the methane rule to begin with.

CLAIM: “Even the March 1, 2017, letter you received from eleven governors and states attorneys general admits that the cost of the ICR is negligible: no more than $5,800 per company or roughly 0.1 % of the average cost of an onshore well according to the Energy Information Administration. This is a miniscule price to pay for critically important data, which you would hope the oil and gas industry would happily provide in the service of more accurate and less onerous final regulations.”

FACT: The American Petroleum Institute (API) has noted that EPA’s estimate that the ICR would cost $37,692,625 is way off. More than $473 million off, to be exact. API analysis found that the actual cost to operators would be $511 million for the initial phase of the two-part ICR process.

“An operator is likely to require approximately 5 hours per facility to complete and submit the Part 1 ICR form, as proposed, based on a pilot attempt to complete the Part 1 survey. Across all onshore production facilities in the U.S., that translates to an industry burden of over $511 million, or more than 30 times higher than EPA’s estimate, to complete Part 1 of the ICR.”

Joint comments by the Independent Petroleum Association of America (IPAA) and American Exploration and Production Council (AXPC) note that the second phase of the ICR would tack on another $3.3 million, bringing the total average price tag for operators to more than $78,000.

But even if the EPA’s ICR estimate were accurate, dismissing an annual cost that could be as high as $5,800 as “negligible” demonstrates an apparent (and perhaps deliberate) lack of fundamental understanding of the U.S. oil and gas industry.

As EPA has correctly acknowledged, methane emissions at marginal wells are “inherently low” and “many well sites are owned and operated by small businesses.”

So the “negligible” added expense the ICR would have imposed is just one real-world example of why methane regulations would hurt small producers the most, something EID has noted many times before. Far from “Big Oil,” there are thousands of family-owned businesses that operate marginal wells — smaller wells that produce 15 barrels or less per day, or 90,000 cubic feet or less of natural gas per day. These companies faced the biggest challenges during the low commodity price environment of 2015 and 2016, and to these companies, $5,800 of added expense is a big deal.

Small producers’ contribution to the health of the industry and economy as a whole are anything but “negligible,” however. The Interstate Oil and Gas Compact Commission’s (IOGCC) 2015 Marginal Well Report finds the elimination of both marginal oil and natural gas wells developed in 2015 would trigger an estimated direct loss of 57,560 jobs in the oil and gas sector and $4.4 billion in direct earnings within the survey’s 29 states. And it is important to note that report actually only looks at “stripper wells,” which are wells producing 10 barrels or less per day and 60 thousand cubic feet or less of natural gas per day. So if you were to evaluate job and GDP losses from eliminating all marginal wells, the impact would be even greater, which is why “negligible” costs such as those that would be created by the ICR are anything but.

What is negligible is the contribution of smaller wells to overall methane emissions, as the EPA has acknowledged and the following EID chart illustrates. 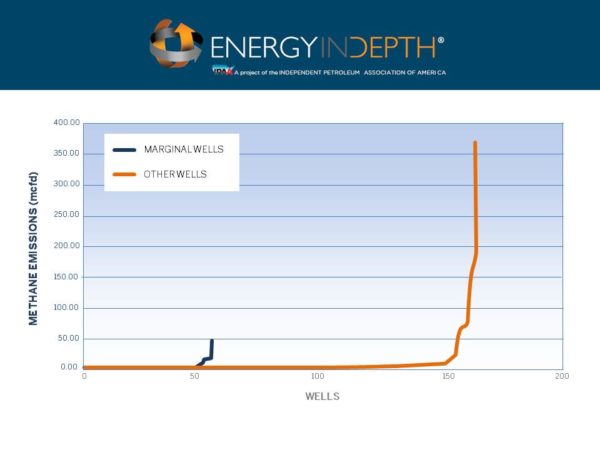 This why smaller wells were originally exempt from the Obama administration’s Control Techniques Guidelines (CTG) for methane. That exemption was eliminated without explanation in October, but fortunately, the current EPA administrator appears to understand why the exemption existed in the first place.

CLAIM: “Withdrawing this common-sense and inexpensive data-gathering exercise at the behest of a few states simply because it takes climate change seriously is irresponsible and counterproductive.”

FACT: EID has done the math and found the EPA’s methane rule would yield only 0.0047 degrees Celsius of avoided warming the end of the century.

This miniscule figure further illustrates the fact that the oil and gas industry’s overall contribution to methane emissions have been greatly exaggerated. Numerous recent peer-reviewed studies show that global methane emissions are actually being driven by microbial sources such as wetlands, agriculture, rice paddies and even man-made reservoirs, rather than oil and natural gas development. So considering the costs of the EPA’s methane rule has been significantly underestimated and that the regulations it would support would yield virtually no climate benefit, the ICR is anything but a “common-sense and inexpensive data gathering exercise.”

The ICR, is in fact, expensive and counterproductive. Thankfully, the new EPA administrator has recognized this fact and should ignore the House Democrats’ letter for that and the many other reasons listed above.