Nearly 20 wealthy foundations funneled hundreds of millions of dollars between 2011 and 2015 into a network of environmental organizations to attack the fossil fuel industry, according to a new study published this week by Matthew Nisbet, Ph.D., a Professor of Communication Studies at Northeastern University. The study, which only analyzed a subset of the organizations active on climate issues, provides a glimpse at the massive funding apparatus behind the anti-fossil fuel echo chamber – and the lack of scrutiny that this big money campaign has faced.

Energy In Depth has previously exposed how wealthy anti-fossil fuel foundations like the Rockefeller Brothers Fund and Rockefeller Family Fund are financing a wide range of activist groups. These foundations have admitted to funding studies that attack the oil and gas industry, media outlets that provide favorable coverage of those studies, and activist groups to trumpet their anti-fossil fuel agenda online and in the press.

Nisbet’s paper notes that there has been relatively little scrutiny of the presumed independence of these voices in the media:

“When left‐of‐center and progressive foundations are covered in the U.S. press, coverage tends to be predominantly positive and uncritical, deepening a lack of public scrutiny relative to their philanthropic activities, successes, and failures. These grantmakers are also among the major patrons for academics and their work, and are the main supporters of the rapidly growing nonprofit journalism sector. Many scholars and journalists therefore have reason to be cautious in their assessment (Reckhow, 2013).” (emphasis added)

Nisbet emphasizes how the 19 foundations examined in his study, including the Rockefeller Brothers Fund, Bloomberg Foundation, and Hewlett Foundation, have shaped the conversation on climate change, due to the immense concentration of grant money:

“Far from being passive supporters of actions to address climate change, major U.S. foundations for several decades have played an active role in defining a common roadmap for their grantees and partners. By framing the challenges, defining the priorities, and promoting specific ideas, philanthropists have actively shaped common ways of thinking that have bound together otherwise disconnected organizations and leaders into shared approaches and strategies.” (emphasis added)

Nisbet cited other literature that described the impact of the foundation approach as an “outsize megaphone, both actively shaping how people view social problems and championing specific methods through which these problems can be addressed.”

The largest of these foundations is the Energy Foundation, and the study describes how its size allows philanthropists to exert major control over the environmental community to focus work on its preferred policies:

“Launched in 1991, the Energy Foundation has been the main instrument that a network of influential U.S. philanthropists has used to define a portfolio of policy options, political strategies, and energy technologies to address climate change. Set up by way of large block grants from the Rockefeller Foundation, Pew Charitable Trusts, and MacArthur Foundation, and supported in later years by the Hewlett Foundation, Packard Foundation, and other funders, the principal function of the Energy Foundation has been to leverage money in a highly concentrated pattern on behalf of policies that shift markets, industry, and consumers in the direction of renewable energy technologies and energy efficiency practices.” (emphasis added)

The outsized influence exerted by a small number of wealthy foundations has led to group-think in the climate change conversation and has increased political polarization around the issue by focusing on divisive, anti-fossil fuel policies. Nisbet cited a few specific strategies supported by the foundations that have had this impact:

“Yet related to these strategies, campaigns opposing the Keystone XL oil pipeline and natural gas fracking along with new causes related to racial, gender, and identity‐based justice have also likely contributed to deepening political polarization, serving as potent symbols for Republican donors and activists to rally voters around. These issues also divide liberal and centrist Democrats, and were a major point of contention during the Democratic primaries.” (emphasis added)

The efforts to support the agendas of these foundations is all encompassing and includes communications, promotion of renewable technologies, and efforts to limit fossil fuel development. In fact, the “Park Foundation and Rockefeller Brothers Fund…are notable for supporting strategies that directly target the fossil fuel industry by way of communication, media, and mobilization campaigns,” Nisbet writes. 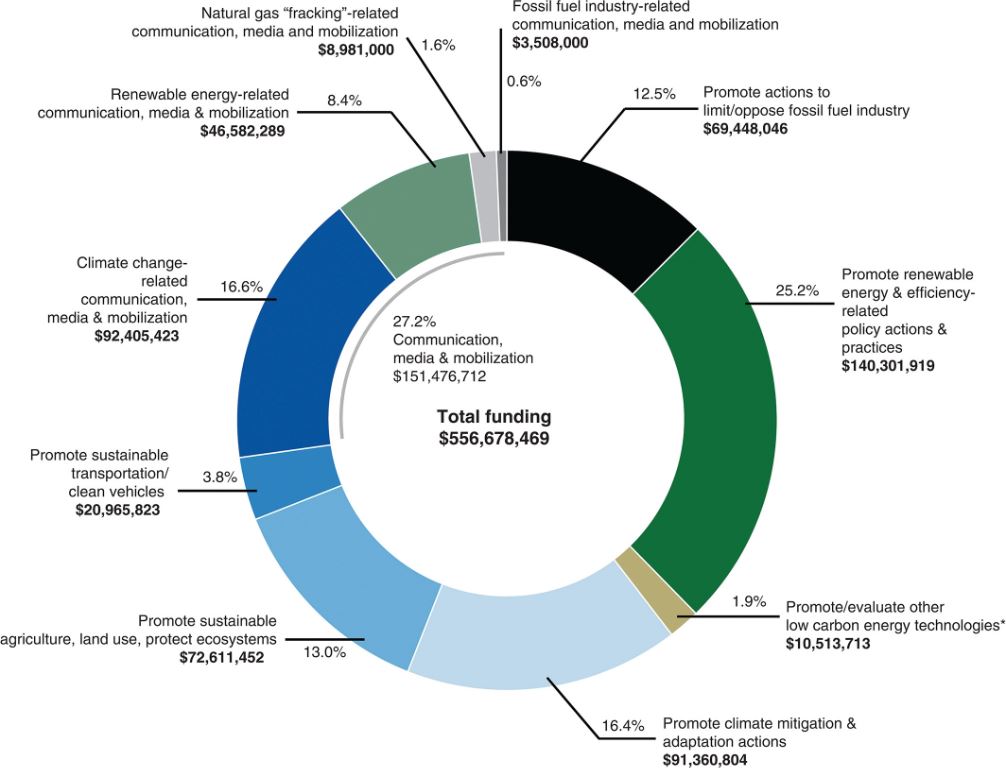 Meanwhile, the analysis of foundation spending shows alternative ways of reducing greenhouse gas emissions that contribute to climate change remain largely ignored or even attacked. For example, the study found that $6,834,000 was spent specifically to “oppose, limit natural gas development,” even though increased use of natural gas has allowed for a significant reduction in greenhouse gas emissions in the United States

Emissions of carbon dioxide in the United States have decreased 13 percent from 2005-2016 while natural gas consumption increased 25 percent over the same period.

The study breaks down the attack on natural gas:

“Specific to natural gas fracking, $6.8 million was provided to restrict or ban drilling, $2.1 million to protect drinking water supplies; and $3.9 million for research on health and environmental impacts. To support efforts to ban/restrict fracking, Schmidt ($3.3 million), Hewlett ($1.5 million), Park ($1.1 million), and Heinz ($1 million) were the leading funders. Schmidt gave to a mix of national‐ and state‐based groups. Hewlett gave primarily to the Colorado Conservation Fund ($1.3 million). Park gave primarily to groups working in New York state, and Heinz to groups in Pennsylvania. Relative to protecting drinking water supplies, major funders included Heinz ($1 million) for efforts in Pennsylvania; and Park ($760,000) for work in North Carolina and New York. Major funders of research on fracking’s health and environmental impacts included Heinz ($2.7 million), Park ($780,000), and Schmidt ($390,000). These funds were given to a mix of universities and environmental groups.”

The foundations only granted $1.3 million to support work on carbon capture and sequestration and just $55,000 to promote “fossil fuel industry innovation to limit emissions.”

Nisbet concludes his paper by predicting the next steps in the anti-fossil fuel campaign and the public’s ability to hold these wealthy foundations and their political allies accountable:

“In coming years, as the endowments of major foundations continue to grow, providing philanthropists with ever greater resources, they are likely to play an even more active and strategic role in funding actions to address climate change in the United States and elsewhere. In 2017, the Hewlett foundation, for example, announced it would spend $600 million over the next decade to combat the problem (Gunther, 2018). By framing the challenges and defining the solutions to climate change, as they did in the years following the defeat of the cap and trade bill, Hewlett and other major philanthropies are likely to deepen their ability to bind together organizations and leaders into shared approaches and strategies. In an era of political dysfunction and diminished public spending, many will look to philanthropy and their resources for answers. Yet in contrast to elected officials and government agendas, there are few channels to hold funders accountable for their decisions or to a shine a light on their actions…

“Financial support for efforts restricting fossil fuel development and for turning public opinion against the industry is also likely to expand. Examples include municipal lawsuits filed against fossil fuel companies to recover damages for climate change impacts; and decisions by states and cities to divest their pension plans of energy-related stocks. To aid these efforts, some funders will also deepen their support for journalistic investigations of the fossil fuel industry. Such strategies, however, are likely to intensify controversy over the ties between funders, advocacy groups, and journalists.” (emphasis added)