“When you create doubt, no matter how specious your argument is…it doesn’t matter if you go out and say something ridiculous. … The whole purpose is to create inaction and create a feeling that we do not know what is happening when we actually know exactly what’s happening.”

In the past week, we’ve covered three separate issues where anti-fracking activists categorically reject any scientific conclusion that differs from their preconceived ideology: air emissions and methane leaks, groundwater contamination, and public health. In this latest installment, we’ll look at activist claims on well integrity, “leaky” wells, and failure rates.

To be sure, we’ve covered this issue extensively before (see here, here, and here). But we continue to see activists claim excessively high failure rates as a means of scaring the public and, by extension, trying to shut down development altogether.

Without a doubt, the most commonly cited source of this claim is anti-fracking activist Tony Ingraffea, who has claimed frequently that “industry documents” reveal astronomical leakage rates from existing wells. Yoko Ono penned a letter to the editor in the New York Times leveraging Ingraffea’s “research,” and we all know about Josh Fox’s short film “The Sky Is Pink” that relied heavily on that same information. The Sierra Club has encouraged its members to read Ingraffea’s work on failure rates, and Food & Water Watch similarly claims that 50 percent of “fracking wells” will leak over a 30-year period.

The reality, however, is that these anti-fracking activists are deliberately misleading the public about well integrity and failure rates.

One of Ingraffea’s “industry documents” is a decade-old chart from the now defunct Minerals Management Service. You probably haven’t heard much about MMS in the context of hydraulic fracturing, because its jurisdiction was offshore, not onshore where the big shale plays are actually located. In fact, the chart was an assessment of deepwater oil and gas wells in the Gulf of Mexico, and the caption explicitly stated that “land locations” were excluded.

The situation gets even more embarrassing for so-called “Godfather of Cement” Tony Ingraffea and his activist following, though. The data presented in that chart were not examples of leaks, but rather instances of what’s known as sustained casing pressure (SCP). Anyone with even a passing knowledge of the oil and gas industry knows that SCP is the accumulation of pressure in a well; it’s not the same thing as a leaking well, nor does it necessarily indicate the well is leaking.

There are also a variety of tools and processes to address SCP. How do we know that? Because the same article that included Ingraffea’s bombshell chart was written entirely to explain how the industry can prevent, reduce, or address SCP.

The entire basis for claiming “half of all shale wells leak” is data that refer neither to shale wells nor leaks. 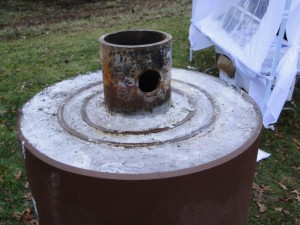 What a properly cased and cemented well looks like.

As it turns out, activists claiming high leakage rates have such a dubious case that they can’t even get their own stories straight. In a column for USA TODAY, Josh Fox argued that five percent of wells experience “an immediate failure of the concrete casing.” Eight months later that figure climbed eight-fold, when Fox told DemocracyNow! that “casing that protects the groundwater cracks in 40 percent of the cases.” That same month, Fox told Al Jazeera the failure rate was closer to “50 percent” (20:16). In his short film “The Sky Is Pink” (09:23), Fox established a new number: 16.7 percent. Finally, during his media tour for Gasland Part II, Fox told Platts that the rate is actually 35 percent worldwide, citing the Society of Petroleum Engineers.

The last point is noteworthy, because Fox and many others have tried to establish their credibility by saying the Society of Petroleum Engineers is their source. But SPE denies that it ever made that assessment. In July 2013, a spokeswoman for SPE told the Daily Kos:

“Neither SPE, nor anyone representing SPE, has ever made the claim that 35% of the world’s [oil and gas] wells are leaking. We have no basis for making such a determination.”

If we look at real data, we can see why opponents have had to resort to such raw and deliberate deception.

An August 2011 report from the Ground Water Protection Council examined more than 34,000 wells drilled and completed in the state of Ohio between 1983 and 2007, and more than 187,000 wells drilled and completed in Texas between 1993 and 2008. The data show only 12 incidents in Ohio related to failures of (or graduate erosions to) casing or cement – a failure rate of 0.03 percent. In Texas, the failure rate was only about 0.01 percent.

Most of those incidents, by the way, occurred before modern technology and updated state regulations came online over the past decade.

Granted, a failure rate of anything above zero percent leaves room for improvement, and there have been casing failures in different basins across the country. These are serious issues, and strong rules and regulations are in place to address and minimize those risks. In fact, major producing states like Texas are moving forward with updated regulations on well construction to make sure these and other potential risks are managed properly. Pennsylvania, which is on track to become the second-largest gas producing state in the country, updated its regulations in 2011.

The industry has also adopted and published a series of recommendations and best practices. The Marcellus Shale Coalition has a document outlining responsive actions, and the American Petroleum Institute has a lengthy list of well construction and integrity guidelines, which include actions designed to minimize or, more often, completely eliminate the risk of well integrity failure.

The activist talking point on well casing failures is not based on science or hard data. It is purely a manufactured story line; a series of misleading or outright false claims designed to instill doubt in the public’s mind about the safety of shale development. It is not a discussion of risk or even risk management, much less an attempt to have a reasonable dialogue about safety.

Simply put, opponents hope the public is too stupid to do its own research to discover just how divorced from reality their claims are.