The Appalachian Basin is once again showing the country and the world how natural gas will play a key role in the transition to a lower carbon economy after a coalition of major energy, petrochemicals, and steel companies announced they are planning to build a hydrogen and carbon capture hub in Ohio, Pennsylvania, and West Virginia.

The move by EQT Corp., Equinor ASA, GE Gas Power, Marathon Petroleum Corp., Mitsubishi Power Ltd., U.S. Steel Corp., and Shell Polymers aims to slash emissions across various industries, creating a model for what an integrated low-emission energy and production system could look like. This feat, unlike any other, will benefit millions across the Appalachian Basin by creating jobs, driving innovation, and developing these industries.

“Our region has an abundant source of low-cost, low emissions-intensive natural gas which can be converted to low-carbon fuels and used to reduce our country’s carbon footprint. At EQT, we see a significant opportunity to expand beyond our existing business by leveraging this advantage to develop low-carbon fuel production and CCUS opportunities.”

What is Carbon Capture?

Carbon capture and storage (CCS) or carbon capture, utilization, and storage (CCUS) refers to industries using technology to capture carbon dioxide (CO2) directly from their operations, such as steel smelting or power generation. Once the CO2 is captured, it is transported to be used in products (CCUS) such as concrete or stored deep underground, including in old oil and gas wells. 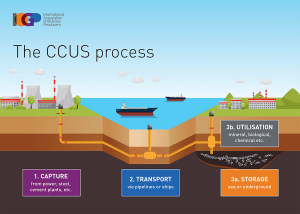 Carbon capture and storage technology has grown significantly over the past decade as organizations invested in lowering their carbon emissions, meeting climate pledges, and addressing climate change.

Since 2010, more than $7 billion in federal funds has been directed toward supporting companies to develop and implement carbon capture technology.

Now, what is hydrogen, and specifically blue hydrogen?

According to the Department of Energy, hydrogen is an energy carrier, and when consumed in a fuel cell, it only produces water. More importantly, hydrogen can be produced from multiple resources, including Appalachia’s abundant supply of natural gas.

Blue hydrogen production in the heart of Appalachia, where shale gas production has skyrocketed, is a prime opportunity for various industries, including energy and steel, to move the basin and country towards a lower carbon future.

Beyond the new investments in Appalachia, other regions are developing CCS facilities and hubs. As of February 1, 2022, the Great Plains Institute has identified 14 hubs across eight regions of the United States in their An Atlas of Carbon and Hydrogen Hubs for United States Decarbonization. These hubs located in critical industrial areas, the backbone of American energy production and manufacturing, are critical to reducing emissions and decarbonizing multiple industries. Recently, 14 companies, including ExxonMobil and Chevron, announced plans to build a shared CCS hub in the Houston area.

This low-carbon future starts now, with Ohio, Pennsylvania, and West Virginia in a tri-state alliance to decarbonize its industrial base, demonstrating the current potential of blue hydrogen.

“I am proud to be working with my colleagues on both sides of the aisle and across the state to collaborate on this incredible opportunity to showcase how West Virginia can continue to lead the country – and the world – in advancing energy technologies and bring good-paying jobs to the state. With our abundant energy sources and strong partnerships, our state is uniquely situated to compete for DOE funding to develop a hydrogen hub, as provided through my bipartisan Infrastructure Investment and Jobs Act.”

A hydrogen and CCS hub in Appalachia will create thousands of new jobs, propelling their economy, while protecting current critical jobs across the oil and gas industry and beyond. The hub will also generate significant revenue, expanding the economies of these states and countless communities, and boost the hydrogen economy of the Appalachian Basin.