INFOGRAPHIC: Hydraulic Fracturing and Water Use in California 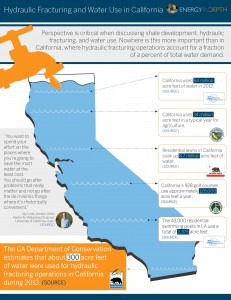 In their attempts to stall shale development, anti-fracking activists in California have been trying to convince people that hydraulic fracturing is rapidly depleting water supplies in the state – but as EID’s new infographic shows, fracking is not exactly the drain that opponents make it out to be.

According to the Pacific Institute, California consumed 64 million acre feet of water in 2012. What was shale development’s contribution to that total? 300 acre feet or .00047% of the state’s total water use. In fact, statewide water usage for hydraulic fracturing is nearly eight-times less than the water used in all 43,000 residential pools in Los Angeles.

As EID reported, shale development accounts for only about 0.3 percent of total U.S. freshwater consumption. Even in some of the most prolific oil and gas producing states – like Pennsylvania, Texas and Colorado – shale development uses only a fraction of a percent of each state’s total water use.  In California it’s an even smaller percentage: The California Department of Conservation reports that, when compared to other shale plays across the country, far less water is used as the geography of the Monterey Shale is more conducive to development, meaning less pressure and less water is required.

Further, as EID recently pointed out, the return on gallons of water used for fracking compared to other energy resources is pretty darn good in terms of jobs and the amount of energy that actually produced. Thanks to hydraulic fracturing, the natural gas produced from 1 million gallons of water can power 8,585 homes – well ahead of the 3.75 homes that energy from solar can power with the same amount of water. Likewise, shale development creates nearly five jobs per every five million gallons used while energy production from biomass produces less than one job. In short, hydraulic fracturing does a lot more with less.

Check out EID’s new infographic – “Hydraulic Fracturing and Water Use in California” – to learn more about water usage in California.