The International Energy Agency’s monthly Oil Market Report for January forecasts a dynamic and mutating crude market in 2023: while inventories are expected to grow in the first quarter, various international dynamics may cause the market to be extremely tight by the end of the year.

Additionally, the IEA expects China’s economy to have a slow-moving restart in the early part of the year. However, the next part of the year might tell a different story, especially given we’re already seeing oil price increases as a result of increased Chinese demand.

By the middle of the year, assuming the Chinese government sticks to its plan to reopen the economy, Chinese markets will be back in full force, creating a significantly stronger crude demand. As IEA Director Faith Birol explains:

“We may see China’s economy growing strongly, and if Chinese demand for oil is strong it would put upward pressure on prices…[the excess oil] cushion will disappear very quickly.”

On top of that, western sanctions are expected to have a greater effect on Russia’s ability to produce by the summer. Beginning next month, the European Union’s bans on Russian oil will include sanctions on certain refined oil products. As the Washington Post recently explained:

“Yes, but those apply to unrefined crude oil, which is subject to European bans and a $60-per-barrel price cap imposed on entities still buying from Russia. The new sanctions will affect seaborne Russian refined fuels. The country is also a major exporter of naphtha — which can be used to make gasoline and plastics — and fuel oil, which is often consumed in power generation and shipping. It also ships jet fuel, vacuum gasoil and other petroleum products. In all, Russia accounted for 9.3% of global oil product cargoes by volume in 2022, about 0.5 percentage points more than its share of the crude market, so these latest EU sanctions are just as significant.” (emphasis added) 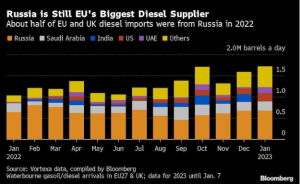 In short, demand will rise while supply shrinks.

IEA forecasts that global oil consumption will rise by 1.9 million barrels per day, leading to a record 101.7 mb/d in 2023 as the world’s booming economy and population looks to oil to fuel everyday needs. Half of this gain will be due to China’s reopening. On the flip side, growth in production will only increase by one million barrels per day, resulting in a supply deficit. Notably, the production balance will shift towards some of the top-ranked non-OPEC+ producers, particularly the United States. Canada, Brazil and Guyana are also expected to make significant contributions to the market.

Simply put, the shrink in spare supply and rising demand may add pressure on prices. For example, Goldman Sachs is already describing the second half of 2023 as a “bullish concoction,” and hedge fund manager Pierre Andurand predicted that prices might reach $140 a barrel.

Bottom Line: The global oil shortage expected in late 2023 is all the more reason for the United States to continue expanding domestic production, and for federal policymakers to create a regulatory and policy environment that encourages a strong energy sector.