IEA On Energy Transition: Natural Gas Is Part of the Solution

Fatih Birol, director of the International Energy Agency, recently presented the organization’s key priorities and special projects for 2021. Unsurprisingly, energy transition dominated the IEA’s agenda, especially as the agency steps into a more prominent role amid the highly anticipated United Nations Climate Change Conference, also known COP26 at the end of the year.

And two declarations definitely made a splash for the oil and gas industry:

The director of the leading energy organization worldwide unapologetically acknowledged that oil and natural gas companies would play a key role in contributing to tangible solutions to address the challenge of climate change, stating:

“I believe there is a high probability that many oil and gas companies are part of the clean energy transition.”

As Birol explained, these companies have both the money and the technology to help accelerate the development of transition technologies and make them commercially viable:

“Most of those companies have deep pockets, huge experience in the energy technologies they can utilize to mature the technologies that are not ready for the market. It can be hydrogen; it can be offshore wind; it can be carbon capture and storage.”

Birol has been a sound advocate of natural gas’ emissions reduction potential and the powerhouse that U.S. shale gas has become since 2005.

Birol also recognized that oil and natural gas demand would likely rebound during 2021, pointing out China as not only the best example of economic recovery post-pandemic, but also as the main driver of energy demand.

How does this announcement impact the United States? Well, as EID has explained over the last year, U.S. natural gas, and LNG in particular, has great potential in a growing Chinese market. Given the Chinese urgency to reduce greenhouse gas emissions rapidly, natural gas has swiftly become the energy source en vogue jour. And U.S. LNG can facilitate the ongoing coal-to-gas conversion that China needs to drastically reduces its CO2 emissions.

According to data from the market data firm Kpler, reported by Natural Gas Intelligence, China has imported a combined 49 U.S. cargoes, totaling 168 billion cubic feet  of natural gas, since trade resumed at the beginning of 2020. In fact, Chinese demand for U.S. LNG picked up quickly since October 2020. 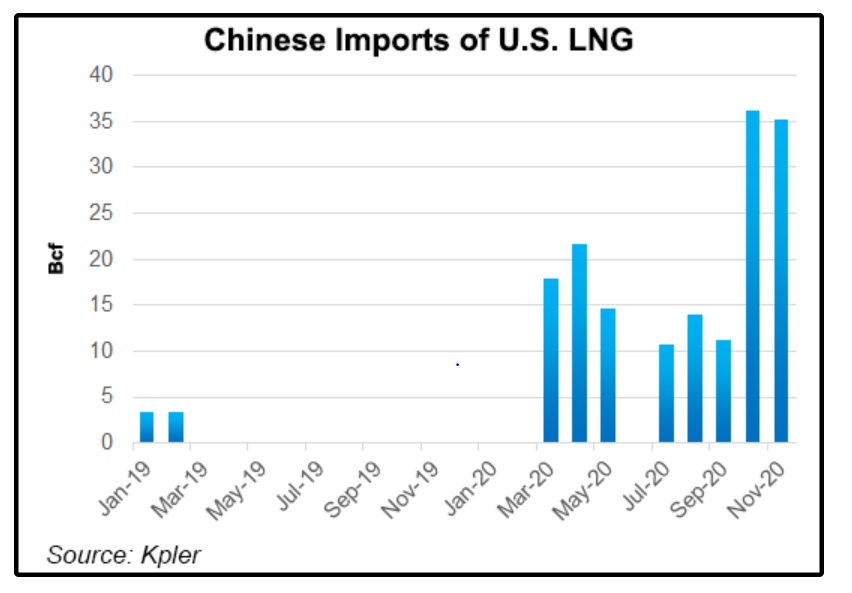 Let’s remember that China and the United States resumed bilateral trade at the beginning of 2020, with China committing to buy $200 billion in American goods over the next two years. One fourth of that ($52.4 billion) represents LNG, crude oil and refined products. While China’s 2020 fossil fuel imports totaled 26 percent of the original annual target, IEA’s Chinese demand forecast can only mean great news for U.S. LNG in the medium term.