EIA Outlook: Canadian Natural Gas Will Be Most Economical Energy Source by 2050

The U.S. Energy Information Administration’s 2021 International Energy Outlook describes a promising future for the role of natural gas throughout the next 30 years or so, particularly for Canada.

This year’s report looks at what long-term consumption, production and electricity trends will emerge between now and 2050. And for Canada, the energy future will definitely include natural gas in the overall energy picture.

Share of Natural Gas Set Will Nearly Double by 2050

Different regions must consider a number of variables to produce sufficient amounts of energy during peak demand seasons. Given Canada’s geography, investing in certain types of renewable energy like solar is often uneconomical, given the lack of sunlight throughout the year. Because of this EIA projects that wind power will be the dominate renewable energy source for the country, and that natural gas will also play a major role in Canada’s energy landscape in just 30 years’ time:

“By 2050, intermittent generation—almost exclusively from wind resources—accounts for about 25% of Canada’s electricity generation mix. To ensure grid reliability with the growth in wind generation, natural gas-fired generating capacity will likely become the more economic choice.” 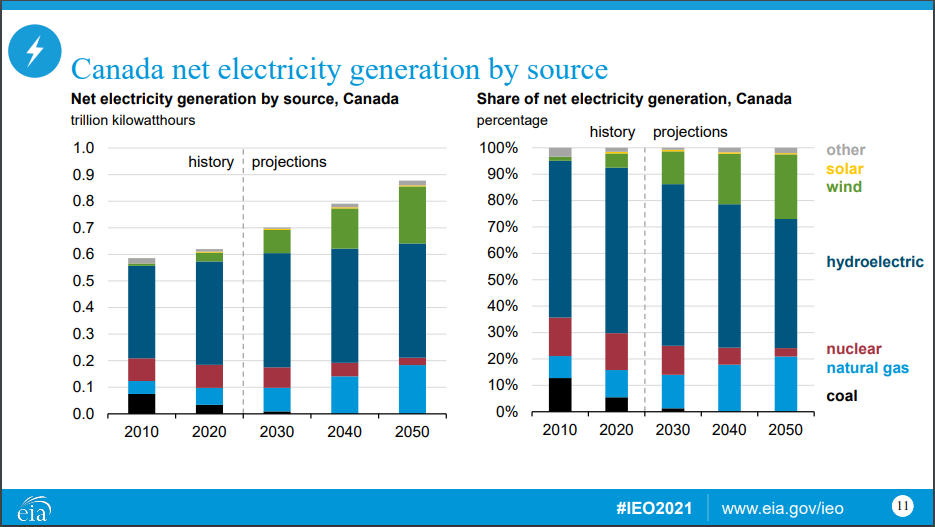 Wind power is the other big mover the EIA predicts will more than double in the next 30 years. According to the agency’s projections, wind power will produce slightly above .2 trillion kilowatt-hours by 2050—nearly a 30 percent increase in the overall share of net electricity produced in Canada.

Potential for Natural Gas in Québec

These projections come as the province of Québec considers a permanent ban on oil and natural gas development – despite having an estimated 20 trillion cubic feet of natural gas, or about the equivalent of Texas’ Barnett Shale. Studies have shown that developing this resource would reduce domestic carbon emissions that will be displaced to countries with higher-emitting production.

And EIA’s data shows the benefit for future renewable generation to having a stable supply of domestically produced natural gas.

There’s no doubt that renewables will play a large part of future energy markets’ portfolios. However, not all types of energies work effeciently, considering the geographic limitations of different countries like Canada. That’s why, for countries like Canada, it’s clear that energy sources like natural gas provide the solution for ensuring energy security throughout peak demand seasons, when other renewable sources are limited.