Ahead of the international climate conference that will kick off in Paris at the end of this month, the Paris-based International Energy Agency (IEA) released its 2015 World Energy Outlook (WEO), which forecasts that natural gas will continue to play a primary role in the reduction of greenhouse gas emissions.  From the report:

“There are good reasons to be upbeat about the future for natural gas: its relative abundance; its environmental advantages compared with other fossil fuels; the flexibility and adaptability that make it a valuable component of a gradually decarbonizing electricity and energy system.” (emphasis added)

“Where it replaces more carbon-intensive fuels or backs up the integration of renewables, natural gas is a good fit for a gradually decarbonizing energy system: a consumption increase of almost 50% makes it the fastest-growing of the fossil fuels… world natural gas production is not derailed in the longer term, and reaches nearly 5.2 trillion cubic metres (tcm) by 2040.” (emphasis added).

IEA predicts worldwide energy use will grow 33 percent by 2040 and that shale gas will be critical in meeting the overall natural gas demand. Based on the report’s most likely scenario, shale gas production will nearly triple by 2040.

“Unconventional natural gas is set to become an increasingly important part of global gas supply, accounting for more than 60% of the increase in total gas production over the period to 2040. Projected production of shale gas, coalbed methane and tight gas, along with smaller volumes of gas converted from coal, rises from around 630bcm in 2013 to almost 1700bcm in 2040.”

The IEA projects the spike will be spearheaded by increased energy demands in developing Asian countries. India – which EIA projects will account for around one quarter of global energy demand by 2040 – could emerge as a major natural gas market, as an additional 600 million people are expected to get electricity in India in the next 25 years.

From a presentation accompanying the report: 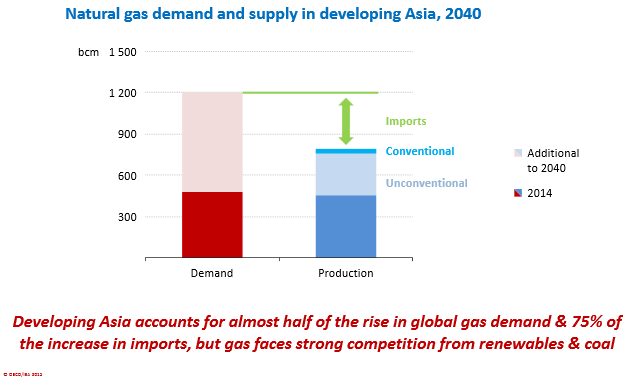 EIA Executive Director Fatih Birol indicated in a Q&A following the press conference unveiling the 2015 WEO that the “golden age of natural gas” is primarily a North American phenomenon:

It would seem wise for Asia to follow the U.S.’s lead, considering no other country has achieved a bigger drop in CO2 emissions since 2000. And U.S. carbon emissions should continue to plummet, considering the IEA projects natural gas to become the country’s largest source of electricity generation by the mid-2020s.

IEA also acknowledges that unforeseen technological advances – such as advancements horizontal drilling and hydraulic fracturing technology – were what made the shale gas revolution possible:

“The shale gas revolution in the United States is a reminder that energy systems retain the potential for sharp and rapid change, once a technology reaches a tipping point of proven effectiveness and commerciality. In 2005, shale gas production accounted for 6% of US total gas production and 1% of global gas production. By 2014, shale gas production had grown to a staggering 52% of US output and 11% of world output. Even though gas markets outside North America have not yet felt the direct impact of this revolution (pending the start of US LNG exports), the indirect results – in a reorientation of market expectations, changed gas and coal  trade flows, and the economic boost to parts of the US economy – have already been  momentous inside and outside North America.”

Predictably, considering the IEA is based in France – a country that has banned fracking – it’s 2015 WEO offers rosy projections for renewables going forward, predicting they will comprise five percent more of the total energy mix by 2040. But in a world in which 17 percent of the population still doesn’t have electricity and 38 percent people still use biomass to cook, the demand for fossil fuels – and especially natural gas – will remain, according to Birol:

“…There is a transition in the energy system toward cleaner fuels and the global energy system is becoming more and more efficient. But we will also need oil, gas and other fossil fuels for  some time to come…”