According to the International Energy Agency’s World Energy Outlook 2022, the United States is poised to soon become the largest exporter of natural gas in the world. This is excellent news not only for the U.S. economy, but for global security and emission reduction goals worldwide.

Following its first large-scale shipment from the lower-48 states in 2016, the United States quickly took on a leadership position in the global LNG export market. By late 2021, the United States became the world’s largest LNG exporter for the first time, surpassing other top global producers due to a combination of classic energy geopolitics – Russia’s invasion of Ukraine and increased American availability.

Russian gas delivered via pipeline to Europe has declined dramatically following Russia’s invasion of Ukraine, and European leaders don’t expect exports to return to pre-invasion levels. On top of this, burdened by western sanctions, Russia – also a top LNG exporter – is unable to construct additional LNG export terminals to supply other nations. These limiting factors led to the IEA’s forecast that demand for Russian gas will be cut in half by 2030.

Let’s take a deeper dive into how this situation positions the United States as an energy stabilizer for the globe in both the short and long-term.

Fast-tracking LNG to Europe in a Time of War

In the aftermath of Russia’s invasion of Ukraine, Europe was quickly forced to turn away from Russia to meet its natural gas needs. To do this, it began rapidly importing LNG. In fact, in the first eight months of 2022, net LNG imports into Europe rose by two‐thirds (by 45 billion cubic meters [bcm]) compared with the same period a year earlier. As the graph below displays, Europe’s natural gas consumption will continue to be heavily reliant on LNG imports throughout the next decade. 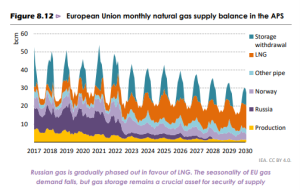 As Europe’s largest LNG supplier, the increase in imports came primarily from the United States. In 2022, U.S. LNG exports rose by 12 percent and at least 71 percent of their exports went to the European Union and the United Kingdom. While Europe still faces high prices and a supply crunch, it is hard to imagine what the state of Europe’s energy crisis would be without the United States’ ability to quickly divert natural gas supplies.

Although Europe will continue to heavily rely on U.S. LNG imports through the next decade, this demand will gradually decline thereafter due to Europe’s intention to electrify its power grids and pursue more alternative energy sources. As Europe moves through its energy transition with American LNG supporting their low carbon goals, more natural gas from the United States will be available for other nations also looking to meet their decarbonization goals and energy needs.

As prices for LNG decrease by end of the decade, emerging Asian markets are expected to dramatically increase their natural gas use as a result of coal-to-gas switching. Increased natural gas consumption in Asia will help its economies continue to develop, lifting millions out of poverty, while decreasing its environmental footprint.

“A growing population and robust economic development provide a strong foundation for growth: gas demand in the APS in these emerging markets in Asia rises by 20 percent to 120 bcm in 2030. Around 70 percent of this growth is met by imported LNG.”

Notably, some countries are already positioning themselves to increase import capacity by the end of the century. For example, China is not holding off on developing LNG infrastructure. Around 65 bcm per year of LNG regasification capacity is under construction in China, adding to the existing capacity of 100 bcm per year.

Bottom-Line: While the IEA predicts that American domestic natural gas demand will decline in the coming decades, this should not result in policies that limit domestic production. The United States has a proven track record of supplying other nations with natural gas while promoting global energy security. Furthermore, due to the expansion of natural gas, the United States has realized significant reductions in its C02, and has the opportunity to help emerging economies in Asia do the same by continuing to increase its export capacity of this essential energy source.