IEA: US Will Be ‘Undisputed Leader’ of Global Oil and Natural Gas Markets — Thanks to Fracking

That is essentially the conclusion of the International Energy Agency’s 2017 World Energy Outlook, which projects America will become a net exporter natural gas and oil by the end of the next decade.

Energy independence was once unthinkable, but is now imminent — thanks to fracking, which has boosted oil and gas production in the U.S. to levels that are shaking up how the world consumes energy.

Despite the U.S. shale industry’s well documented recent successes, the IEA echoed a recent Bloomberg documentary that trumpeted the shale revolution is only in the “second or third inning,” projecting unprecedented U.S. oil and gas production growth will continue.

The IEA delved deeper into the US shale phenomenon in its report:

“A remarkable ability to unlock new resources cost-effectively pushes combined United States oil and gas output to a level 50% higher than any other country has ever managed; already a net exporter of gas, the US becomes a net exporter of oil in the late 2020s.”

As the following graphic from the IEA report illustrates, U.S. oil and natural gas production is projected to double from levels seen in 2005. 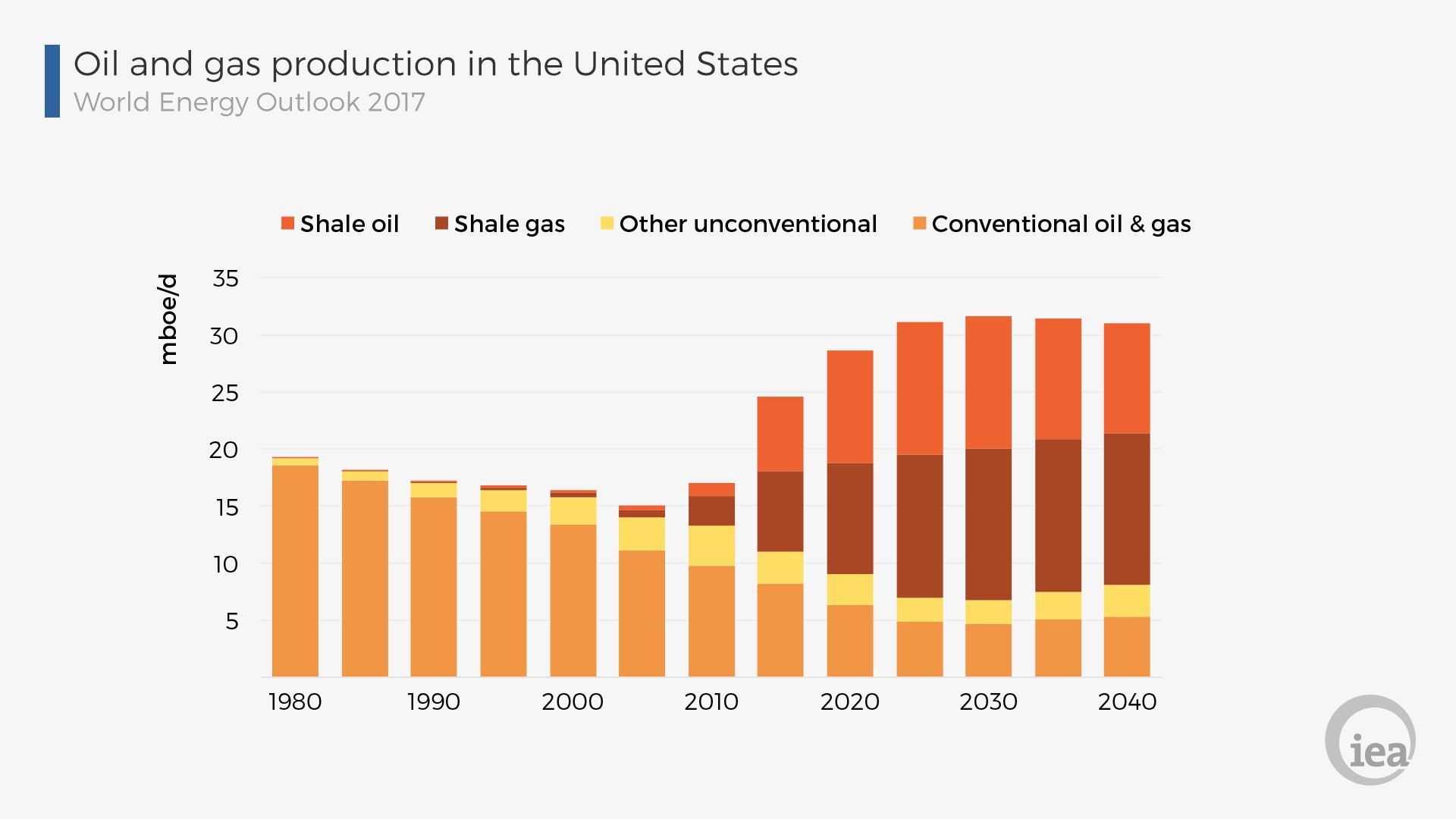 Back in 2005, the theories of “peak oil” and “peak gas” were widely accepted. Flash forward more than a decade later, and America’s energy fortunes have been reversed. As the IEA reports:

“In our projections, the 8 mb/d rise in US tight oil output from 2010 to 2025 would match the highest sustained period of oil output growth by a single country in the history of oil markets. A 630 bcm increase in US shale gas production over the 15 years from 2008 would comfortably exceed the previous record for gas.”

IEA is also clear that the era of oil is not yet over, as it projects demand will continue to increase – albeit at a slower pace – through 2040, as emerging economies drive new demand. The United States will meet the majority of that new demand in the near term.

“With the United States accounting for 80% of the increase in global oil supply to 2025 and maintaining near-term downward pressure on prices, the world’s consumers are not yet ready to say goodbye to the era of oil.”

“The agency raised estimates for the amount of shale oil that can be technically recovered by about 30 percent to 105 billion barrels. Forecasts for shale-oil output in 2025 were bolstered by 34 percent to 9 million barrels a day.”

With U.S. oil and gas output set to surge past 30 million barrels equivalent per day in the coming years, one has to wonder: where is all that new energy going? As it turns out, the U.S. is becoming more and more energy efficient with each passing year, so massive volumes of oil and gas will be available for export to countries in dire need of affordable energy.

As we’ve discussed before, the US is already on track to become the world’s leading liquefied natural gas exporter. In the 2017 outlook, the IEA predicts (as it has before) the U.S. will assume the leading role in the middle of the next decade – and also forecasts the U.S. becoming a net exporter of oil, too:

“By the mid-2020s, the United States [will] become the world’s largest liquefied natural gas (LNG) exporter and a few years later a net exporter of oil – still a major importer of heavier crudes that suit the configuration of its refineries, but a larger exporter of light crude and refined products.”

“A new gas order is emerging, with US LNG helping to accelerate a shift towards a more flexible, liquid, global market… LNG accounts for almost 90% of the projected growth in long-distance gas trade to 2040: with few exceptions, most notably the route that opens up between Russia and China, major new pipelines struggle in a world that prizes the optionality of LNG.”

A critical component of the LNG export boom is the development of liquefaction and export terminals across the lower 48 states. Cheniere Energy’s Sabine Pass LNG terminal is already in operation, and Dominion’s Cove Point LNG terminal in Maryland is set to begin processing exports by the end of the year. Several other projects on the Gulf Coast are under construction, but many are still awaiting regulatory approval from federal agencies, according to the US Energy Information Administration. 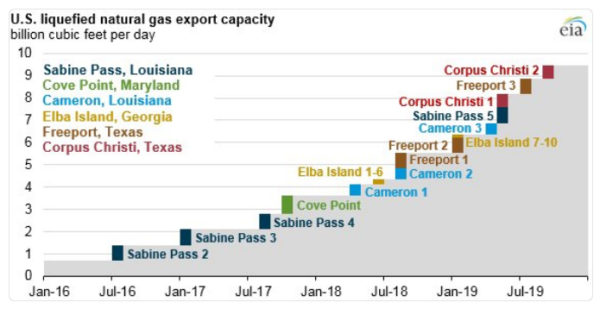 The IEA projects global natural gas use will increase 45 percent by 2040, with India and China accounting for 30 percent of the increase. When it comes to natural gas, the world has never needed more of it. China and India will see their demand for natural gas more than double by 2040, and similarly strong growth will occur in the rest of Asia, Africa and the Middle East.

When it comes to greenhouse gas emissions and addressing climate change, the IEA reports that the U.S. is leading the pack when it comes to reducing emissions. And as the U.S. Energy Information Administration and several other experts have confirmed, roughly two-thirds of the U.S.’s 12 percent reduction in energy-related carbon emissions since 2005 can be attributed to increased natural gas use for electricity generation.

So, considering the U.S. is likely to be exporting record amounts of shale gas to the rest of the world, it will also be exporting greenhouse gas reductions to the rest of the world as well. Under its 2017 projections, “natural gas becomes the largest single fuel in the global mix” of power generation in IEA’s main scenario, which assumes sustainable development policies are the norm across most countries. The IEA forecasts:

“Consumption of natural gas rises by nearly 20% to 2030 in the Sustainable Development Scenario and remains broadly at this level to 2040. The contribution of gas varies widely across regions, between sectors and over time in this scenario. In energy systems heavily reliant on coal (as in China and India), where renewable alternatives are less readily available (notably in some industrial sectors), or where seasonal flexibility is required to integrate high shares of variable renewables, gas plays an important role.”

Importantly, IEA reported last month that natural gas maintains its climate benefits over other traditional fuels even when taking methane leakage into account, debunking claims by environmentalists that such leaks wipe out the fuel’s climate benefits,

The IEA’s 2017 World Energy Outlook is truly a landmark forecast. One day in the distant future, we will likely measure the progress of our country – and the world – against the metrics it has set forth. Undoubtedly, America’s shale revolution has a central role to play in the coming years. The IEA has high expectations for economic growth, improved access to energy and improved environmental conditions, and these hopes all hinge on American shale producers, which the IEA noted have emerged from the recent OPEC price war stronger than anyone could have ever imagined. As Bloomberg Markets reported,

“The U.S. industry ‘has emerged from its trial-by-fire as a leaner and hungrier version of its former self, remarkably resilient and reacting to any sign of higher prices caused by OPEC’s return to active market management.’”