IHS Markit: Natural Gas Could Be A “Second Pillar Of Decarbonization”

Far from being left behind by the green energy transition, natural gas will continue to be an important energy source around the world, writes IHS Markit in a new report.

According to IHS Markit, natural gas “can be a zero-carbon renewable option as well as a fossil fuel” helping the world realize emissions benefits in the short term and reliability benefits far into the future. The report states:

“It is important to emphasize that gas can be a zero-carbon renewable option as well as a fossil fuel.”

Natural gas already meets nearly one-quarter of global energy needs and is used to generate one-quarter of the world’s electricity. Further expansion of the use of natural gas will continue to reduce emissions associated with power generation while providing a reliable backup energy source for intermittent renewables such as wind and solar. 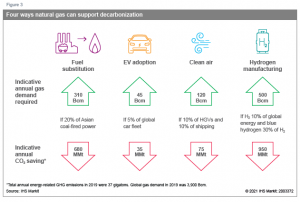 Over the past decade, the United States has been able to dramatically reduce greenhouse gas (GHG) emissions by switching from coal to natural gas as an electricity generation fuel. Much of the world, particularly Asia and Africa, continues to rely on higher-emitting fuels to generate electricity.

Transitioning to natural gas is a near-term solution to reduce emissions without sacrificing reliability, as the researchers explain:

“Natural gas can not only meet growing demand for clean, affordable energy but can also replace coal and oil and their associated higher emissions. In the short and midterm, natural gas remains one of the most impactful, practical, and affordable means to reduce emissions quickly and at scale this decade, especially in the United States and emerging economies.” (emphasis added)

Replacing older and less efficient power plants with high-efficiency gas generators would reduce emissions by 50 percent by unit of electricity, the report found. In Asia alone, this would generate 0.9–1.2 gigatons (Gt) of annual CO2 reductions and would improve local air quality.

Investment in a Flexible Future

Another benefit of natural gas is that the infrastructure associated with it, including liquification plants, pipelines, and gas-fired generators, can often be converted to use renewable fuels such as hydrogen or biogas. This makes it easier to finance the construction of these projects because investors are less concerned about the potential of stranded assets.

“Repurposing infrastructure has technical challenges but the costs, while significant, are still lower than building entirely new facilities. And it provides flexibility to policymakers and lenders who could structure authorizations and loans such that any new-build infrastructure be conversion-ready and have defined performance standards with limits on the life that the asset can operate before being converted.”

And Michael Stoppard, chief strategist of global gas for IHS Markit agreed, saying that natural gas’s versatility is an asset:

“The versatility of natural gas infrastructure presents an opportunity to seize the low-hanging fruit of emissions reduction in the near-term while also making a down payment for deeper decarbonization. Switching to natural gas can support vital early action by replacing coal and oil and their associated higher emissions while also acting as a pre-build of energy carriers for a low-carbon future.” (emphasis added)

This is supported by the report’s finding that natural gas’s importance in the world’s energy mix will continue through the decarbonization process, as declining gas use in certain sectors is offset by increased use in transportation, hydrogen manufacturing, and heavy manufacturing. Even after the energy transition, natural gas will be needed for heating, industrial processes, and other sectors that are not easily electrified. This means that natural gas production will likely need to increase even as the world works to reduce emissions.

All in all, the study predicts that “natural gas will serve as a key bridge fuel for 10–15 years at a minimum.”

As the push for decarbonization grows, investors have become increasingly worried about the possibility of stranded energy assets. The latest research from IHS Markit shows that these worries may be unfounded. Building a sustainable, affordable, and reliable energy future will require the use of a range of fuels, and natural gas is set to remain a key part of helping to keep the lights on while reducing emissions.