The Biden administration’s illegal ban on new oil and gas leasing on federal lands is a major obstacle to creating new high-paying jobs, according to a new report from the National Ocean Industries Association (NOIA) and Energy and Industrial Advisory Partners (EIAP).

The report catalogs the significant economic benefits of the exploration, development, and production of offshore oil and natural gas. Given the 30-year lifespan of each offshore oil and natural gas project, the offshore sector, from pre-leasing to well completion, serves as a key driver in jobs, spending and continued revenue streams for states who rely on the generated income.

Critically, the report categorizes the benefits of “pre-leasing” activities, including engineering, geological and seismic work. These represent jobs and revenue that are directly harmed by the Biden administration’s illegal leasing ban, in addition to the myriad indirect impacts such as economic uncertainty.

The study comes as the Biden administration has yet to lift its illegal ban on oil and gas leasing for federal lands and waters. In June, a federal judge ordered the Interior Department to address pause of federal lease sales after weeks of delay. The impact of the leasing ban is already being felt as it has removed a critical revenue stream for both Federal and state governments which gain necessary funds from leasing sales. In response to the report’s findings, NOIA President Erik Milito said:

“Government policy should continue to encourage investment in the U.S. Gulf of Mexico energy sector to secure the tremendous energy, climate, and national security benefits for American citizens, as well as help avert potential inflationary risks associated with high energy costs. As long as Americans depend upon oil and gas for modern life, it must come from somewhere and it is clearly better to get oil and gas here at home than from a foreign state with weak environmental safeguards.”

High-paying jobs in the Gulf

The report notes the long lifecycle of offshore oil and natural gas projects, meaning two or three generations of workers can benefit from a single project. The benefits extend to both direct and indirect jobs as a result of these projects:

These jobs are varied in skills, with the report finding the direct jobs created by an offshore oil and gas project include over 200 different titles including petroleum engineers, general and operations managers, supervisors, truck drivers, welders, and cutters, just to name a few. 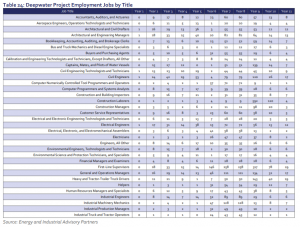 The variety of jobs generated by the offshore industry are also more lucrative and higher quality than the rest of the country. The analysis finds wages are nearly 30 percent higher than the national average:

“Based on this analysis, in addition to the large number of diverse jobs due to offshore project development, the quality of employment provided directly by the industry is also well above the national average with an average annual wage of nearly $69,650, around 29 percent higher than the national average of slightly over $54,000.”

Given the long lifecycle of these projects, the average income paid across the 30-year cycle can amount to nearly $3 billion, with around $100 million being paid annually. 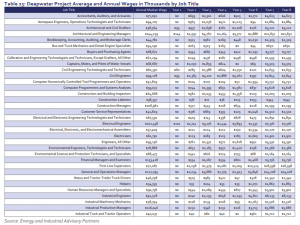 The federal leasing ban is not only putting individual jobs and revenues on the line, but also the funding for key conservation project through the Land and Water Conservation Fund, which supports the renovation of urban and national parks. The continued pause on federal leasing on federal waters is clearly risking the economic lifeline of the Gulf of Mexico and other regions across the country.