Huddled in the entryway of the Bilandic building of downtown Chicago, anti-fracking activists avoided the rain in an attempt to host a press conference for which not one member of the press attended. They practiced their chants and distributed Hershey kisses among themselves, which they planned to pass out to the Joint Committee on Administrative Rules (JCAR) if it voted to prohibit or delay the rules governing fracking in Illinois. 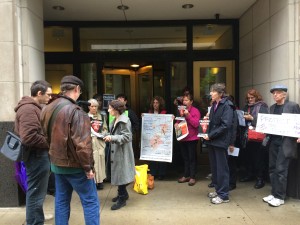 JCAR ultimately decided to delay a determination on the Illinois Department of Natural Resources’ (IDNR) second draft of rules until November 6.

Co-Chairman Sen. Don Harmon announced the decision at the opening of the meeting on Tuesday, resulting in an inappropriate outbreak of applause by the anti-fracking activists in attendance, which was in turn met with exasperated looks by several committee members.

The committee took time during the meeting to hear testimony from IDNR Director Marc Miller. Rep. Louis Lang, Sen. Dale Righter and Sen. Harmon went on to pose several hypothetical questions to Director Miller in an attempt to determine what might happen if rules aren’t put in place to support the law.

The back and forth between committee members and the INDR director was a civilized and professional discussion with a clear intention of working towards a solution and a compromise. It was a stark contrast to the behavior of the anti-fracking activists, which did not go unnoticed by the committee.

Rep. Lang used part of his time on the floor to sternly reprimand the activists. He openly acknowledged his opposition to hydraulic fracturing, but also made it clear that he supported its regulation.

He went on to say that he took “great offense to the emails from folks that think they will stop fracking by being angry.” Reading a portion of one of the emails he received, which accused JCAR of colluding with the industry to “gut the rules” behind closed doors, his resentment was palpable.

He concluded with a warning that he would not welcome additional letters of the sort and would not meet again with those who sent them.

At the conclusion of the meeting, the activists exited solemnly. Rep. Lang’s reprimand was clearly received – for about five minutes.

Following the meeting, posts on Frack Free Illinois’ Facebook page characterized the meeting as “amazing” and encouraged activists to “Keep up the calls, visits, emails, protests of JCAR members – do anything and everything you can to contact them.” Looks like they still haven’t learned their lesson.