It won’t be possible to reach global climate goals without utilizing natural gas as a part of the global energy strategy, according to academic researcher Marianne Kah, a board member of the Center for Global Energy Policy at Columbia University’s School of International and Public Affairs.

During a webinar last week hosted by the U.S.-Qatar Business Council, Kah said:

“It concerns me that some consuming countries’ governments are adverse to fossil fuels being any part of the net-zero solution and I think it’d be even more achievable if you include these in the solution.”

Kah isn’t alone. Key industry and government leaders around the world also see natural gas as a central component of a more sustainable energy transition, as opposed to immediately cutting the fuel out of the picture.

Need for a Sustainable Recovery

Due to their COVID-19 pandemic, there’s no question that the energy landscape in March 2020 is drastically different from the world we live in today. Now more than ever, both developed and developing economies need sustainable solutions for growing energy demands.

That includes fuels like natural gas, which has a track record of delivering affordable and low carbon energy across the United States. Data from the Environmental Protection Agency shows that greenhouse gas emissions have steadily fallen since 2005 even as oil and natural gas production has increased. 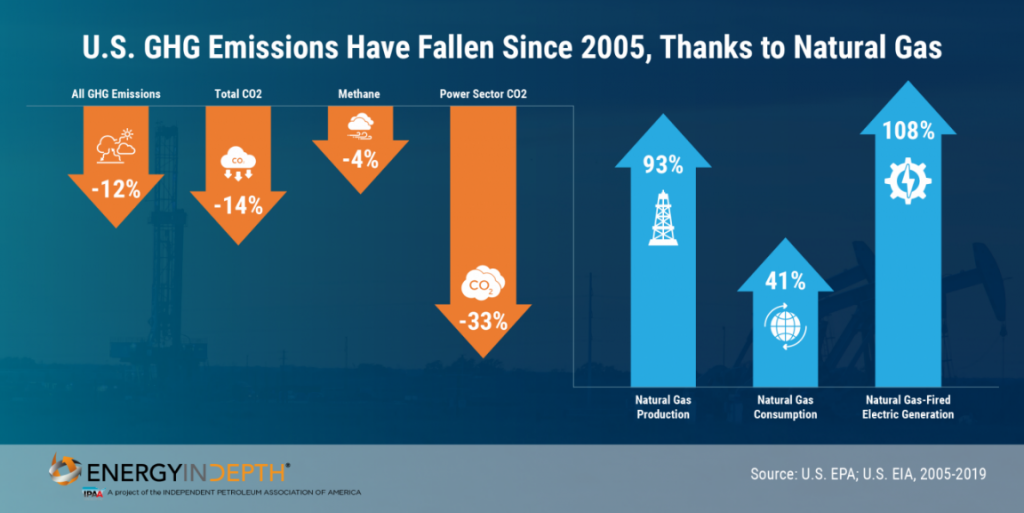 In fact, since the pandemic’s outset, demand for natural gas has remained seemingly unaffected. And although consumption of natural gas and LNG dropped slightly in the U.S. due to the pandemic, the International Energy Agency expects demand to grow 1.5 percent annually, with LNG leading the way.

Since natural gas continues to be one of most affordable options for energy available on the market, the  pandemic caused prices for the fuel to soar, with many U.S. producers reaching output capacity. Kah noted that prices are not likely to let up with producers being unable to keep up with demand:

The energy landscape changed dramatically due to COVID-19, and as a result, consumers around the globe turned to natural gas as a more reliable, cost efficient option on the market. This transition should serve as a stepping stone to meet the sustainability and climate goals of both large, carbon-emitting economies and smaller developing economies that remain dependent on carbon intense energy, like coal. Natural gas makes a sustainable recovery a reality.

LNG is one of the reasons that demand for natural gas continues to grow and recent infrastructure projects across all geographies have allowed LNG to truly become a global commodity. That’s why countries like Qatar, which accounts for a fifth of global LNG supply, are partnering with the U.S. to transform the future of sustainable energy with it.

Due to the sheer volume of LNG that Qatar produces and the infrastructure already in place, Qatar offers the lowest cost LNG on the market currently. By expanding its footprint and investing in LNG export projects in the United States, joint-ventures like Golden Pass create economic opportunities for North America to become more competitive on the global market, create jobs, boost energy security, and bring down carbon emissions.

Dominic Genetti, President of ExxonMobil Qatar Limited, spoke to the economic growth that its Golden Pass LNG project has brought to Texas and Louisiana:

“We’re very proud of this investment we are making with the State of Qatar and Qatar Petroleum at Golden Pass. This provides us multiple supply points which helps to optimize the transportation of LNG around the world. It’s a very large investment; it’s a $10 billion dollar investment. Construction has already started, we’re about 1/3 the way through production and it’s on schedule to start up in 2024. Since we’re talking about the U.S.-Qatar Business Council, [Golden Pass] provides a huge boom to the economy of south Texas and west Louisiana—currently there’s over 4,000 people on the site.”

Elsewhere around the world, both India and China are increasingly relying on natural gas as a cleaner-burning, reliable fuel. In fact, in 2019, almost 70 percent of the total global LNG exports were shipped to Asia.

LNG isn’t the only beneficial, alternative sustainable fuel that derives from natural gas either. The fuels can also be used to produce hydrogen.

Given its similar chemical structure and properties, natural gas in many ways paved the way for the development and commercialization of hydrogen energy. Today, roughly 95 percent of all hydrogen energy is produced from steam reforming of natural gas. This hydrogen can then be used to power fuel cell electric vehicles (FCEVs) which many countries in Europe and Asia have now used commercially for years. Most beneficially, when hydrogen is consumed in a fuel cell, it only emits water. Genetti explained that natural gas and LNG are the backbone for the future development of the global hydrogen trade:

“Methane, natural gas, or LNG—it is the first step to a hydrogen economy. Natural gas is one-part carbon four-parts hydrogen—that’s what makes it so attractive relative to other hydrocarbons. It’s not too big of a leap to chop off the carbon, and sequester the carbon and you’re left with hydrogen.”

The strategy for achieving climate goals can’t be fossil free, nor can it be done by a single continent. Fuels like natural gas, LNG, and hydrogen are all promising options that have broad support globally and it’s going to take every option on the table to reduce global carbon emissions—and that includes cleaner-burning energy sources like natural gas and its derivatives.