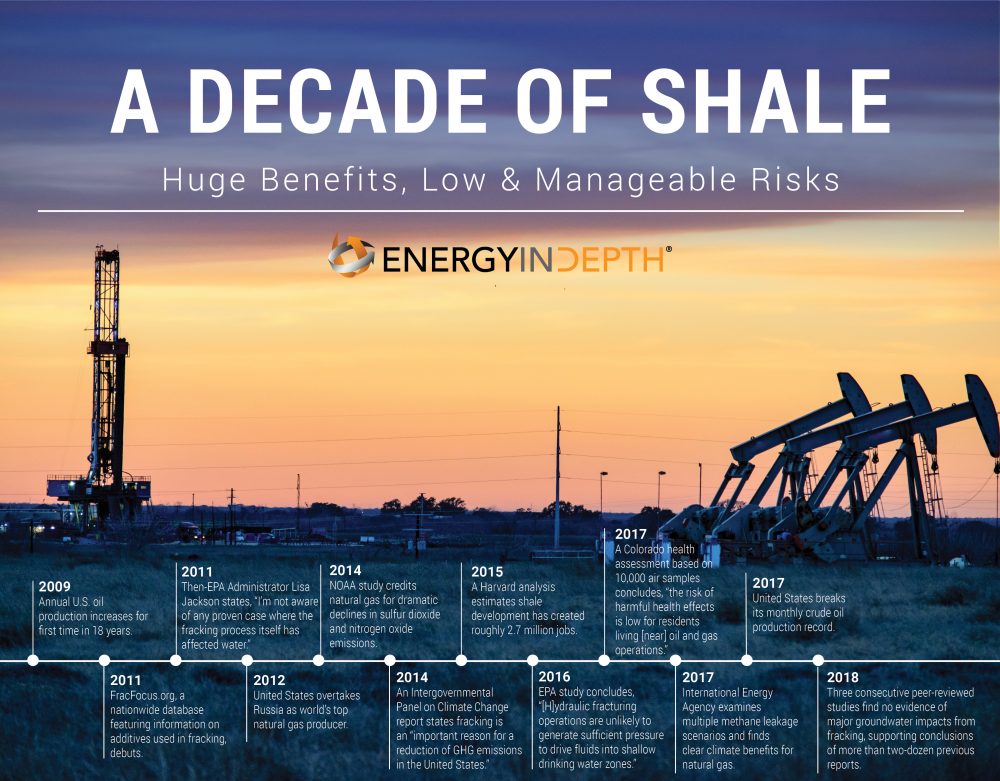 This year marks the 10-year anniversary of the shale revolution taking hold in the United States. And as EID’s new infographic, “A Decade of Shale: Huge Benefits, Manageable Risks,” shows, not only has the notion of “peak oil” been put to rest over the past 10 years — thanks largely to advances in hydraulic fracturing and horizontal drilling technology — it has also become clear that “Keep It In the Ground” movement claims that fracking poses an inherent threat to groundwater, public health and the climate are erroneous as well.

Fracking has transformed the United States’ position from that of energy scarcity to the role of being “the undisputed leader of oil and gas production worldwide,” according to International Energy Agency Executive Director Fatih Birol. And at the same time, reputable third-party research continues to demonstrate that fracking is being conducted safely.

Here is a look at 12 defining moments of the first decade of the shale revolution.

• 2009: With “tight oil” production from horizontal wells starting to take off, annual U.S. oil production increases for the first time in 18 years.

• 2011: FracFocus.org, a searchable, nationwide database, debuts. The website features information on the additives used in the fracturing process for oil and natural gas wells all across the country. Many states mandate that companies use FracFocus, and the federal government has similarly endorsed it as a useful tool for providing information to the public.

• 2011: Obama administration EPA Administrator Lisa Jackson states, “I’m not aware of any proven case where the fracking process itself has affected water,” refuting the go-to claim of the anti-fracking movement. Subsequent peer-reviewed research over the course of the next seven years further confirms Jackson’s statement.

• 2012: For the first time in 20 years, the United States overtakes Russia as the world’s top natural gas producer – a title the U.S. hasn’t relinquished since.

• 2014: A peer-reviewed National Oceanic and Atmospheric Administration (NOAA) study credits increased natural gas use for 44 and 40 percent reductions in sulfur dioxide and nitrogen oxide emissions in the U.S. since 2004. These “criteria pollutants” are responsible for millions of deaths worldwide, and have continued to decline dramatically in the U.S. as natural gas consumption has reached record levels.

• 2014: A United Nations Intergovernmental Panel on Climate Change (IPCC) assessment states that fracking is an “important reason for reduction of GHG emissions in the United States.” U.S. carbon emissions have declined 14 percent since 2005. The IPCC’s statement is all-the-more notable considering it has been called the “gold standard” to “getting a big-picture understanding of what’s happening to the climate,” according to Sierra Club Executive Director Michael Brune.

• 2016: A landmark 2016 U.S. Environmental Protection Agency study concluded that, “[H]ydraulic fracturing operations are unlikely to generate sufficient pressure to drive fluids into shallow drinking water zones.” The EPA reached this conclusion even after expanding the definition of fracking to include a wide range of other oilfield activities, demonstrating the safety of the entire development process.

• 2017: A Colorado Department of Public Health and Environment health assessment based on 10,000 air samples collected near areas of significant oil and natural gas development concludes, “the risk of harmful health effects is low for residents living [near] oil and gas operations.” It is one of no fewer than 17 reports based on actual air measurements that has concluded fracking is protective of public health.

• 2017: An International Energy Agency assessment examining multiple methane leakage scenarios concludes that natural gas maintains its climate benefits even at much higher leakage rates than currently observed and “regardless of timeframe considered.”

• 2017: The United States breaks its monthly crude oil production record in November by producing an average of just under 10.1 million barrels per day (p/d). That total has been surpassed six times already in 2018, as the U.S. is on pace to pump a record-setting 10.8 million barrels p/d.

• 2018: Three peer-reviewed Appalachian Basin studies are released in the span of five weeks finding no evidence of significant groundwater impacts from fracking. They are three of no fewer than two-dozen reports that have reached the same conclusion over the past 10 years.