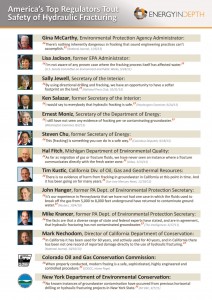 Shale development operates under stringent regulations — complying with various federal, state and local requirements in every region it is used. As the men and women all across the country who enforce these regulations know, the process can be and indeed is being done safely, all the while providing a secure supply of oil and natural gas.

As former Secretary of the Interior Ken Salazar recently stated, “I would say to everybody that hydraulic fracking is safe.”

Fracking is also providing a number of environmental benefits, enabling increased production of clean burning natural gas. Environmental Protection Agency (EPA) Administrator Gina McCarthy recently stated, “natural gas has been a game changer with our ability to really move forward with pollution reductions.” Sally Jewell, Secretary of the Interior and the nation’s top regulator for federal lands, also recently noted that “by using directional drilling and fracking, we have an opportunity to have a softer footprint on the land.”

Anti-fracking groups make a lot of noise – often diluting the information pool with fear tactics and misinformation. Fortunately, the professionals who actually have expertise in overseeing development have a voice too.