Colorado Injection Wells and Earthquakes: Get the Facts 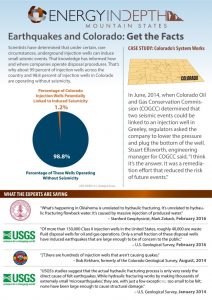 With the Colorado State Senate scheduled to consider legislation that “would hold oil and gas drillers liable for any earthquakes,” activists have been busy spreading misinformation in an effort to boost the proposal’s prospects.

The bill has even become a rallying point for activists behind a series of ballot initiatives to ban energy development in the state, with its sponsor Rep. Joe Salazar, D-Thornton,  actively seeking their support.

Colorado business leaders have been pushing back against the misleading claims supporting the bill as is Colorado Governor John Hickenlooper. When asked where he stands on the proposal, CBS Denver reports that Hickenlooper said:

“A bill like this when there’s not a real risk, it makes us appear like we’re anti-business,” he said.

Hickenlooper’s assessment is backed up by a recent EID report entitled “Injection Wells and Earthquakes: Quantifying the Risk,” which shows (using data from the U.S. Geological Society and peer reviewed studies) that in United States, and particularly in Colorado, such events are exceedingly rare. With 920 Class II injection wells and 350 disposal wells operating in the state, EID found that 98.8 percent of Class II injection wells and 96.86 percent of disposal wells in Colorado have been operating without seismicity.

Check out EID’s new infographic – Colorado Injection Wells and Earthquakes – to get the facts.