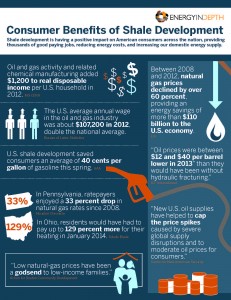 Shale development is reinvigorating our economy, powering our nation, and supporting American consumers from the well pad to the grocery store.

As EID has reported in the past, shale development is helping to provide good-paying jobs for individuals and families across the country – jobs that provide wages close to double the national average, according to the Bureau of Labor Statistics.  A recent report also finds that 18 of the top 25 counties with the highest growth in median household income between 2010 and 2013 are near shale rich regions, while unemployment dropped significantly in regions with oil and gas production.

In addition to providing good-paying jobs, shale development is also providing increased energy savings for consumers. As AAA recently noted, U.S. shale development helped save consumers an average of 40 cents per gallon of gasoline this past spring. Meanwhile, residents in Pennsylvania and Ohio are realizing tangible savings on their annual energy bills thanks to affordable, clean-burning natural gas, much of which is being produced from nearby shale plays.