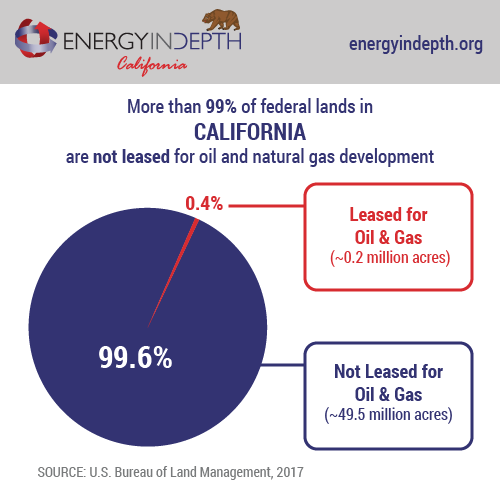 California remains one of the nation’s most significant oil and gas producing states but very little of that production happens on public lands.

In the past several months, a series of New York Times articles have suggested that the Trump Administration and the energy industry have created a “wild west” environment and are scheming to dramatically escalate oil and gas activity on federal lands in the western United States. EID recently published research debunking this narrative by showing that less than 10 percent of federal lands in the Mountain West are leased for oil and gas development and that there was more federal leasing and permitting during the Obama administration’s first term than there has been thus far in the Trump presidency.

Nevertheless, anti-industry activists are trying to peddle the same “wild west” narrative about California. For example, Clare Lakewood, a senior attorney at the Center for Biological Diversity (CBD), claims:

“This step toward opening our beautiful public lands to fracking and drilling is part of the Trump administration’s war on California. We desperately need to keep these dirty fossil fuels in the ground. But Trump is hell-bent on sacrificing our health, wildlife and climate to profit big polluters.”

But is this true? As with so much said by CBD regarding oil and gas development, it is not. EID ran the numbers and the fact is that less than one half of one percent of federal land in California is leased for oil and natural gas development.

So much for the one of the favorite narratives of anti-industry activists and enterprising journalists.