INFOGRAPHIC: Oil and Gas Production Soars across the Nation 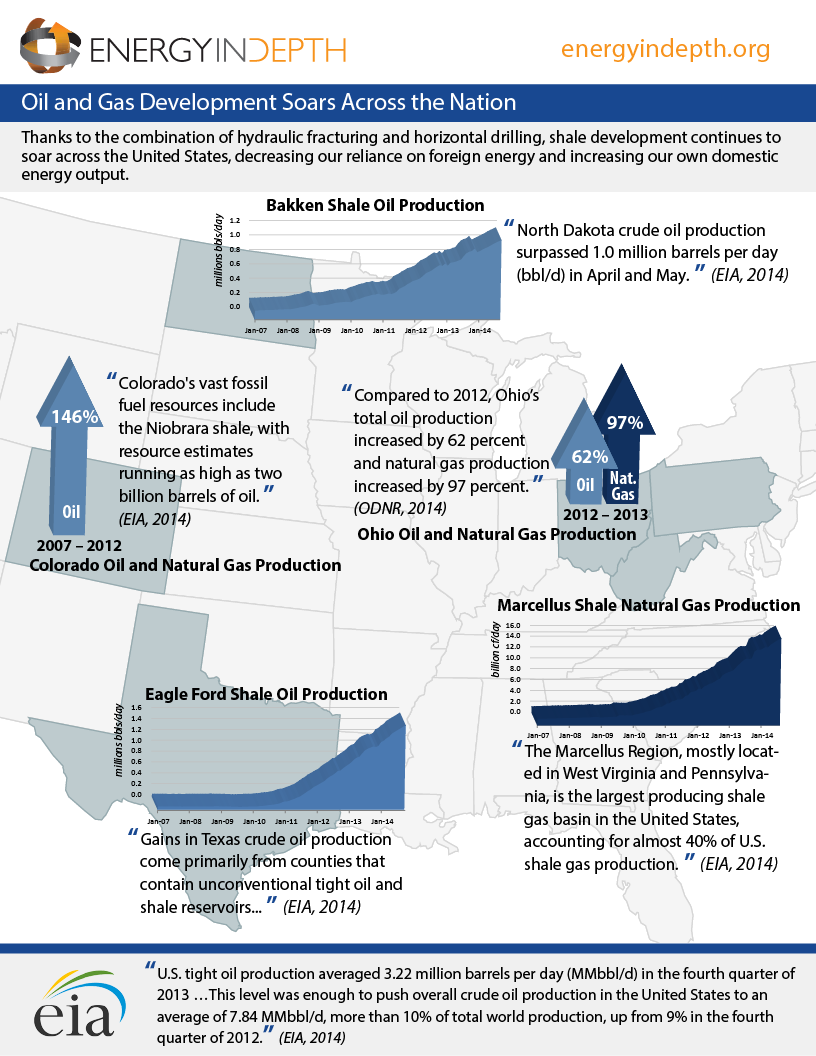 As the U.S. Energy Information Administration (EIA) recently explained, average American oil output now makes up over 10 percent of total world production. Not only does this development have significant implications from an energy security perspective, while potentially shielding the U.S. from global oil shocks of years past, it is also having a real impact on the American economy — all thanks to shale.

Take North Dakota, where development of the Bakken Shale has recharged the state and the nation’s oil output. According to the latest data available from EIA, “North Dakota crude oil production surpassed 1.0 million barrels per day (bbl/d) in April and May.”  As we all know, that state’s unemployment rate is also the lowest in the nation.

Over in the Mountain West, Colorado has also experienced tremendous growth in oil and gas output from the Niobrara Shale, with oil production in the state up 146 percent and natural gas up 38 percent between 2007 and 2012.  Meanwhile, back east, the Marcellus Shale has become the largest producing shale gas basin in the world — accounting for nearly 40 percent of all U.S. shale gas production. As the Charleston Daily Mail editorial team recently summarized, the Marcellus is a “big bright spot for West Virginia and the three-state region around northern West Virginia.”

Even Texas, a state known for its historic energy output, has been revitalized by the advances of hydraulic fracturing and horizontal drilling. According to EIA, “Texas production topped 3.0 million bbl/d for the first time since the late 1970s, more than doubling production in the past three years.” As EID has reported before, the Lone Star state is now producing 36 percent of America’s oil while rivaling some of OPEC’s largest oil suppliers.

As shale development continues to soar across the nation, the United States is reaping the benefits. As U.S. Federal Reserve Ben Bernanke recently stated, the American energy resurgence is “one of the most meaningful developments” for the U.S. economy in the past several years. Unsurprisingly, a member of the Saudi Arabian royal family has called American shale development “an inevitable threat” to its operations.

Check out EID’s new infographic – “Oil and Gas Development Soars Across the Nation” – to learn more about how shale development is enhancing America’s energy output across the country.