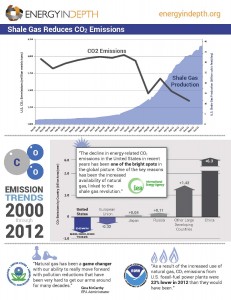 According to the Energy Information Administration (EIA), U.S. carbon emissions are at their lowest level since 1994 – thanks in large part to American shale development.

As EIA and the International Energy Agency (IEA) have both highlighted, natural gas produced from American shale plays has provided a transformative opportunity for the United States to reduce its greenhouse gas emissions. From IEA’s World Energy Outlook report:

“The decline in energy-related CO2 emissions in the United States in recent years has been one of the bright spots in the global picture. One of the key reasons has been the increased availability of natural gas, linked to the shale gas revolution.”

As Environmental Protection Agency (EPA) Administrator Gina McCarthy stated in December 2013, “natural gas has been a game changer with our ability to really move forward with pollution reductions that have been very hard to get our arms around for many decades.” In fact, the National Oceanic and Atmospheric Administration (NOAA) has credited the increased use of natural gas as the primary reason CO2 emissions from U.S. power plants “were 23 percent lower in 2012 than they would have been” otherwise. Meanwhile, development of these vast resources is creating new jobs, supporting American manufacturing, and providing clean-burning base load power for renewable energy sources.

The recent release of the Intergovernmental Panel on Climate Change (IPCC’s) new report on the impacts of global climate change has many people around the globe discussing the role and importance of reducing global greenhouse gas emissions. Luckily for the United States, the development of natural gas from shale has helped us reduce our CO2 emissions more than any other country. Download EID’s new infographic — “Shale Development Reduces CO2 Emissions” – to learn more about how natural gas production from shale is helping America reduce its greenhouse gas emissions.