Cornell professor and anti-fracking activist Anthony Ingraffea recently traveled to Mercyhurst University in Erie County, Pennsylvania where he peddled his previously debunked research on shale development to community members and students –a majority of which were there for extra credit.

For those not familiar with Ingraffea, he is the president of Physicians Scientists & Engineers for Healthy Energy (PSEHE), an organization that is funded by the anti-fracking Park Foundation and whose goal is to shut down shale development in America. During his presentation Ingraffea made many claims, which have been overwhelmingly contradicted by scientists and regulators. Let’s have a look at these claims followed by the facts:

FACT: This isn’t the first time Ingraffea has called natural gas a “gangplank,” but scientists and experts have debunked Ingraffeas’ claims over the years, so much so, that they are very rarely taken seriously. In response to Ingraffea’s gangplank comment, Raymond Pierrehumbert, a climate scientist from the University of Chicago explained,

“But what Ingraffea is doing in continuing to claim that natural gas is as bad as coal is not a matter of looking at the same data as everybody else and drawing different conclusions. It is more a matter of distorting science in order to support a preconceived political agenda.” (emphasis added)

“Howarth [and Ingraffea] cares so much about banning shale gas that he has gone off the cliff into misinformation and propaganda. He has proven that he will say anything and use any means to advance his rabidly held end. The new Cornell paper ends the scientific credibility of Howarth and Ingraffea.”

The reality is that, thanks to shale development, which has unlocked vast reserves of natural gas, the United States is actually leading the way in the reduction of C02 emissions. The Intergovernmental Panel on Climate Change (IPCC) has praised the development of natural gas for the reduction in greenhouse gas emissions in the United States, stating:

“A key development since AR4 is the rapid deployment of hydraulic fracturing and horizontal drilling technologies, which has increased and diversified the gas supply… this is an important reason for a reduction of GHG emissions in the United States.” (emphasis added)

And, because of the transition to natural gas power generation, carbon emissions in April of this year were the lowest for any month since April 1988 – a 27 year-low. 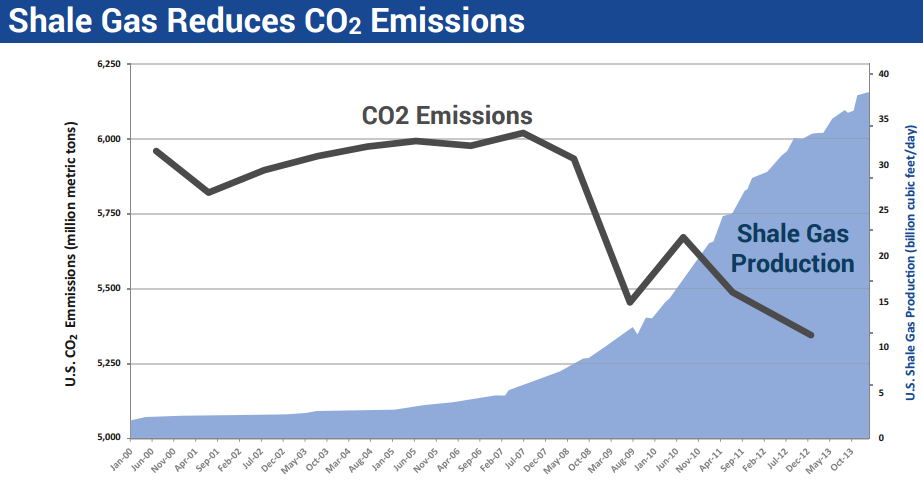 Recent comments from Secretary of Energy Ernest Moniz in the Washington Examiner encourage the use of natural gas to help transition us to a low carbon future. According to Moniz:

“The electricity sector would likely be decarbonized the quickest in the United States thanks to the proliferation of natural gas. Is natural gas part of the answer or part of the solution? Yes.”

Claim #2: “Shale gas development is inherently inefficient. As a licensed practicing professional engineer I abhor inefficiency, it reeks of inelegance and ignorance.” (5:44)

FACT: Fortunately, this claim couldn’t be further from the truth. America’s oil and gas industry has made great strides in the efficiency of new wells. The below graphic from the Energy Information Administration (EIA) shows that despite lower rig counts here in Pennsylvania, natural gas production is continuing to increase. 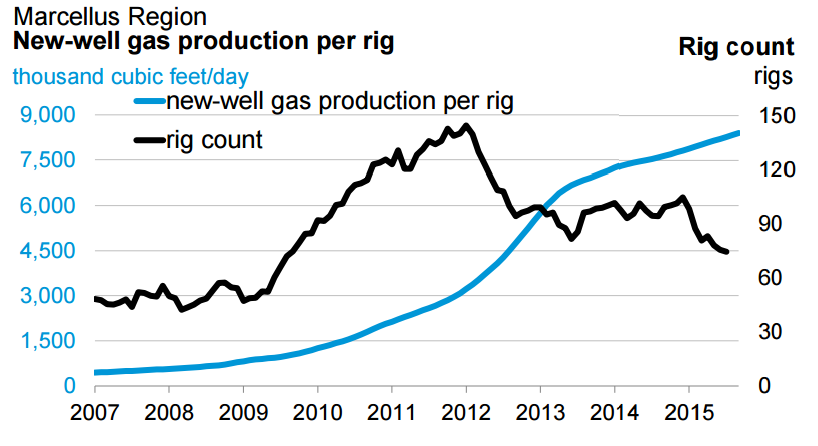 And with improved technology and low commodity prices, shale operators continue to lower the costs it takes to drill new wells while increasing production. This is great for American consumers because efficient domestic natural gas development means lower heating costs this winter.

Claim #3: “The more fluid you pump down, the more fluid comes back up as no longer fresh water, no longer drinkable water, but waste water that leaves the water cycle. Some of it stays down there forever, some of it comes back up, gets in a truck, goes to Ohio, goes down an injection well.” (emphasis added, 19:00)

FACT: There’s a huge piece of context missing here. From this statement, anyone not familiar with Pennsylvania’s shale industry would assume that all the flowback is trucked and disposed of in Ohio, but this is simply false.

According to the Pennsylvania Department of Environmental Protection (DEP), oil and gas operators in Pennsylvania are recycling 90 percent of their flowback water and reusing it to frack other wells. This not only helps producers in efficiently managing wastewater, but reduces the amount of fresh water used by the industry as well. And not only is this industry best practice being used here in the Appalachian region, but it’s being deployed in shale regions across the United States. From an Associated Press article:

“Just a few years ago, many drillers suspected water recyclers were trying to sell an unproven idea designed to drain money from multimillion dollar businesses. Now the system is helping drillers use less freshwater and dispose of less wastewater. Recycling is rapidly becoming a popular and economic solution for a burgeoning industry.” (emphasis added)

Ingraffea’s comments on the management of flowback completely ignore best practices being deployed by America’s oil and gas industry and only served to mislead the Mercyhurst University audience.

Claim #4: “If your water well is suddenly contaminated with methane and the state of Pennsylvania classifies methane as a contaminate, state regulations chapter 78, methane is a contaminate. So if your water well was fine and you wake up one morning and it’s fizzing and you can light it on fire at the tap. Industry says that was a coincidence, the methane was always there and you didn’t know. It was naturally occurring they say.” (23:54)

FACT: Ingraffea’s comments ignore multiple studies from the united States Geological Survey (USGS) – see here, here, here and here – where they tested water wells in areas with no oil and gas development, only to find that a majority of those wells were contaminated by naturally occurring methane. From one of the USGS reports:

Ingraffea must have also not realized that even in his home state of New York there have been instances of flammable methane in water wells.

But what about water wells containing methane that are in areas of oil and gas development in Pennsylvania? Well, what has been touted as the most comprehensive groundwater study in the region has found that water wells near oil and gas activities have had no broad change in quality. From the Syracuse University report:

“Our comparison of these results to historical groundwater data from NE Pennsylvania, which pre-dates most unconventional shale gas development, shows that the recent pre-drilling geochemical data is similar to historical data. We see no broad changes in variability of chemical quality in this large dataset to suggest any unusual salinization caused by possible release of produced waters from oil and gas operations, even after thousands of gas wells have been drilled among tens of thousands of domestic wells within the two areas studied.”(emphasis added)

The same report also found that much of the state has had water quality issues since long before any gas drilling occurred nearby, stating that,

These facts are backed by findings from a comprehensive five-year EPA report which found, “hydraulic fracturing activities have not led to widespread, systemic impacts to drinking water resources.”

Yet, none of this was mentioned in Ingraffea’s presentation.

It’s clear that Ingraffea’s presentations are designed to mislead the public and malign America’s oil and natural gas industry – an industry that has created hundreds of thousands of jobs across the country. The facts speak for themselves and it’s our hope that universities that give time to Ingraffea also give fair time to people willing to provide the facts and have a rational conversation about the future of energy production here in America.