The Institute for 21st Century Energy this week released an update of its annual electricity price map, further confirming that the shale gas revolution is pushing energy costs to record lows.

Based on U.S. Energy Information Administration (EIA) year-end data for 2016, the price map shows that states that embrace shale resources experienced drops in electricity costs in 2016 and that electricity prices nationwide continue to fall. The map’s accompanying press release reports that the national average electricity price per kilowatt hour (kWh) fell .13 cents to 10.28 cents/kWh from 2015 to 2016. 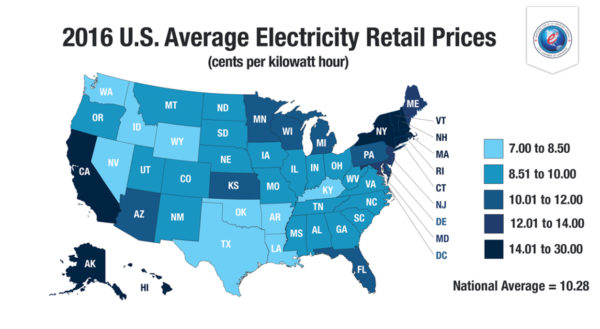 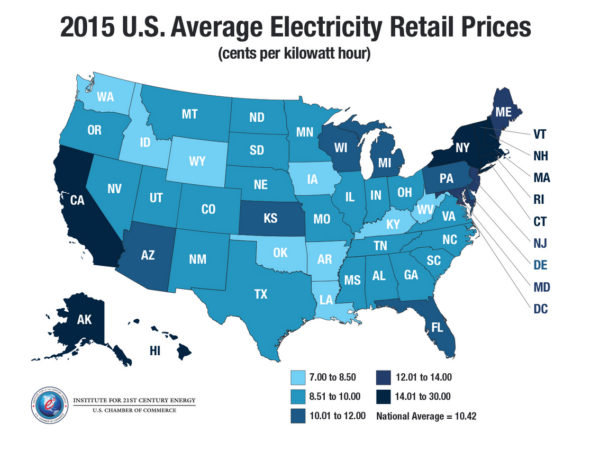 According to the report, 27 states experienced declines in their average retail electricity prices last year, thanks in large part to abundant and affordable shale gas,

“Thanks to the extraction of shale gas on primarily state and private lands, America’s vast energy resources have stemmed the tide of an upward spiral in electricity rates,” the 2016 report notes. “If this Administration enhances access to shale and the many other sources of energy available on Federal lands, the next few years have the potential to continue 2016’s trend toward lower retail electricity prices.”

The report also notes, “… states such as California, New York, and many in New England, experienced declines in their 2016 average retail electricity prices” despite energy-limiting policies. The report notes that “the expansion of America’s vast shale resources has at least softened the blow of these policies due to the fact that these states are highly dependent upon natural gas for a large share of their electricity generation,” going on to point out that:

“With respect to the Northeast, they could further moderate their high prices if they embraced the numerous benefits available through the enhancement of their currently limited natural gas pipeline infrastructure.”

Additionally, eight of the top 10 natural gas producing states — including Texas, Pennsylvania and Oklahoma — saw a decline in electricity prices. It is a lesson to be learned by states that embrace energy stringent regulations.

Due to their limited access to diverse energy sources, Alaska and Hawaii reported the highest electricity prices of any U.S. state. They were followed by 23 other states that saw an increase in their 2016 electricity bills. Notably, these states — Iowa, Kentucky, Utah, West Virginia and Wyoming — rely on a relatively small percentage of natural gas-fired electricity generation when compared to many other states.

Overall, the data demonstrates the benefit of shale resources on market conditions, most notably for consumers. As EID previously reported, “retail electricity prices fell 2.2 percent from 2015 to 2016 and consumers paid 3.9 percent lower prices than a decade ago,” enabling consumers to spend less than 4 percent of their income on energy, which is the smallest share ever recorded by the United States government.