Is ‘Big Oil’ to blame for California’s gas prices? Not so fast.

As spring becomes summer, there are a few things about which Californians always justifiably complain. June gloom. The waiting list for a boat to Alcatraz. The Major League team that isn’t living up to its potential (I’m looking at you, Dodgers).

But nothing is more predictable than Californians – and the media (see here, here, here, here, or here) – highlighting the rising price of gasoline. This is understandable, as Californians love to drive around our beautiful state – particularly when the kids are out of school – and we routinely have some of the highest gas prices in the country. We are now uncomfortably close to averaging $4 per gallon.

Anti-industry activists, of course, like to prime their torches and pitchforks and blame “Big Oil” for the prices at the pump, but there are a host of factors that go into the price consumers pay, particularly this year – factors that have little or nothing to do with oil producers and certainly little to do with the industry’s highly exaggerated profits, which I will discuss below.

To help you visualize what goes in to the price of the average gallon of fuel, the Energy Information Administration (EIA) put together the following graphics: 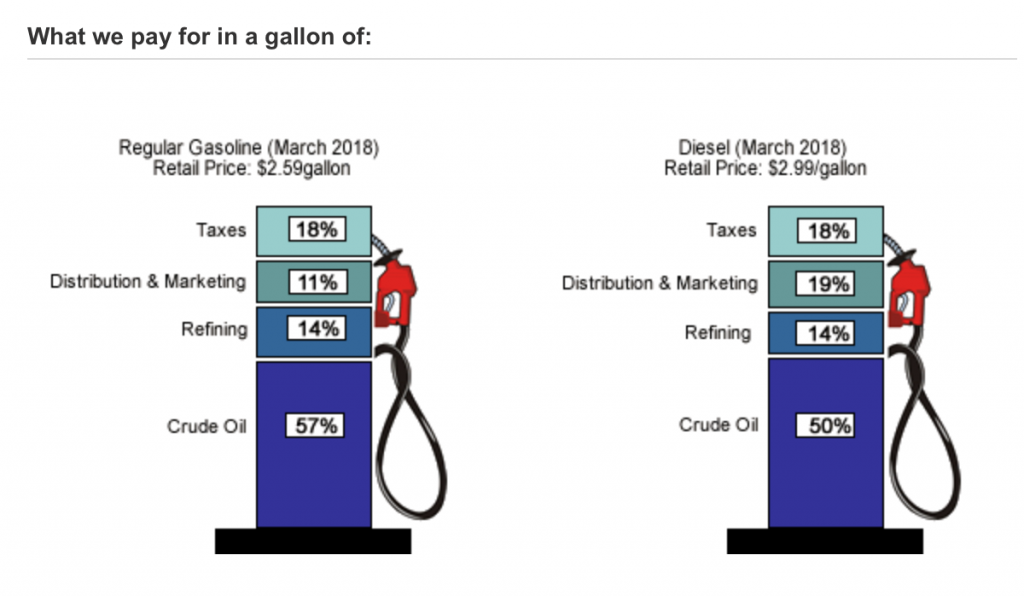 Below is a quick overview of the many factors that determine what you will pay at the pump this summer in California, along with a little perspective on why attacks on “Big Oil” for gas prices are misguided.

Factor #1: Gasoline prices generally track global commodity prices. Refined products like gasoline are traded on the world market and their prices are determined by global market prices, in this case, the global Brent crude index. According to an Energy Information Administration (EIA) report:

“Gasoline is a globally traded commodity and, as a result, prices and changes in prices are highly correlated across global spot markets.” 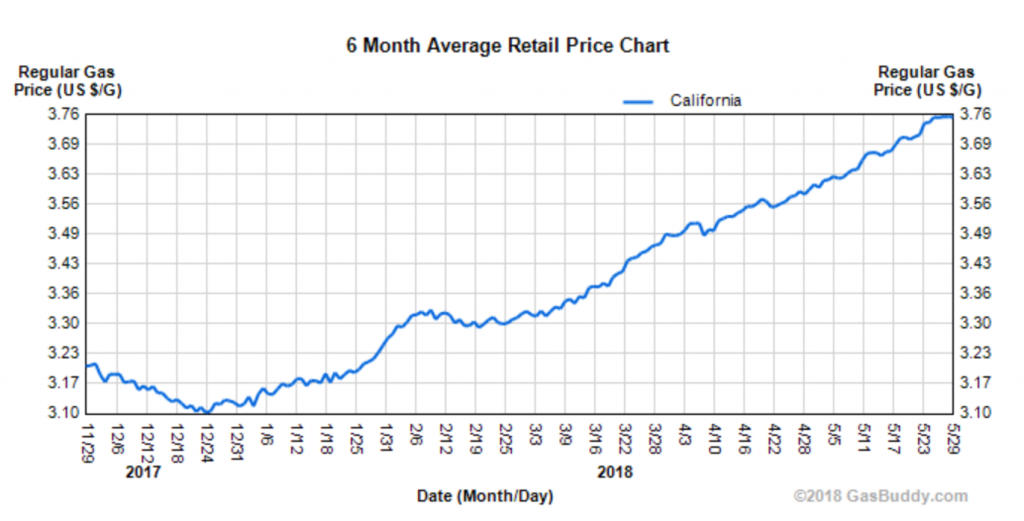 Since January, the Brent crude oil is up about nearly 15 percent and California has seen a similar uptick – closer to 20 percent – because of the factors listed below, some of which are self-inflicted and avoidable.

Factor #2: Switch to more expensive “summer blend.” By now, most people know that refiners are required by federal regulation to switch to blend of fuel that has a different evaporation point to help prevent smog. The good news for the consumer is that the more expensive gasoline is offset somewhat by improved fuel economy.

Factor #3: Taxes (and taxes and taxes) and regulation. It’s no secret that California is one of the highest taxed states in the nation. We have the highest sales tax (7.25 percent) as well as the highest state income tax rate in the country (13.3 percent top marginal rate). We also have the strictest environmental regulations in the country, which, when combined with federal regulations, mean that the energy industry in the Golden State complies with more layers and levels of government than anywhere else – which bring with it obvious compliance costs not faced by producers in other states. There are nearly 20 agencies that in one way or another regulate the oil and gas industry in Los Angeles County alone.

While our taxes provide important funds for schools, healthcare, social programs, pensions and infrastructure, the money has to come from somewhere, and California policymakers have frequently targeted gasoline as a way to build state coffers as the legislature did last year when it passed, and Governor Brown signed, Senate Bill 1, a 12 cents-per-gallon tax increase on gasoline and a 20 cents-per-gallon tax increase on diesel last year. This is not, obviously, the doing of “Big Oil.”

“State and federal laws like the recently approved gas tax, the Low Carbon Fuel Standard and other fuel-related taxes and fees add a little over 92 cents to each gallon of gas and have a profound impact on California’s businesses and communities.” [emphasis added]

It is actually more than 95 cents per gallon, as new analysis of the impact of Senate Bill 1 has shown: 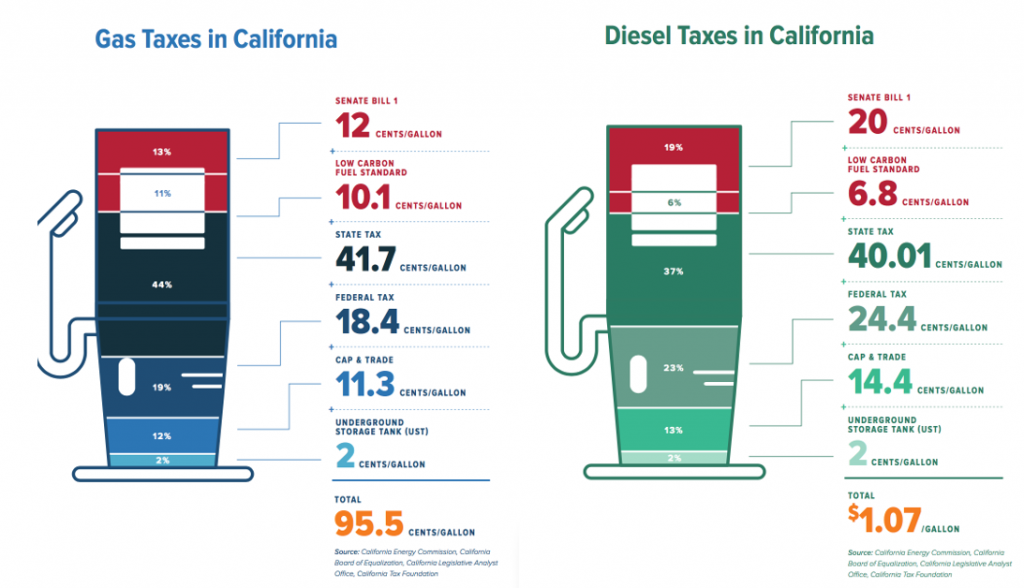 Factor #4: State socialism failed (surprise!) in Venezuela. Venezuela has the world’s largest proven oil reserves. Great news, right? If only. Because of mismanagement of both the state-owned oil sector and overall chaos in the top-down, socialist economy, oil production is down 30 percent. This creates much more pressure on other oil producers and naturally pushes prices up as supply dwindles.

Factor #5: Middle East turmoil and uncertainty. A host of factors involving the Middle East have collectively pushed oil prices upward. OPEC has, for a variety of reasons, slashed production in a deliberate attempt to increase prices, removing an estimated 500 million barrels of supply from the global market since cuts started in early 2017. President Trump’s mere threat to bomb Syria in the wake of a chemical weapon attack last month sent prices to a four-year-high even before the actual bombing. And President Trump’s eventual decision to pull out of the Iran deal will limit Iran’s ability to sell oil on the international market, which is most likely causing similar pressures as Venezuela’s involuntary but just as damaging (for gas prices) decrease in supply.

What about the impact of oil exports? Some politicians – notably Sen. Ed Markey (D-Mass.) have seized on the lifting of the misguided crude oil export ban, arguing in a report that “… Congress should reinstate the crude oil export ban to ensure that American crude stays here, insulates us to the greatest extent possible from global shocks, and protects American consumers at the pump.”

As Energy In Depth has shown, this betrays a complete misunderstanding of how global markets work. As noted above, crude oil is a commodity traded on the global market and gasoline price changes are closely tied to global market prices. The argument that if, at a time of record oil production, the United States should keep crude here instead of exporting it when gasoline prices are high, ignores the fundamental nature of the market. Indeed, EIA reports that our domestic oil inventories are surging even as we export into the global marketplace.

The Brookings Institution, not a bastion of free market ideologues, issued a 2015 report that noted:

This article isn’t intended to make anyone – not you, not me – feel better about the pinch of more expensive summer gas. It is, however, an effort to show that the “Blame Big Oil!” activists might want to direct their torches and pitchforks elsewhere.

What about those profits? Activists, and those influenced by their rhetoric, routinely accuse “Big Oil” or making “obscene” profits, suggesting that the exploration and production of oil – which is highly cost intensive – is outlandishly profitable. Thus, any increase at the pump must surely be a sinister plot to squeeze even more profit from the public.

This, however, isn’t the case. According to the Fortune’s calculations when releasing the Fortune 500, only one oil and gas company – Exxon Mobil at number 10 — was among the 10 most profitable companies in the United States.

This makes sense when you think about the enormous costs associated with exploring for oil miles under the surface when there is never a guarantee of success.

It could be worse but California policymakers could make it better. OK, that isn’t very comforting, but it is worth remembering that only six months ago we experienced record-breaking U.S. oil production, thanks to the fracking boom and the renaissance it created. This record domestic production – which, sadly, California hasn’t kept up with – has mitigated price impacts on gasoline around the country over the past several years. A few years ago, for example, American Automobile Association (AAA) estimated that the shale boom was saving drivers about 50 cents per gallon. The impact is likely larger today, because production levels are even higher.

Unfortunately, in California, we are an energy island with no interstate crude oil pipelines. We not only consume all of the oil that we produce, but we have to import more than half of it from places with laxer environmental regulations and from places like Russia and Venezuela that that don’t share our geopolitical interests. A concern for energy independence and security, not to mention more good California jobs, suggests that producing more oil in California is better for our security, our environment, and the economy – not to mention that it would put downward pressure on gas prices.

It’s all relative. While the average price of a gallon of gas in California is around $3.50 per gallon or higher, you could be living in Europe where you’d pay (converted to dollars per gallon) $6.29 in the United Kingdom, $6.56 in Germany, and $7.88 in The Netherlands.

As this article has shown, while more domestic production would certainly help, there are many, many external factors that go into what makes a gallon of gas in California cost what it costs. It might not be fun to pay more to fill up the tank, but at least we can count our blessings: we could live in Iceland ($7.97 per gallon) or have cars that run on bottled water.