Previously only a bit-player in the statewide debate over shale gas development in New York, Ithaca-based Cornell University has recently emerged as a hotbed of activism and steady purveyor of slanted scholarship in opposition to those efforts – as they relate to New York, certainly, but increasingly in a national context.

Just in the past two months, professors from Cornell have convened ad hoc “science” panels for the purpose of examining the putative link between hydraulic fracturing and water contamination, and haveeven traveled to Washington, D.C. to conduct briefings for staff on Capitol Hill. According to those who attended, the message communicated by the professors was a simple one: Pass the FRAC Act. Right now.

The latest attack from Ithaca, N.Y., released two weeks ago by Cornell and dutifully reported on by Reuters freelancer Jon Hurdle this week, takes the form of a two-and-one-half-page, 1,000-word “study” in which the assertion is made that natural gas “obtained by hydraulic fracturing” is in fact “far less attractive than other fossil fuels in terms of the consequences for global warming.” This internal issue alert identifies the professor’s main arguments, puts them in the proper context, and, when necessary, corrects the inaccuracies and inconsistencies contained therein.

The argument. Fundamentally, the assertion put forth by Cornell professor Robert W. Howarth goes something like this:

Premise #1: It may be true that natural gas emits far less greenhouse gases (GHG) per unit of energy consumed than fossil fuels such as diesel, gasoline and coal.

Premise #2: But previous studies of natural gas’s relative advantage in this area have not accounted for the methane (CH4) that’s leaked into the atmosphere as a natural consequence of its production.

Supposition: Accounting for these methane leaks in the production of natural gas “obtained by hydraulic fracturing,” it becomes possible to claim that natural gas produces greater GHG-related emissions than all other fossil fuels, most notably coal.

The problems/questions. We’ll start with the most obvious ones, and work our way down from there: 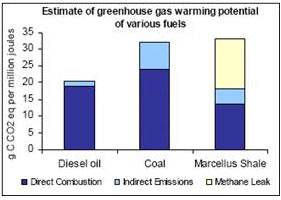 As you can see here, that huge beige box stacked atop the “Marcellus Shale” natural gas column is key to Prof. Howarth’s argument — without it, natural gas would score significantly lower in GHG-emissions than coal and diesel oil, and his paper would be ruined. Understanding that, the professor is careful not to add any “methane leak” emissions onto the coal and diesel columns – despite the fact that both emit methane as a consequence of their production. This chart from EPA tells us just how much:

Accounting for the additional 5.7 teragrams of carbon dioxide equivalents emitted each year from abandoned coal mines (also according to EPA), the amount of methane emitted during coal’s lifecycle is roughly 60 percent of the amount emitted during the process of producing, well, methane itself. So why isn’t any of that represented in the professor’s chart?

Government and industry should not be moving ahead on the basis of what is already misleading and incomplete information,” Howarth told Reuters.  He urged the moratorium on further developmentin the multibillion-dollar industry until more is known about its greenhouse gas emissions.

And just in case any lingering doubt remained as to the professor’s core motives in launching this assault, this paragraph, found on the first page of his “report,” should help clear the air:

Nonetheless, until better estimates are generated and rigorously reviewed, society should be wary of claims that natural gas is a desirable fuel in terms of the consequences on global warming. Far better would be to rapidly move towards an economy based on renewable fuels. Recent studies indicate the U.S. and the world could rely 100% on such green energy sources within 20 years if we dedicate ourselves to that course.

Emphasis his. Of course, the Energy Information Administration says that 79 percent of America’s energyin the year 2030 will be derived from fossil fuels. They account for 85 percent of our demand today. We believe in renewables here at Energy In Depth. We don’t believe in magic.