It’s Official: United States Was a Natural Gas Net Exporter for First Time in 60 Years in 2017 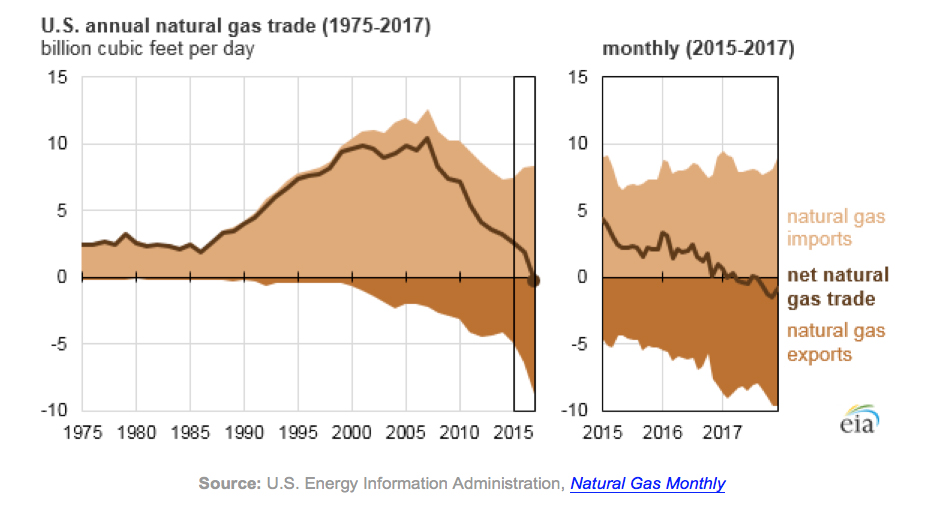 The United States exported more natural gas than it imported in 2017, according to a report from the U.S. Energy Information Administration released on Monday. Driven by growth in domestic production through shale development, this marks the first time since 1957 that the United States has been a net exporter of natural gas. With production growth expected to continue, as well as new liquefied natural gas (LNG) terminals coming online over the next few years, America’s future as a player in the global natural gas market looks remarkably bright.

The United States, already the world’s largest producer of natural gas and petroleum liquids, saw natural gas production soar to remarkable heights last year. With production growing at breakneck speed in the Permian and Appalachian basins, U.S. natural gas production increased almost 43 percent from 2007 to 2017, reaching an average of 73.6 billion cubic feet per day (Bcf/d) last year, which was just shy of the all-time record. As a result, the United States reduced its reliance on foreign natural gas imports by 66 percent in the last decade and solidified its position as a global exporter of natural gas.

This report from EIA further shows increasing natural gas production is not only transforming the domestic energy market, it’s having global implications as well, as greater U.S. liquefied natural gas (LNG) exports reach trading partners around the world. As the chart below shows, U.S. LNG exports were virtually non-existent prior to 2015, but with the massive increase in U.S. natural gas production, LNG exports have soared over the past two years to nearly 2 Bcf/d. 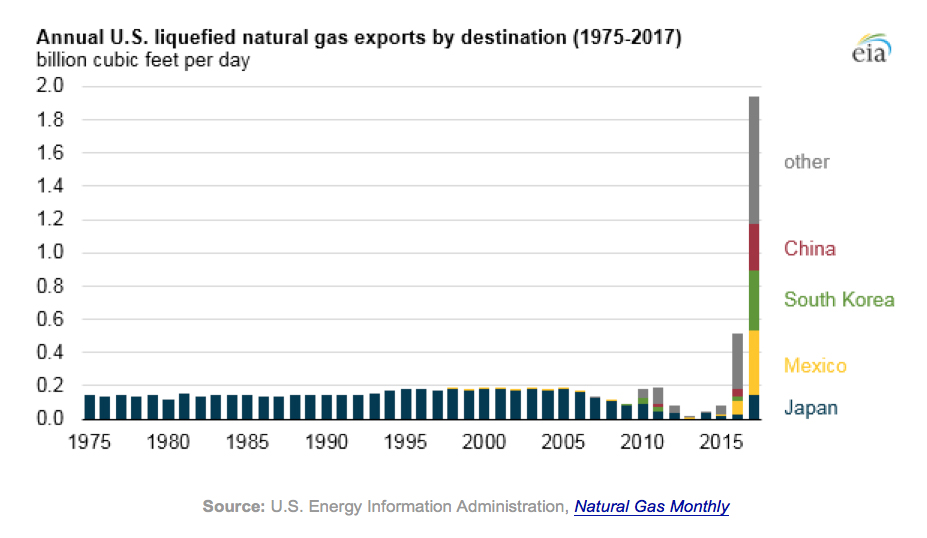 The International Energy Agency (IEA) predicts the United States will soon account for one-fifth of global natural gas production and challenge Australia and Qatar as a leader in LNG exports by 2022. As IEA Executive Director Fatih Birol recently said:

“The US shale revolution shows no sign of running out of steam and its effects are now amplified by a second revolution of rising LNG supplies. Also, the rising number of LNG consuming countries, from 15 in 2005 to 39 this year, shows that LNG attracts many new customers, especially in the emerging world.”

The United States took a step toward reaching this level of top LNG exporter on Tuesday, as the first LNG cargo sent from Dominion Energy’s newly opened Cove Point facility reached the United Kingdom. Cove Point is just one of two LNG export terminals in the contiguous U.S., but there are four additional LNG export projects under construction in Georgia, Texas and Louisiana, as the United States is expected to increase its total liquefication capacity to 9.6 billion cubic feet per day (Bcf/d) by the end of 2019. This additional capacity will be vital, as demand for LNG is expected to see 3.8 percent average annual growth until 2020. 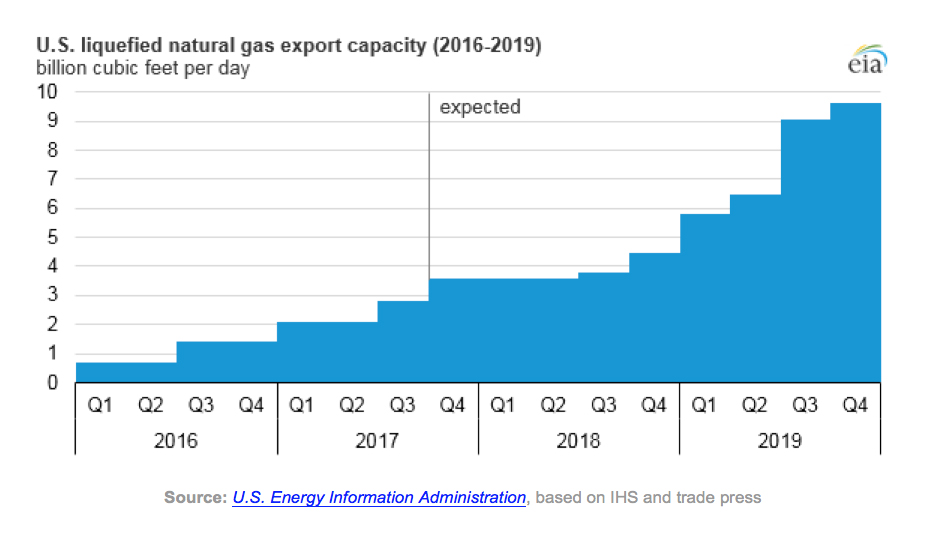 In addition to bolstering U.S. energy exports, increased LNG exports will have a significant impact on the U.S. economy. According a report by the American Petroleum Institute (API), LNG export volumes of up to 16 Bcf/d in 2040 could support between 220,000 to 452,000 additional jobs and add $50 to $73 billion to the U.S. economy.

Thanks to technological innovations such as hydraulic fracturing, the United States — now a net exporter of natural gas — continues to upended energy markets and further cement its position as a global energy leader. As shale development continues to expand, U.S. natural gas is poised for a spectacular future.