A state representative from Western Pennsylvania has attacked the Pennsylvania DEP in a story reported in the New York Times and elsewhere with some fanfare, but readers need to know the background of the accusers, the real causes underlying their complaints and the facts about what belongs and doesn’t belong in a testing report.

State Rep. Jesse White of Washington County has attacked the Pennsylvania Department of Environmental Protection (DEP) on the word of a junkyard plaintiff, leaving out essential background on the circumstances of the complaint as well as the plaintiff and offering no discussion of how Pennsylvania’s procedures line up with other states.  This has generated some misleading headlines and excited natural gas opponents – but a closer look at the facts reveals a tale quite different from the one being reported in The New York Times.

The first thing you need to know is that lawsuit in question involves a Washington Co., Pa. junkyard owner named Loren Kiskadden against Range Resources for what are alleged to be health issues related to a natural gas wellsite nearby.  Kiskadden claims, according to the Times, to have nausea, bone pain, breathing difficulties and severe headaches he says are consistent with exposure to “hazardous chemicals and gases through air and water.”  The Times also then picks up on the theme of Mr. Kiskadden’s attorney, who, with the help of Rep. White, asserts that DEP had somehow kept testing data from them all.  DEP very effectively countered the last part of the story with the facts and EID has offered further perspective here.

But there’s still more to the story – a lot more – and it relates directly to the allegations being made.  A discerning reader will want to know the rest.

And, here’s some more perspective on the junkyard Kiskadden operates: 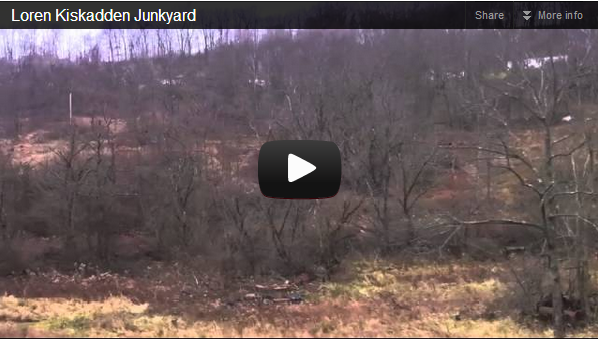 Is it possible the junkyard on Kiskadden’s property is the actual source of the impact to his water?  DEP thinks so and expressed this view in a letter to the owner in September, 2011.  Additionally, DEP took notice of the hydrologic conditions in the area and, in the picture above, you can see the property is located in an area of Newark Silt Loam (Nw) with a soil profile that – according the county soil survey (above) – characterizes the limitations for development of dwellings as severe (page 75) due to wetness and flooding.  It also has a shallow seasonal high water table (page 19) and is moderately permeable, which means the fluids and other substances that drain from or come off junked vehicles are easily transmitted to groundwater.  Of course, flooding doesn’t help either.

What might those pollutants be?  Well, the EPA offers some hints in the fact sheet that follows, which indicates they include oil, grease, arsenic, organics, heavy metals and total suspended solids (TSS).  Heavy metals?  Heavy metals are defined by the EPA as  ”Metallic elements, such as mercury, lead, nickel, zinc, and cadmium, that are of environmental concern because they do not degrade over time. Although many are necessary nutrients, they are sometimes magnified in the food chain and in high concentrations can be toxic to life.”

Representative Jesse White’s news release challenged DEP for not giving Kiskadden test results relating to “Silver, Aluminum, Beryllium, Cadium, Cobalt, Chromium, Copper, Nickel, Silicon, Lithium, Molybdenum, Tin, Titanium, Vandium, Zinc and Boron” – and several of these just happen to be on both lists.  How about that.  More important, though, none of them are used in natural gas development.  Kiskadden’s legal counsel is quoted in the Times as saying “the metals not reported in Mr. Kiskadden’s tests have been identified by industry studies as being found as contaminants in water produced from oil and gas operations.” But those are  studies relating to flowback and produced water – both primarily generated from using local water sources that already contain those contaminants at low levels.  Suggesting this is evidence of contamination from natural gas development is circular reasoning.  Saying “you used my water to fracture your gas well and now those pollutants that were in that water to begin with have polluted my well” doesn’t make the cut.

It appears Mr. Kiscadden, Rep. White and his fellow “fractivist” friends all want DEP to tell this plaintiff he could be polluting his own well, even though everything falls below EPA thresholds for contamination and, again: none of these elements are employed in natural gas development.  It’s hard to take such arguments seriously.

It’s even harder to take this junkyard plaintiff seriously.  Mr. Kiskadden is a very litigious individual.  Here is a list of the legal matters involving him that are on record in the Washington County Courthouse:

The Kiskadden’s have been involved in 23 civil cases in Washington County since 1987, almost one a year.  It’s not clear if this qualifies for an honorable mention in the Guinness Book of World Records, but one suspects it should.  This is only the civil list, however.  Kiskadden, according to MugShots.com, also did prison time and has a mugshot that does him no flattery.

Kiskadden has had several run-ins with the law, in fact, as this article from 1995 and a search of Google archives indicates:

Loren Kiskadden is hardly a plaintiff who would seem to warrant the special attention of a state representative.  One suspects, therefore, this is really about something bigger – about Representative Jesse White’s desire to appeal to a particular constituency of natural gas opponents who consider him one of their own.  He’s certainly aligned himself, over and over again, with the same folks and the same attorneys.  Mr.Kiskadden’s legal counsel, in fact, comes from the same firm, Smith Butz, that also represents Cecil Township, which is challenging Act 13 and has enacted an ordinance regulating details of natural gas development plainly prohibited by this legislation.  Attorney John Smith, of Smith Butz and Solicitor for Cecil Township, is also a contributor to Jesse White’s campaigns.  His firm’s letter to DEP is what White offers as an excuse for his own actions, even though that letter offers not a single piece of evidence to suggest the contaminants in Kiskadden’s water exceeded Safe Drinking Water Act standards and no indication the lab technician quoted thought DEP had done anything inappropriate.  Interestingly, the letter also quotes a report to the Marcellus Shale Commission to suggest it documented the contributions of heavy metals to water streams by the natural gas industry.  Here’s what it actually says (page 34, emphasis added):

Heavy metals of toxicological concern that are often associated with urban industrial activity (including chromium, copper, nickel, zinc, lead, cadmium, mercury and arsenic) are at very low levels in all of the shale gas water samples compared to levels reported for municipal wastewaters.  Table 10 presents range values from the 5-Day Flowback samples which are compared to median heavy metals concentrations measured in sewage sludges (biosolids) generated by Penn State for the State of Pennsylvania (Stehouwer, 2000); note that concentrations in this table are reported in mg/l.  The comparison shows that the levels of heavy metals of concern are 100 to 10,000 times higher in municipal biosolids (sewage sludges that are routinely transported across communities to disposal sites) than the levels measured in shale gas waters.

Moreover, that same report ties into DEP’s September letter to Kiskadden, which notes the presence of Chloride is the best method for detect possible contamination from surface spills or wellbore integrity issues.  This is fully explained on pages 37-39 of the report.

All this, of course, only goes to credibility and motives.  What is more important than any of this is the patently obvious nature of what is taking place with Jesse White’s attack on the DEP.  He has somehow had access to a deposition in a legal case that hadn’t yet even been give to all the parties.  He made that deposition public and then twisted the words to suggest, incorrectly, that the person disposed was a “whistleblower” when all she did was tell the truth about a process that matches what takes in other states, meets best practice standards and has revealed no contaminants above safe levels in the case of the plaintiff’s water supply.  Even worse: whatever contaminants exist in that water supply are far more likely to come from the plaintiff’s own activities, as demonstrated above.  This, then, predictably became a New York Times headline entitled “Pennsylvania Report Left Out Data on Poisons in Water Near Gas Site.”  It is a powerful illustration of how the natural gas opposition works and Jesse White has provided a window into this world of deception.