The irony is strong here.

The Biden administration has yet to lift its illegal ban on oil and gas leasing for federal lands and waters – despite a judge ordering them to do so nearly two months ago – while at the same time begging OPEC+ to boost its oil production to help lower American gasoline prices.

POLITICO reported that a federal judge ordered the Interior Department to finally address the hold up of federal lease sales after weeks of delay:

“Judge Terry Doughty of the U.S. District Court for the Western District of Louisiana has given the Biden administration until Aug. 24 to reply to the Monday filing by Louisiana and other states arguing that the Interior Department has defied his order to hold Lease Sale 257 in the Gulf of Mexico. The states will then have another seven days to respond, setting up potential action in September.”

Louisiana and 12 other states submitted this latest court filing because the Interior Department still has not scheduled or held new lease sales despite a ruling from Judge Doughty on June 15 that said the leasing ban was illegal and granted a preliminary injunction lifting the ban.

The Interior Department said it would “comply with the decision” from Judge Doughty, but nearly two months later, it still has not done so, nor has it released the environmental review that it has used to justify the ban, despite Secretary Haaland saying it would come out in “early summer.”

In fact, in a recent exchange with Sen. Cindy Hyde-Smith (R-MS), Secretary Haaland acknowledged the ban is “still in effect,” and alluded that it would not be lifted until the report is published.

Messaging on leasing pause is a bit confusing. Haaland just now, “Technically I suppose you could say the pause is still in place. However we are complying with the court order.”

…But Let’s Have OPEC+ Increase Its Oil Production.

“Higher gasoline costs, if left unchecked, risk harming the ongoing global recovery. The price of crude oil has been higher than it was at the end of 2019, before the onset of the pandemic.

“While OPEC+ recently agreed to production increases, these increases will not fully offset previous production cuts that OPEC+ imposed during the pandemic until well into 2022. At a critical moment in the global recovery, this is simply not enough.”

In other words, the Biden administration is blocking domestic production of oil and natural gas, while demanding foreign countries produce more oil to lower the price of oil which would eventually lower U.S. gasoline prices.

This is a far cry from just five years ago when U.S. producers quite literally helped drill our way to lower gasoline prices under the Obama administration.

As Goes California, So Goes The Rest of the Country?

Californians are feeling the repercussions of similar policies play out in real time. For years, the state government has undermined its own production, including a recent campaign to deny fracking permits. But that doesn’t do anything to lower demand, so now the Golden State is increasingly relying on foreign oil imports.

In fact, just one month after California’s governor announced his plans to ban fracking, the state doubled its oil imports from Russia. In May, the United States imported more oil from Russia than ever before, most of which went to California. 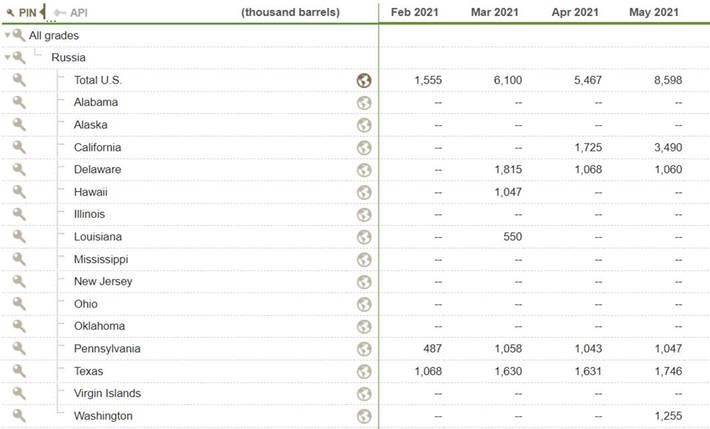 Americans across the country are calling for greater domestic energy production to lower gasoline prices and support economic development in their communities. Meanwhile, the president is begging foreign countries to produce more oil – an outcome that will lead to more investment and more jobs outside of the United States.

As Jakob Puckett, a policy analyst with the Show Me Institute, summed up the absurdity of this strategy in National Review, saying:

“Consider the facts: The oil will be pumped, and the money will flow — but to whom?”