A Stanford University professor who sued his critics and the journal that debunked his research overstating job benefits from a switch to 100-percent renewables was rebuffed by a D.C. judge over his dubious defamation lawsuit.

After reviewing more than two years’ worth of filings in Mark Jacobson’s $10 million lawsuit against the National Academy of Sciences and a group of fellow researchers, Superior Court Judge Elizabeth C. Wingo this week said “no jury, properly instructed on the law, could find the statements in this case are defamatory in light of the evidence” and ordered Jacobson to pay the defendants’ attorney fees.

Jacobson’s 2015 research was met with broad skepticism when it was first released – followed by criticism from scientists, environmental experts and climate activists – and eventually debunked by 21 researchers in a peer-reviewed paper published in PNAS in 2017. Those researchers found “significant shortcomings,” “errors, inappropriate methods, and implausible assumptions.” In response, Jacobson sued one of the researchers, Christopher Clack, and PNAS for defamation. He dropped the lawsuit in 2018 stating he had “no more reason to fight this battle.”

Jacobson’s research claims a swift transition to 100-percent renewables would create millions of jobs, offsetting those lost by shutting down fossil fuel and nuclear energy. EID’s own analysis of Jacobson’s data found that more than 3.8 million jobs would be permanently lost, which is far more than the nearly 2.6 million long-term jobs that he estimated would be created. 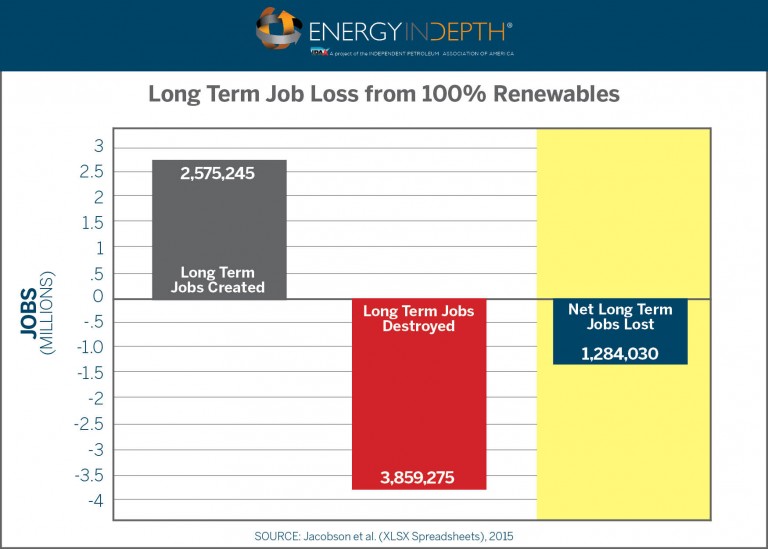 Nonetheless, this research has been used in support of numerous federal and state energy policies and touted by environmental activists for years.

Sen. Bernie Sanders has long been a supporter of Jacobson’s research. On Sanders’ 2016 campaign website,  Bill McKibben promoted Jacobson’s 50-state transition plan, which he said shows how states “could be easily and affordably producing all their power renewably by 2030.” Similarly, the senator’s most recent bid for the presidency included another aggressive strategy to quickly transition to a 100 percent renewable electricity sector.

In fact, in 2017 Sanders announced his proposed 100-percent clean energy bill in a Guardian opinion piece that he co-authored with Jacobson that called for “taking swift, aggressive action” and emphasized the millions of jobs that would be created from this transition.

“Perhaps it’s not surprising that Ocasio-Cortez, who campaigned for Bernie Sanders, has endorsed the same all-renewable agenda that Sanders pushed in his failed bid for the White House. What is surprising is that for all her apparent political savvy, she didn’t bother to see if such a scheme is workable or affordable. It isn’t.”

Given this, it’s unsurprising that Jacobson has repeatedly touted AOC’s proposed GND strategy: 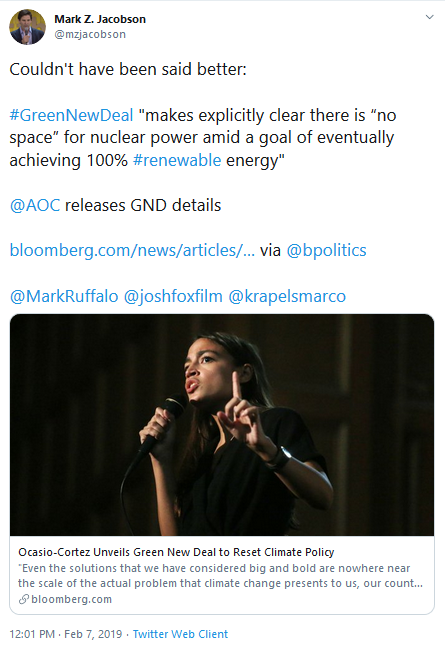 Despite New York increasing natural gas consumption by nearly 64 percent from 2005 to 2017, Gov. Andrew Cuomo released one of the most aggressive state plans for transitioning to 100 percent renewable electricity. The announcement came six years after Jacobson conducted an analysis on the state where he claimed:

“Converting to wind, water and sunlight is feasible, will stabilize costs of energy and will produce jobs while reducing health and climate damage.”

“In Polis’ ‘white paper’ on renewables, he claims it will ‘save consumers 10 percent on energy costs,’ citing data from the Solutions Project. That’s the brainchild of actor Mark Ruffalo and Josh Fox, the anti-fracking filmmaker who regaled viewers with phony claims regarding the cause of a fiery faucet in Weld County, among other falsehoods. They recruited the technical expertise of Stanford scientist Mark Jacobson, who happens to be lead author of the same 2015 study on renewable energy that turns out to be fundamentally flawed. Are Jacobson-inspired estimates of consumer savings and job creation for the Solutions Project likely to be any more credible?”

Polis last year announced his official plan for the state to rely 100 percent on renewable energy by 2040.

The use of Jacobson’s research in making these arguments has continued. For example, Sierra Club published an article in March 2019 quoting Jacobson as an “energy expert.” Similarly, Rolling Stone – which has published several attack pieces against oil and natural gas in recent years – used Jacobson as an expert on the feasibility of the Green New Deal this month.

As Judge Wingo found, there is nothing defamatory in the critiques of Jacobson’s research. They simply explain the many flaws in his job creation estimates, including that the aggressive strategies he promotes would cost millions of jobs. One has to wonder if this latest development will result in more thoughtful analysis of the unrealistic plans that were influenced by this flawed research.

The entire energy sector is evaluating its operations and implementing emissions-reducing strategies, while also maintaining a robust, diverse grid that ensures reliability and affordability. How that looks in the future needs to be based on sound science and realistic transition strategies.