Ohio groups with ties to the Keep-It-In-The-Ground movement recently called on the Bureau of Land Management (BLM) to hold more public hearings and extend the time period for public comment in response to BLM’s decision to move forward with leasing in the Wayne National Forest (WNF).

This could not be more ironic considering that these same groups were previously so disruptive at the last public hearing that BLM was forced to shut the meeting down early, negating the entire purpose for public input, and hijacking others from having the opportunity to engage. 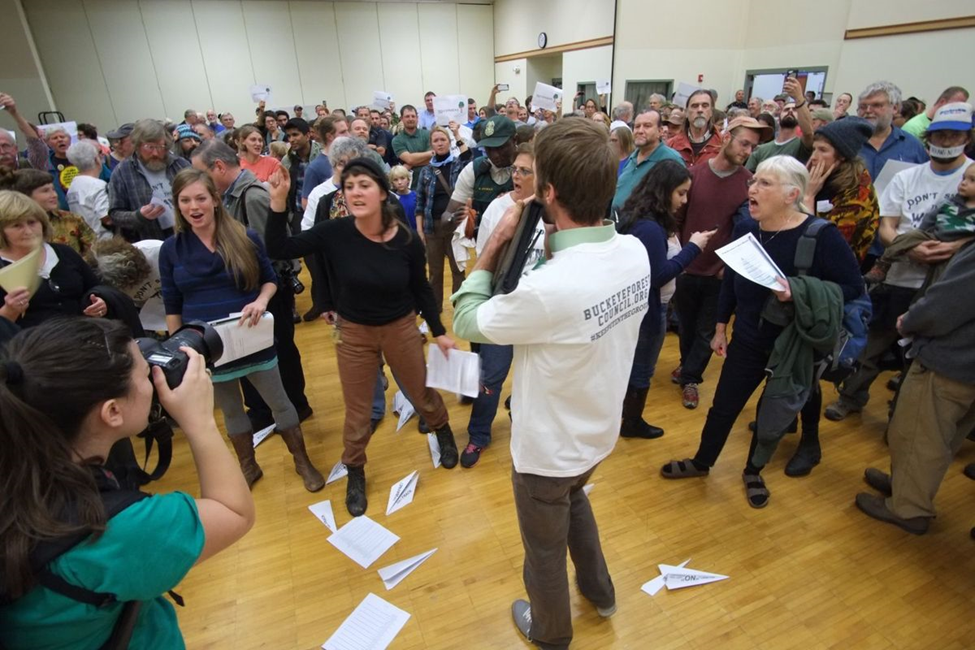 Activists throw paper airplanes at BLM representatives during a public meeting earlier this year resulting in the meeting being shut down early.

Why follow the rules when protesting gets the media’s attention?

After hosting not one, not two, but three public hearings, and extending the formal public comment period, the BLM recently released its draft Environmental Assessment (EA), which determined the merits of leasing federal minerals under the WNF.  This 113-page comprehensive document included a National Environmental Protection Act (NEPA) analysis, and assessed the immediate impacts to the forest, as well as potential for long-term impacts, such as potential climate change from oil and natural gas development. The comprehensive assessment by the BLM found that there would be no “significant impact” to the environment to lease federal mineral for the purpose of oil and natural gas development, allowing the process to move forward. As usual, activists immediately cried foul stating the EA is “gobbledegook”, while at the same time arguing that going through the 113-page comprehensive EA is just too time consuming.

“We also can’t expect everyone to read the confusing documents and make any sense of them by themselves. We need a public hearing so that the public can share its extensive knowledge of the issues and our various attempts at understanding these confusing and consequential documents with one another, our community, and with our elected officials. We must then have time to write meaningful comments.”

Interestingly, after claiming she “spent eight hours” reading the EA and still can’t “decipher it”, these groups somehow had plenty of time to pull together a media stunt outside of the WNF which included “holding a bag of barnyard manure which they likened to a draft Environmental Assessment in support of the leasing plan.”  They called the media to take pictures of the spectacle, and then sent out this press release complaining about how they were not given enough time to get their act together and provide meaningful public comment. 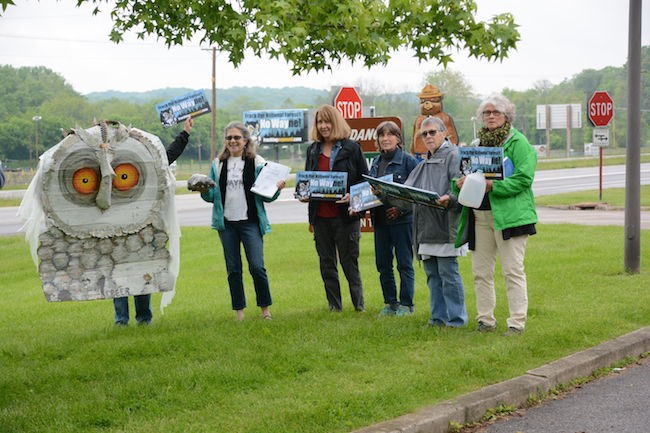 Photo and Caption by Dennis Powell of Athens News shows protestors outside of a federal building at the Wayne National Forest, “holding a bag of barnyard manure which they likened to a draft Environmental Assessment in support of the leasing plan.”

Crying foul and calling for more public hearings and comment are certainly not new tactics used by anti-fracking groups, and particularly the Keep-It-In-The-Ground groups in Athens, Ohio. In fact, if this most recent stunt seems like de ja vu, it is.

Back in November, EID pointed out that over five years ago this entire matter was debated through a public forum. The BLM hosted several meetings and opportunities for public comment and involvement on drilling in the forest in 2011 and 2012. The meetings were part of the widespread environmental review of the forest plan, which included an extensive comment period. In fact, Heather Cantino, spokesperson for Athens County Fracking Action Network, offered up a letter of protest to the BLM on October 7, 2011 and attended one of these meetings back in September 2012. That meeting was hosted by the Ohio Environmental Protection Agency, the Ohio Department of Natural Resources, the Bureau of Land Management and the National Forest Service and it focused on the environmental review process to allow drilling in the Wayne National Forest. At that meeting (four years ago) Ms. Cantino said, “They haven’t been listening to us for the last six months. The (open house) is just a ploy to once again not listen to the community.”  Fast forward to 2015, and Ms. Cantino again questioned the public notice given to the community, which was advertised in the local paper, and has since been circulated through papers throughout Ohio, including the Columbus Dispatch. Regardless of Ms. Cantino’s claims, the NEPA Handbook, which is the guide the BLM uses for this process, clearly states:

In response, the BLM posted notice that they would in fact hold three public meetings and extend the formal public comment period. In response, and just six months ago, activists recycled five years of running talking points by stating, “You have greatly confused our community and thus not provided adequate notice for a meeting to be held in two weeks, for which you have NOT YET provided adequate public notice.”

Fast forward to 2016, verbatim, the same activists are rehashing their same tired arguments. According to a recent press release, the draft EA is too complicated and “confusing” for the public to read. This is statement absolutely incorrect. While the document is in fact comprehensive, it does not require an attorney to decode it. Perhaps Ms. Cantino and her friends should have used the time they spent putting together their most recent horse manure media stunt to actually read the document and submit public comment. This however, is far too much work for the activists – it’s much more fun to protest and put out press releases criticizing a federal agency.

One would think these groups would start at least having some originality to their strategy, as this same story continues to play out all across the country. Just like we are once again seeing in Ohio, KIITG groups “demand” more opportunities for public hearings and engagement and when they receive that opportunity they instead make a mockery out of the process, turning a hearing into a circus and a lengthy public comment period into nothing more than additional time to pull media stunts and churn out press releases.

These exploits prove that when sound science is not on your side, the activist have no choice but to revert to theatrics and emotional debates over the merits of oil and natural gas development. Hopefully the BLM will continue to make decisions regarding the Wayne National Forest based on science and listen to the interested parties who have actually taken the time to submit meaningful comments, discuss the process, and ask real questions about the pending draft Environmental Assessment over reckless activists who disregard civility and facts to achieve their agendas.