While some opponents of responsible energy production used a recent Department of Interior forum to call for a ban on all oil and natural gas development on federal lands, or to make the Biden administration’s pause on new leasing a permanent ban, Interior Secretary Deb Haaland began the event with an important acknowledgement:

“There is no doubt that oil, gas and coal energy from our public lands and the ocean has helped build our economy and power our nation. … Fossil fuels will continue to play a major role in America for years to come.”

The comment aligned with her confirmation hearing last month, when then-Rep. Haaland told the Senate Energy & Natural Resources Committee, “I know how important oil and gas revenues are to critical services,” and that the current moratorium isn’t permanent.

Although Haaland and the other Interior officials participating in the forum gave no specific end date for the leasing pause, there was continued reiteration that the executive order is not a permanent ban.

#1 Oil and gas development on federal lands and waters has major economic impacts.

Nada Culver, the acting chief of the Bureau of Land Management, which oversees the federal leasing program, reviewed the key revenue and jobs numbers (image below) from production on federal lands. 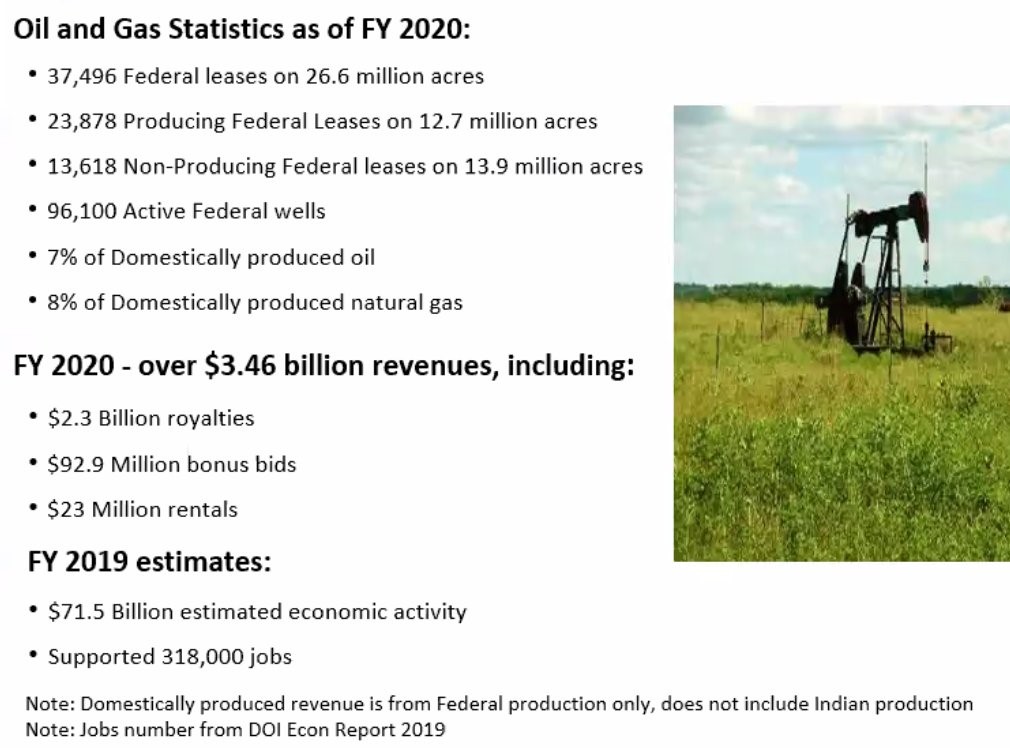 According to BLM, production on federal lands in FY2020 accounted for 7 percent of oil and 8 percent of natural gas produced in the United States, generating $3.46 billion in federal tax revenue. In FY2019, it contributed $71.5 billion in economic activity and supported 318,000 jobs. And that’s just the revenue and jobs onshore. As Bureau of Ocean Energy Management Director Amanda Lefton explained, in 2020 BOEM collected over $3 billion in revenue from outer continental shelf leases alone.

States like New Mexico and Wyoming count on this development to provide strong financial support for K-12 education, while Gulf states use royalty money for coastal restoration projects. Fawn Sharp, president of the National Congress of American Indians, called the development an important source of revenue for tribes across the country:

“Tribal energy reserves on Indian lands could generate up to $1 trillion for Tribal Nations and surrounding communities, most of which are located in rural areas. … These funds support tribal government services and individual citizens. They are also important to America’s efforts to achieve energy independence and security and promote economic development both inside and outside of Indian country.”

Nicole Borromeo of the Alaska Federation of Natives emphasized that no energy sector does more for Alaska’s Native families than oil and natural gas:

“By and large, Alaska Natives and the Assembly of First Nations support responsible natural resource development because it forms the foundation of Alaska’s economy.”

#2 Oil and gas development on federal lands and waters is a heavily regulated, complex, years-long process.

Presentations by Culver and Lefton explained the complexities of the regulatory process for oil and gas development, and just how long the development process takes. BLM’s authority comes from a half dozen federal laws ranging from the Mineral Leasing Act to the National Defense Authorization Act.

While BOEM’s authority largely falls under the Outer Continental Shelf Lands Act, Erik Milito, president of the National Ocean Industries Association, explained that offshore development is regulated by a multitude of agencies, dozens of statutes, permits and approvals, and nearly 100 regulatory sections. 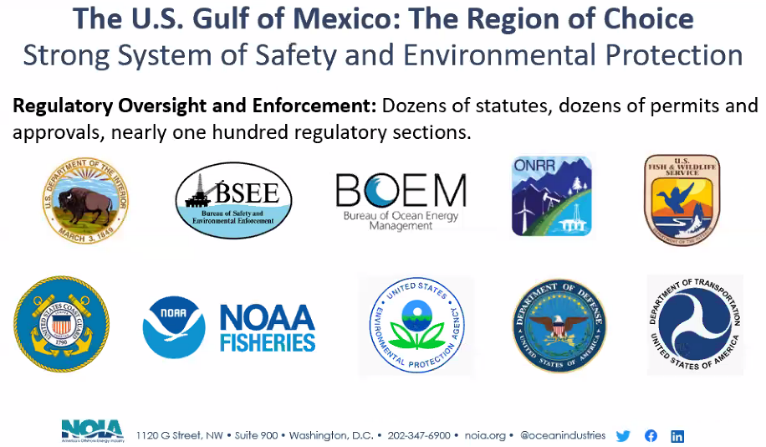 The presentations also clarified the often-misunderstood timeline of how long it takes before a well can actually be drilled.

If a company succeeds in acquiring a lease in a competitive bid sale, it must obtain a permit to drill, conduct another NEPA review, potentially conduct resource surveys and submit 12-point surface use plans and nine-point drilling plans.

#3 Various stakeholders need to be considered in any policy decisions impacting resource development on federal lands.

The importance of consultation echoed throughout the forum as a theme from both proponents and opponents of federal oil and gas development alike. The consultation process baked into regulatory timelines allows diverse communities to weigh in from the potential leasing steps to production,. As Borromeo explained:

“We want to make sure when the department consults with Alaska natives, it includes all Alaska natives, including our corporations…We don’t view this, like I said, as an either/or…We understand that the earth is changing, the climate is warming, all of that, but it needs to be a measured thought-out process. We’re very concerned that if we just turn the light switch off up here in Alaska and switch from oil and gas over to renewables, that our 200 plus native communities that are reliant on diesel generators, that are essentially on micro grids, they’re just not going to be able to step up fast enough for these renewable opportunities.”

She concluded with an offer for DOI to visit the lands where this development is occurring:

“Let us show you our lands. Don’t necessarily just rely on what private industry or environmental groups are saying. We want to be the ones to take you and to show you.”

A panel of labor leaders also emphasized the need to give unions and workers consideration when considering new policies. Sean McGarvey, president of North America’s Building Trades Union, explained that 50 percent of his federation’s members work in energy and that thousands of jobs would disappear without oil and natural gas production. He noted that “Keep It In The Ground” activists have already threatened those jobs and made permitting difficult to start project construction.

Wendy Kirchoff of the American Exploration & Production Council noted that oil and natural gas companies work hard to both create jobs and be good neighbors:

“Our companies are highly conscientious about working with and listening to the communities and the people in the places where we operate. … We often hear from families and businesses in these communities near federal #oilandgas development is that they depend upon the good paying jobs and local commerce the development brings.”

#4 The oil and gas industry is committed to working with the Biden administration and DOI to reduce emissions and safely develop federal resources.

“We also heard loud and clear that the oil and gas industry is committed to being a part of the climate solution.”

Thanks to innovation and constantly improving technology, oil and natural gas production is playing an increasingly important role in providing the energy America while actively developing solutions to address climate change.

NOIA’s Milito said companies are working together to reduce emissions and that production in the Gulf of Mexico supports coastal restoration projects with millions of dollars each year under the Gulf of Mexico Energy Security Act.

Kirchoff noted that production on federal lands is producing energy with clear environmental and economic benefits:

“According to a 2018 [United State Geological Survey] study, the extraction of oil and natural gas from federal lands accounts for 0.6 percent of the total U.S. greenhouse emissions – an intensity that is proportionately less than the economic value these activities provide.”

Frank Macchiarola of the American Petroleum Institute said his organization supports the president’s goal of fighting climate change, but that reducing production on federal lands will increase oil imports, possibly from countries with less stringent environmental standards, while Wendell Hibdon of the United Association of Plumbers and Pipefitters said that banning oil and natural gas production would only create job overseas that produce the energy America needs:

“I mean, all we’re going to be doing is shipping jobs overseas and having them send petroleum back, we can’t afford to do that. What we’re saying is good paying jobs for Americans should be considered with any type of climate plan.”