UPDATE (8/6/2013; 11:37am ET): Drip, drip, drip. The more details we discover about this “EPA PowerPoint,” the more puzzling the whole story becomes. The anti-natural gas crowd is of course salivating over what they think it proves about Dimock, but the facts (still) don’t support them.

The anti-industry website “DeSmogBlog” recently published the PowerPoint at the center of all this manufactured hysteria. Naturally, DeSmog did not publish the mountain of other data collected by EPA, which also informed their final conclusion that no additional action was necessary in Dimock. According to DeSmog’s characterization, the presentation was released internally before EPA’s final assessment in July 2012. Thus, it’s reasonable to conclude that the “leaked PowerPoint” was simply an outlier opinion amongst countless other data that were incorporated into EPA’s final determination. It was nothing more than the un-reviewed conclusion of “a single staffer,” according to the EPA itself, in an agency that employs thousands of people.

Even worse, the entire storyline was orchestrated behind the scenes by the aggressively anti-fracking Natural Resources Defense Council, an organization that ironically screams from the rooftops about issues such as disclosure. The PDF of the “leaked” presentation, posted by DeSmog, links it directly to an NRDC staffer: 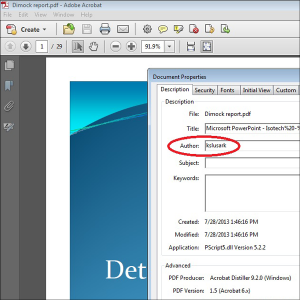 The username on the document is “kslusark,” a handle for Kate Slusark (now Kate Slusark Kiely), a media staffer in the NRDC’s New York City office. That explains why the NRDC is given a forum in the early paragraphs of both the L.A. Times and Bloomberg News stories. The NRDC staffer quoted in those stories is Kate Sindig – for whom Ms. Slusark serves as press contact. Sindig also blogged about the L.A. Times story shortly after its publication, and in a style that suggested she was just reporting on news. She never once disclosed the NRDC’s role in that L.A. Times story running in the first place!

You got to hand it to the NRDC: They certainly know how to manufacture a story.

The Washington, DC, bureau of the Los Angeles Times re-opened the Dimock, Pa., case this weekend with a 1,200-word story, a piece premised almost entirely on a Power Point presentation from 2012. The document was, according to the EPA, a preliminary opinion of a single EPA staffer about water quality in Susquehanna County. That the EPA confirmed this directly to the Times, and pointed out that this “evidence” was contradicted by the full weight of EPA’s investigation, apparently didn’t matter; the story still ran in its entirety.

The Times’ report also failed to describe accurately a variety of cases and details about EPA’s chronic missteps on hydraulic fracturing. A discerning reader would no doubt be left to wonder: How, exactly, does this single opinion of Dimock (and a series of incomplete portrayals of events) provide a legitimate reason to suspect EPA’s conclusions were flawed, much less warrant rehashing a case from which the public has largely moved on?

Let’s dig deeper into just a few of the Times’ troubling oversights.

FACT: This is the caption for an image of a natural gas rig located at the beginning of the story. As anyone who has spent more than thirty seconds researching what “fracking” is and is not could tell you, if you see a drilling rig, hydraulic fracturing is not occurring. As such, describing it as a “fracking operation” is 100 percent false. An actual “fracking operation” looks like this.

LAT: “In March 2012, the EPA closed an investigation of methane in drinking water in Parker County, Texas, although the geologist hired by the regulator confirmed that the methane was from gas production.”

FACT: The geologist described here – Geoffrey Thyne – did not “confirm” a link to gas production. Did his analysis suggest it could be possible? Yes (the Associated Press, which broke the story about Thyne’s report, said it only suggested drilling “could have” been the source of methane in drinking water). Did separate geochemical testing – presented directly to state regulators, and which the EPA deliberately chose to ignore – show nearby gas drilling was not the cause? Yes, although the Times for some reason completely left that out — along with a few other inconvenient facts, such as Thyne’s previous affiliation with anti-drilling groups (i.e. Earthworks) and the fact that even state regulators in Colorado have criticized his prior work.

The Times’ source for claiming Thyne “confirmed” gas production was the culprit is a July piece from ProPublica (the Times did not mention its source in the story, though). That ProPublica story, not for nothing, bears a striking resemblance in organization and the one in the Times: a summary of EPA’s investigations of hydraulic fracturing to date, followed immediately by an “outraged” quote from the Natural Resources Defense Council.

LAT: “In late June, the EPA dropped a study of possible contamination of drinking water in Pavillion, Wyo., despite its earlier findings of carcinogens, hydrocarbons and other contaminants in the water.”

FACT: Once again, what the Times left out here is absolutely critical for understanding the situation. After the release of the EPA’s preliminary findings in a draft report, state regulators criticized EPA’s methods, criticism that was bolstered by the Bureau of Land Management, which oversees oil and gas production on federal lands. The BLM said flat out that EPA’s testing procedures could have introduced “bias” into its samples, the same ones that the Times described as being linked to gas drilling. Later, a U.S. Geological Survey report registered at least 50 different measurements from EPA’s findings, including an effective disqualification of one of only two monitoring wells used by EPA.

The bottom line is that, if the EPA believed its preliminary conclusions were credible, it would have proceeded with peer-review. Instead, the EPA said it “does not plan to finalize or seek peer review…[n]or does the agency plan to rely upon the conclusions in the draft report.” The investigation continues, of course, but it will be led by experts whose methods in Pavillion have not been questioned by multiple state and federal agencies.

LAT: “‘This presentation represents one [on-scene coordinator’s] thoughts regarding 12 samples and was not shared with the public because it was a preliminary evaluation that requires additional assessment in order to ascertain its quality and validity,’ said EPA spokeswoman Alisha Johnson. ‘The sampling and an evaluation of the particular circumstances at each home did not indicate levels of contaminants that would give EPA reason to take further action,’ Johnson said.”

FACT: Let’s back up here. You’re a reporter for a major newspaper, and someone (we don’t know who, the Times never says) sends you a Power Point presentation of a lone EPA official who has his or her own unique theory about a high-profile investigation. You ask the EPA about it, which (1) validates its authenticity as being the opinion of a single EPA employee, (2) says that it was only a “preliminary” assessment, and (3) explains how EPA’s full evaluation nonetheless showed no need for additional action. Instead of recognizing that this Power Point presentation was an outlier, and that this work was incorporated into the EPA’s broader conversations about Dimock (why else would the EPA acknowledge it if they weren’t aware of it?), the Times tried to manufacture another narrative about opinions being squashed.

As it turns out, scientific investigations with multiple team members will almost always include differing opinions. Just because one staffer’s opinion isn’t what the full investigation reveals doesn’t suggest malfeasance; it just suggests that particular opinion was more than outweighed by others in the agency who determined the opposite.

LAT: “‘What’s surprising is to see this data set and then to see EPA walk away from Dimock,’ Jackson said. ‘The issue here is, why wasn’t EPA interested in following up on this to understand it better?’ The EPA staff presentation about Dimock was an interim analysis of water sampling data collected by Pennsylvania regulators and, later, by the EPA, from 2008 to June 2012.”

FACT: It’s clear that the Times is interested in understanding the background of EPA’s involvement and actions in Dimock. That’s why it’s so odd that they didn’t even find it relevant that EPA’s analysis of data from the Pennsylvania Department of Environmental Protection (DEP) in 2011 suggested no basis on which the agency should take action. In November 2011, EPA’s groundwater chief for Region 3 emailed DEP and said the agency had “been going through the data,” adding that “even the ‘outside’ analytical services agree with range of sampling already done just fine.”

One month later, EPA emailed Dimock residents and said, “the data does not indicate that the well water presents an immediate health threat to users.”

Four days later, Gasland director Josh Fox sent a letter to the EPA saying the agency had somehow “failed,” adding: “Please Intervene in Dimock!” Within a matter of just weeks, and with no new data beyond what they had already examined and determined did not pose a threat, EPA announced it would indeed intervene in Dimock.

So, the entire basis of EPA’s involvement in Dimock wasn’t even based on hard data, and in fact the EPA said flat out that the data (including outside analysis) showed no need for the EPA to involve itself. Yet they did intervene after Josh Fox told them to.

Where’s the story on EPA’s basis for involving itself in Dimock in the first place – a situation where it determined both before and after its (baseless) investigation that the available data showed no need for further action? Isn’t that newsworthy, or at least relevant?

LAT: “Although methane gas occurs naturally in the area’s aquifers, the Duke study showed that the chemical ‘fingerprint’ of methane in shallow water wells near the gas sites was the same as the natural gas extracted from deep underground.” Jackson is later paraphrased as having said “that the methane found does not naturally occur in drinking water.”

FACT: Conveniently, the Times only references a study that appears to confirm the narrative it has already manufactured — and none of the ones that tell a completely different story. To wit: one week before that Duke study was released, the U.S. Geological Survey released a report that found that same chemical “fingerprint” of methane in northeastern Pennsylvania water wells before drilling ever began. How could that methane get there if it had to be the result of drilling? The Times doesn’t say. Would this be useful information for the public in order to facilitate a fact-based assessment of cause and effect? Of course it would.

A separate, peer-reviewed report from earlier this summer also confirmed that naturally occurring methane is “ubiquitous” in northeastern Pennsylvania groundwater – which, as you might guess by now, was also categorically ignored by the Times.

Hopefully the next intrepid journalist who wants to report on Dimock and EPA’s other missteps with respect to hydraulic fracturing will at least include the mountain of evidence that led EPA to withdraw in each case, rather than determining the arc of the story before the research even begins.