UPDATE (4/21/2014; 4:00pm ET): While there’s no debating shale development is creating hundreds of thousands of jobs across the United States, some have questioned whether locals or out of state workers are receiving those jobs. A recent article from the Associated Press shows a large shift to hiring local contractors that use labor unions in areas of development.

“The shale became a lifesaver and a lifeline for a lot of working families,” said Dennis Martire, the mid-Atlantic regional manager for the Laborers’ International Union, or LIUNA, which represents workers in numerous construction trades.

Martire said that as huge quantities of natural gas were extracted from the vast shale reserves over the last five years, union work on large pipeline jobs in Pennsylvania and West Virginia has increased significantly. In 2008, LIUNA members worked about 400,000 hours on such jobs; by 2012, that had risen to 5.7 million hours.”

Vocational and community colleges in states with shale development are providing the right education and training for people to work in the oil and gas industry.  Being equipped with the right training affords local residents more opportunities to secure the well-paying jobs the industry has to offer. As local schools continue expanding their offerings in this field, we can expect additional opportunities for local men and women throughout the supply chain.

The latest U.S. Bureau of Labor Statistics report shows the Marcellus Shale has created 15,114 direct jobs in Pennsylvania, marking an amazing 259.3 percent increase since 2007. While some believe this number should be higher, it’s important to note that these are only direct jobs.  According to the Bureau of Labor Statistics’ Quarterly Census of Employment and Wages report, direct jobs were only defined as the following:

This report doesn’t take into account the many other jobs it takes to bring a well online, as well as the induced jobs that have been created thanks to Marcellus development.  For example, according to a Manhattan Institute report:

“For every direct oil and gas job, there are, on average, three jobs created in industries such as housing, retail, education, health care, food services, manufacturing, and construction.”

Put simply, using a factor of three spinoff jobs per every direct job in the industry means Marcellus Shale development has created or induced an additional 45,342 jobs in Pennsylvania since 2007.

Take a look at Hog Fathers Old Fashioned BBQ, a local restaurant that started back in 2007 when the economic benefits of shale development were only being pondered.  This once small restaurant has now expanded to five new locations and grew its work force from 10 employees to 85 – a 750 percent increase – thanks in no small part to shale development in the region. Owner Frank Puskarich had this to say:

“Between 60 and 65 percent of Hog father’s business comes from carry-out and catering jobs, and the majority of that business is directly tied to the natural gas industry. If it wasn’t for gas, I’d probably still be sitting or one or two stores, wondering how to get the next one open.”

Pennsylvania is not the only state seeing this type of economic and job growth, either.  Every state with shale development across the nation is outpacing the national average in terms job growth. 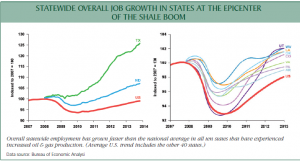 Between 2007 and 2012, here’s how four major shale producing states have fared in terms of employment growth:

Shale development across the country continues to grow, is becoming more efficient, and is yielding substantial increases in U.S. energy production – with no sight of slowing down.  This means that job and economic growth in areas of shale development will continue to increase and give well-paying jobs to hardworking Americans for decades to come.