New England – and more specifically Boston – has been making headlines over the last few weeks, and not just because of the upcoming Super Bowl. That’s because in the land of the ‘Patriots,’ despite an abundance of natural gas being produced in the United States, heating and electricity needs this winter are being met from an unlikely source: Russia.

A tanker of liquified natural gas (LNG) carrying Russian gas arrived earlier this week and another is already on the way. But how did this happen when New England is literally a mere hop skip and a jump away from ample natural gas resources in Pennsylvania’s Marcellus Shale? The Houston Chronicle summed it up quite nicely:

“Your average Texas driller is probably left scratching his head. Domestic crude production is on path to the record set in 1970 – around 10 million barrels – and natural gas is following right behind. There’s little reason to go looking across the ocean for petroleum.

“Just one problem: All that gas can’t get to the people who need it because New England simply never built enough pipelines.” (emphasis added)

Jordan McGillis, a policy analyst at the Institute for Energy Research, recently explained this in more detail:

It doesn’t matter that the nearby Appalachian Basin, which is home to both the Marcellus and Utica shales, produces over 26 billion cubic feet of natural gas per day (Bcf/d), representing 42 percent of total U.S. natural gas production. That gas cannot get to New England where it is desperately needed without building new pipelines. 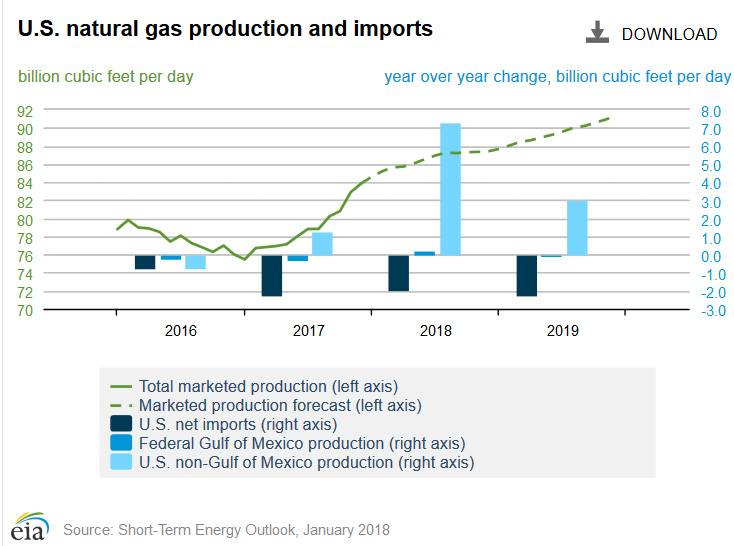 In a twist of irony, the Energy Information Administration actually credits this tremendous production growth in the Appalachian Basin to “increasing pipeline takeaway capacity out of the Appalachia producing region to end-use markets.”

Unfortunately for New Englanders, they don’t live in one of those end-use markets, thanks to regional policies that make building new infrastructure next to impossible and because of the natural gas blockade Gov. Andrew Cuomo has set up in New York, blocking proposed infrastructure projects that would bring natural gas to both his state and his neighbors to the north in New England. As Forbes contributor David Blackmon recently said:

“See, it’s impossible for any company to construct a pipeline to move natural gas from the Marcellus region to New England without going through New York, which forms a land barrier between the two regions.”

McGillis explains that “the hostility to pipelines is so pervasive in the northeast that ISO New England, the regional electric grid operator, takes that bleak view that ‘no new incremental gas infrastructure will be built to serve power generation.’”

To its credit, ISO New England has been warning that the situation in New England this winter is a dire one.  As McGillis notes,

“On Jan. 23, ISO New England CEO Gordon van Welie testified before the Senate Energy and Natural Resources Committee that, ‘when it gets cold the region does not have sufficient gas infrastructure to meet demand for both home heating and power generation.’ It is a theme van Welie has conveyed since at least 2013. The pipeline constraints to which he points have at times caused New England to have the most expensive spot natural gas prices in the world — including this January.” (emphasis added)

So where does that leave New Englanders?

This certainly doesn’t leave New Englanders in a good place on multiple levels. In addition to the possibility of blackouts, a region that prides itself on embracing “cleaner” energy sources is burning higher-emitting fuel sources this year because the supply constraints for natural gas have led to the region paying the highest prices in the world for the resource. In early January, ISO New England’s fuel mix went from using less than one percent oil to more than 25 percent for electricity generation. 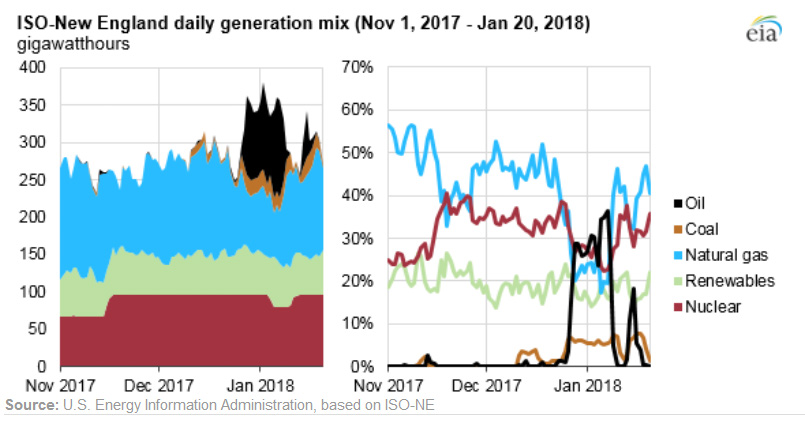 And in order to get back to its more usual fuel mix, the region is now looking to oversee markets — including Russia for LNG — to make up for the deficit. What’s more, ISO New England forecasts that without new pipeline infrastructure, the situation is only going to get worse. As McGillis explains,

“Given the positive developments that have left markets awash with energy resources, one would expect American utility companies would be well-positioned to meet the needs of their customers. Instead we are now being warned by ISO New England that in future winters utilities will be unable to meet demand during bouts of frigid weather. The group’s projections in almost every future scenario forecast the implementation of rolling blackouts — the sequential disconnection of blocks of customers from power — to protect the grid from outright disaster.” (emphasis added)

Pipelines are subject to a rigorous approval processes before they are built. Teams of experts analyze everything from the actual demand an end-use market has for the resource the pipelines will carry, to environmental and economic impacts. They must find the paths with the least impact, while navigating negotiations with private landowners and local, state and federal governments.

It is a process that takes years before the first shovel removes any dirt, and of late, is taking even longer, as activists intent on stopping the development of oil and gas throw irrational roadblocks, or in the case of New York, unrealistic expectations that ultimately result in costly delays and even cancellations of projects.

As the Houston Chronicle recently said,

“Maybe some battery-storage breakthrough will soon allow renewable energy to dominate the grid. But until then, America is producing a bounty of petroleum products and there’s little reason for New England to miss out.

“If our politicians keep standing in the way of pipeline projects, you can bet that Putin will be the one saying ‘Thank you.’”

At the end of the day companies may lose money on delays, but it is those in New England who are feeling the worst effects of delayed infrastructure. If ISO New England’s forecasts are accurate, this winter is only the beginning of the region’s increased reliance on foreign fuel at a time when the rest of the country continues to decrease its natural gas imports.