Researchers at Duke University recently released a study that looks at the consumption of water from 2009 to 2012 in Pennsylvania as shale development increased and the state was just beginning to transition to more natural gas-fired power generation. The study argues that “during the early stages of Pennsylvania’s coal-to-gas transition, production and generation of coal and natural gas contributed to a yearly 2.6–8.4% increase in the state’s water consumption.”

But that argument doesn’t exactly hold water. Before we get into the reasons why, it’s worth noting that the authors of the report took the time to acknowledge assistance from John Rogers of the anti-fossil fuel group, Union of Concerned Scientists (UCS):

“The authors thank John Rogers of the Union of Concerned Scientists (UCS) for useful conversations and suggestions in the early phases of this project and for providing access to the UCS database on cooling technologies in U.S. power plants.”

UCS is the same organization that praised New York’s decision to ban fracking as “a great example of science trumping politics” and has a number of fracking “toolkits” that are littered with misinformation on its website. That the researchers consulted UCS data is troubling to say the least.

Against that backdrop here are the top four facts to know:

Several recent studies have shown that as natural gas production has increased, water use overall has plummeted, because electricity from natural gas generation requires so much less water than other energy sources.

“Although water use for gas production is controversial, these data show that water saved by using natural gas combined cycle plants relative to coal steam turbine plants is 25–50 times greater than the amount of water used in hydraulic fracturing to extract the gas.”

“The bottom line is that hydraulic fracturing, by boosting natural gas production and moving the state from water-intensive … technologies, makes our electric power system more drought-resilient.”

A report by the environmental group, Climate Central, came to a similar conclusion, noting that as more natural gas power plants came online, water withdrawals in areas across the country declined:

“Water withdrawals for power generation dropped by more than 1.5 trillion gallons per year in Ohio, New York, and Illinois; 10 states had decreases of 1 trillion gallons or more. Electricity generated from natural gas increased 370 percent on average in those 10 states, with the largest absolute increases coming in Alabama and New York.”

Fact #2: Hydraulic fracturing accounts for less than one percent of total water use in Pennsylvania and across the United States

Study after study has shown that hydraulic fracturing accounts for less than 1 percent of overall water use both in individual states and across the county. In Colorado, oil and gas development accounts for 0.1 percent of the state’s total water demand; in Pennsylvania it’s less than 0.2 percent; in Texas, one of the highest water users, it’s still well under one percent.

Interestingly, a recent study by researchers from Duke University acknowledges this noting,

The U.S Environmental Protection Agency (EPA) also highlighted the low percentage of water use for hydraulic fracturing in its landmark draft water study. From that report:

“Cumulatively, hydraulic fracturing uses and consumes billions of gallons of water each year in the United States, but at the national or state scale, it is a relatively small user (and consumer) of water compared to total water use and consumption.” (emphasis added)

That’s not all. A report from the U.S. Government Accountability Office (GAO), also found overall water usage to be less than one percent of total U.S. water withdrawals. GAO attributed this to new technologies like,

“the use of waterless and water-efficient fracturing fluids such as those utilizing liquefied petroleum gas (LPG) and foams, and the technique of channel fracturing, which has been shown to improve operational efficiency while reducing material cost and water usage in selected formations” (p. 19)

“[F]racking to produce gas typically requires 3 to 5 million gallons of water per fracked well, and significant concerns have been raised about local environmental impacts of fracking fluids that are a mix of water and chemicals. However, in terms of water quantity, fracking consumes a relatively insignificant volume of water…” (emphasis added)

As 2015 Pittsburgh Post-Gazette article noted, Pennsylvania’s water use for hydraulic fracturing pales in comparison to other industries:

“According to a 2012 report from global consulting firm Accenture, while the amount of water used for shale development is large, it’s relatively lower compared to other sectors, such as agriculture. Pennsylvania’s annual total water consumption is about 3.6 trillion gallons, according to Accenture.” (emphasis added)

A very telling aspect of the study is its time frame. The researchers chose to focus on the years in Pennsylvania when shale production was significantly ramping up and power plants were only in the very early stages of transitioning to natural gas (from 2009 to 2012).

What’s interesting is that the authors of the report even admit,

“If coal-fired plants continue to transition to natural gas-fired plants, the coal-to-gas transition could result in a net decrease in overall water consumption within Pennsylvania.” (page 26, emphasis added)

Conversion to natural gas-fired power plants would also have local impacts, as the authors also acknowledge,

“For example, sub-basins with increasing shale gas extraction activity could experience water consumption increases if, for instance, coal plants are unlikely to be retired. In other cases, water consumption may decrease if old coal plants are shut down and (perhaps) replaced by gas plants in the same or another sub-basin.” (page 27, emphasis added)

But an increase in natural gas electricity generation in Pennsylvania is exactly what’s been happening. In the Northeastern part of the state in the Susquehanna River Basin, natural gas-fired power plants are being built or proposed in Bradford, Lycoming, Lackawanna, and Luzerne Counties, and Snyder County is slated for the biggest coal to natural gas conversions in the country. Recently the Scranton Times Tribune even said:

“Hydraulic fracturing in the Marcellus Shale in Pennsylvania has turned U.S. gas markets upside down. Now, that seismic shift is spreading to the electric power industry and Northeast Pennsylvania is the epicenter of that change.”

The study does provide a short section on page 12 to account for water recycling, which is the practice of using water produced from previous wells and treated in some manner to hydraulically fracture a new well. The study uses Pennsylvania Department of Environmental Protection (DEP) calculations for 2012 that estimated that recycled water was being used in about 13 percent of hydraulically fractured wells.

But what the authors don’t include is the fact that in the years since 2012, those numbers have changed significantly thanks to improved technology and best management practices. In fact, in 2013, the Pittsburgh Tribune-Review reported:

A 2015 DEP presentation looked at data from 2014. This presentation goes a step further to include not only the amount of recycled water now used in Pennsylvania, but also water that is directly re-used. It also shows these two methods being used from drilling fluids, hydraulic fracturing wastewater and produced water as the following charts demonstrate. 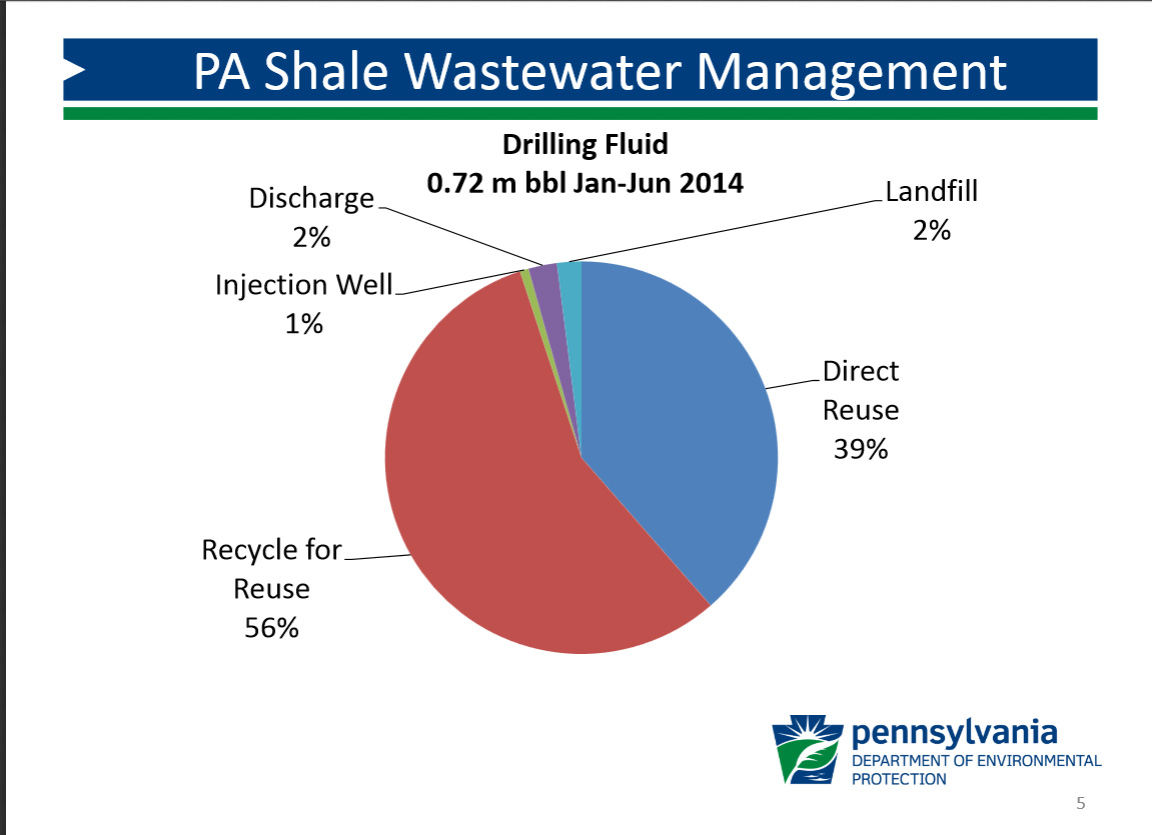 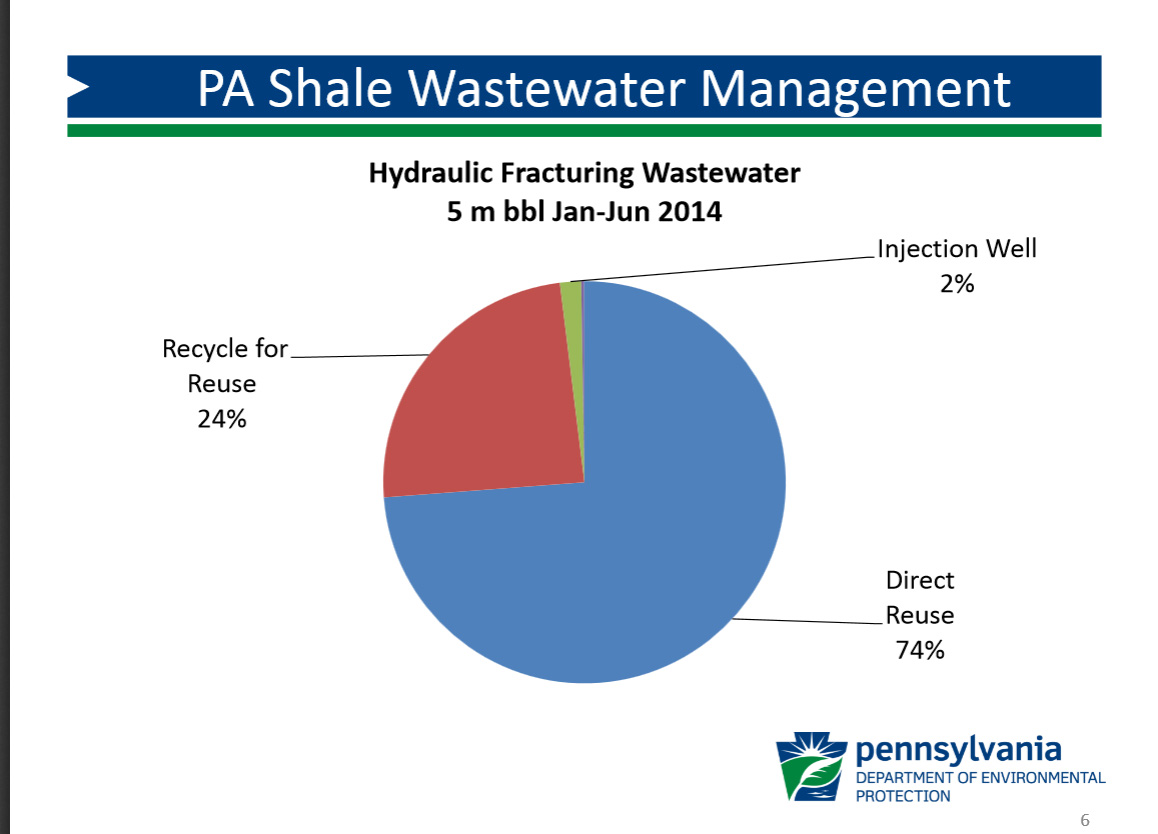 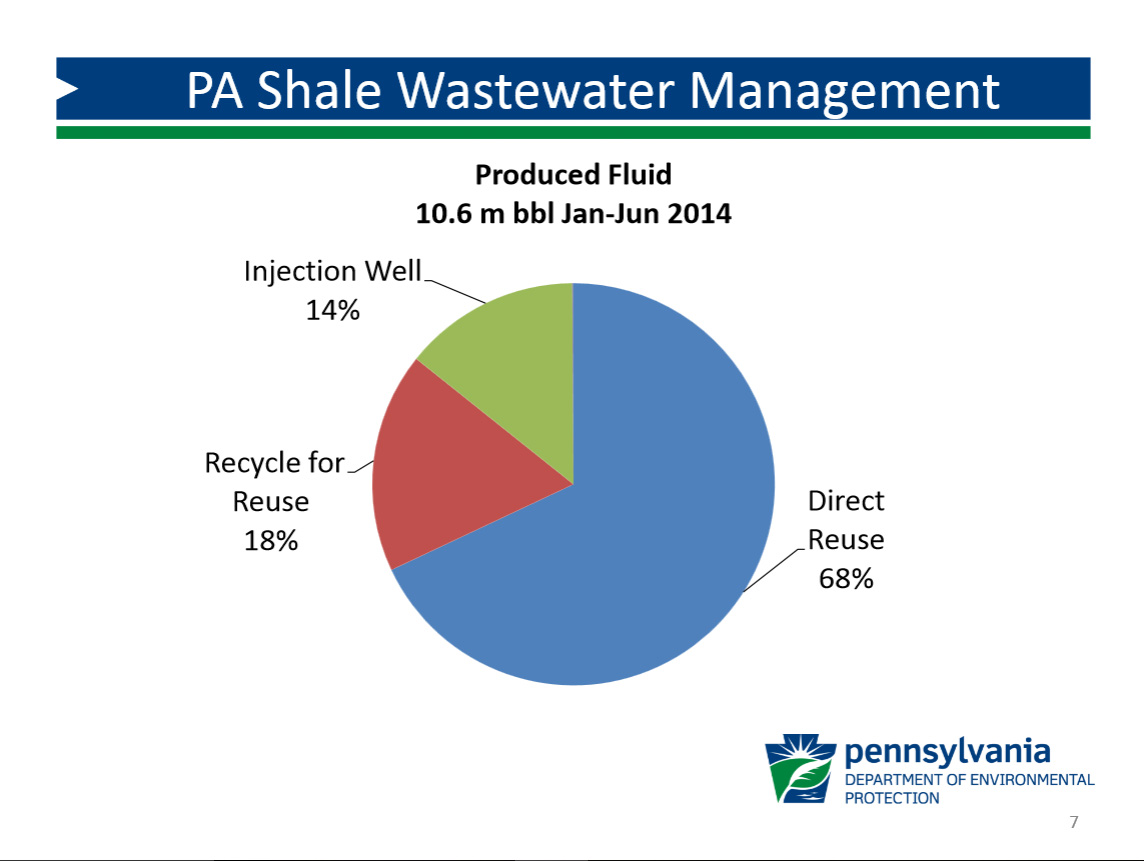 The Duke researchers acknowledge an increase such as this could be helpful in their discussion, yet never mention that it actually is occurring,

“Shale operators, utilities, and governments can and do play a role in actively mitigating impacts to water resources in the coal-to-gas transition. Shale operators can increase water reuse, technology innovation (e.g. propane gel fracturing), use of water sources other than surface water when appropriate and modify the timing of water withdrawals from watersheds.” (page 27, emphasis added)

The bottom line is that its abundantly clear that hydraulic fracturing is helping to reduce our water footprint because natural gas electricity generation uses so much less water than other fuels. Further, the water used in hydraulic fracturing accounts for well under one percent of the United States – and Pennsylvania’s – total water use. And that percentage only continues to decline as producers continue to ramp up water reuse and recycling.

Alarmist reports that do not include important context fail to provide the public with the information needed to understand the real impacts of shale development. Once again, researchers at Duke missed the mark.