While environmental activists like Wild Virginia celebrate the 4th U.S. Circuit Court of Appeals decision to revoke a permit for Mountain Valley Pipeline, the Appalachian Basin and the United States are currently facing the consequences of delaying this critical energy project. Further delays will only hamper U.S. economic growth and energy security, and will could send energy costs higher for consumers.

“Consumers, manufacturers and communities benefit from the reliable access to clean, domestically-produced natural gas that projects like MVP will provide.

“When projects, such as [the Mountain Valley Pipeline], are delayed, shippers and ultimately consumers will be forced to bear higher energy costs and less reliable service until sufficient energy infrastructure is constructed.”

The 304-mile project, which was first proposed in 2014 and is now roughly 94 percent complete, would connect some of the least carbon-intensive basins in the United States to other pipelines in the region. However, the project continues to face permitting issues for a roughly 3.5-mile section of the pipeline going through Jefferson National Forest in Virginia. 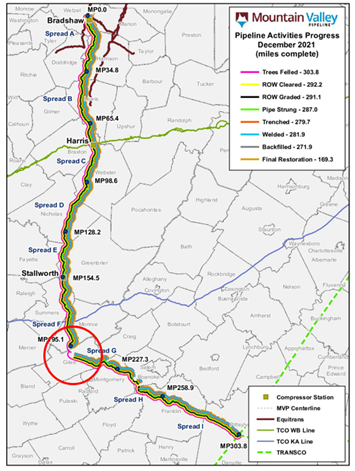 This is now the second time since 2018 the 4th U.S. Circuit Court has revoked a permit, saying the Forest Service and Bureau of Land Management did not do enough to consider sedimentation and erosion impacts in environmental impact statements.

The project has faced several delays pushing back its anticipated date to come online from 2018 to the summer of 2022, which is also now unlikely, according to Rob Rains, a senior energy analyst with Washington Analysis LLC.

The Appalachian Basin is not new to pipeline delays and opposition that has left projects like the Atlantic Coast, PennEast and Constitution pipelines canceled, negatively impacting the region. Similar to the Mountain Valley Pipeline, environmental groups, such as the Sierra Club and National Resources Defense Council, applauded the cancelations of these projects without considering the significant benefits they would have had supporting communities and the region. These two groups have both recently been vocal about opposing Mountain Valley, as well. 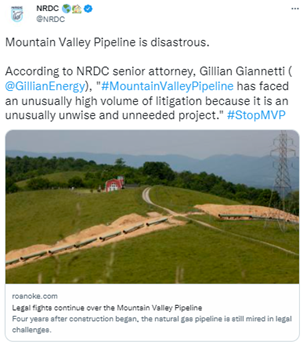 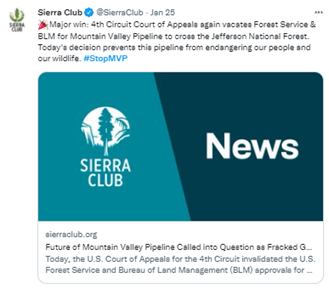 As energy prices rise, pipelines are the safest mode of transportation to ensure an adequate energy across the country, according to the U.S. Department of Transportation data. The Appalachian Basin has one of the lowest carbon intensities in the world, and with more companies committing to responsibly sourced natural gas and net-zero plans, emissions will only continue to decrease.

Efforts by organizations like Wild Virginia, Sierra Club, and the National Resource Defense Council to delay and halt critical infrastructure projects have made the Northeast experience a constrained supply of natural gas, resulting in higher costs for residents, businesses, and industries.

Despite facing numerous setbacks from ‘Keep It In the Ground’ activists, Mountain Valley Pipeline has created 5,250 jobs and once complete, will provide an additional 34 permanent jobs for ongoing maintenance. Massive pipeline projects such as Mountain Valley Pipeline are vital to the Appalachian Basin’s economy, supporting numerous skilled workers, businesses, and communities. Barring any further setbacks from ill-informed activists, the pipeline will generate $7.4 million in annual tax revenue upon completion.

West Virginia is an energy powerhouse and during the last decade, has increased natural gas production by up to 770 percent. However, with an increase in production, there must be a balance of new infrastructure to transport natural gas. Currently, there isn’t modernization in the pipeline infrastructure, and without that and projects like Mountain Valley Pipeline, there is no way to move energy between midstream and downstream operations.

The facts have always been clear: Pipelines are safe and efficient ways to transport natural gas and are beyond critical to ensure households have the reliable and affordable energy they need. The Mountain Valley Pipeline is no exception to this.