The company’s fourth annual LNG outlook highlights key industry trends from the previous year and lays out LNG expectations spanning the next few decades. Most notably, LNG demand hit record highs in 2019, topping out at 359 million tons, and is expected to double to 700 million tons by 2040. And over the past nine years, the switch to natural gas for power generation has saved the equivalent of over 50 percent of South America’s carbon emissions.

Demand for LNG worldwide grew by 12.5 percent last year to 359 million tons, an industry record of 40 million tons more than 2018.

As EID recently highlighted,  Europe is ideally suited for American LNG exports, and Shell’s findings further emphasize this. Europe absorbed the majority of 2019 global supply growth, increasing its LNG imports by 74 percent. European demand is expected to grow 25 percent by 2040 to 102 million tons per year (MTPA), up from 89 MTPA in 2019, as its domestic production continues to decline. Italy, the Netherlands, Spain, France and the United Kingdom were five of the top six net LNG importers in 2019; China was the only non-European country in the top six net importers.

There was a modest rise in imports to Asia in 2019, slowing compared to the previous two years, partly due to two successive mild winters. In Japan and South Korea, mild weather and higher nuclear availability relaxed demand. In China, demand increased by 14 percent in 2019 and is expected to double by 2040. In South and South East Asia, growing demand for industrial natural gas and declining domestic production is spurring an appetite for imports, to the tune of 21 percent more in 2019 compared to 2018, but more investment in infrastructure is needed to ensure delivery to the areas with rising demand.

Looking ahead, Asia will remain a key growth region, seen in the figure below, as it is home to the top LNG and natural gas importers in the world – Japan, China and South Korea. 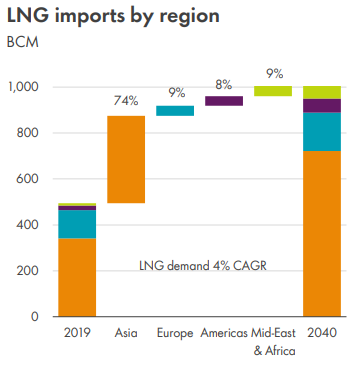 2019 was a record year for final investment decisions (FIDs), with projects around the world sanctioning a total of 71 million tons of new capacity. The record FIDs will delay a supply-demand gap that the industry feared would emerge in the mid-2020s.

LNG supply grew to record numbers in 2019 on the wave of new liquefaction projects. In the short-term, supply growth is expected to slow down as the last of the new LNG projects under construction will be completed by 2021, restoring equilibrium. But this doesn’t mean that the industry will plateau; to the contrary,  supply and demand growth will converge and match, Shell’s report found.

This growing U.S. supply is adding volume and flexibility to the global LNG market, with the market becoming more liquid as spot trading rises as a mechanism for trading and indexing contracts. And as natural gas prices become softer, more liquid, and transparent, the fuel becomes even more attractive to buyers, who reap the benefits of a wider range of purchasing options.

Eighty percent of energy demand growth will be met by renewables and natural gas combined, Shell’s outlook found. Natural gas produces 45-55 percent fewer greenhouse gas emissions and less than  one-tenth of the air pollutants of coal in electricity generation. “Gas continues to provide more and cleaner energy solutions,” the outlook explains, noting that natural gas will work in tandem with renewables to power a growing share of the energy mix.

These developments will help to level global CO2 emissions. Over the past nine years, coal-to-gas switching has already saved the equivalent to 57 percent of South America’s total annual CO2 emissions, or 600 MT of emissions.

The outlook points to growing global population, increased urbanization, rising energy demand and unsafe air quality as key drivers as countries around the world look to natural gas for more power. The historically low price of natural gas – thanks in no small part to the growth of U.S. shale production – positions the resource to best help developing countries fuel economic development in a more environmentally conscious manner. This is especially important in India, China, and South East Asia, which suffer under extreme air pollution, apparent by the map below. 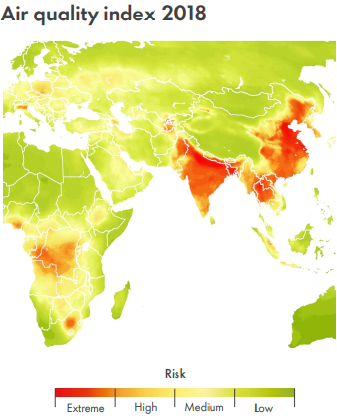 These regions in red are also at the forefront of rising natural gas demand: South Asia is the fastest growing global LNG market, expecting 220 percent growth from 2019 to 2040, and China – the  world’s largest natural gas importer  –  is expected to double in demand to 2040.

Increased supplies and exports of affordable U.S. natural gas are driving further transitions to the fuel for power generation globally, subsequently lowering emissions and improving air quality. New projects in the United States provide the foundation for LNG’s rapid growth, while also driving regional economic growth and enhancing national energy security. LNG is proving itself to be the gift that keeps on giving – and will continue to do so, to 2040 and beyond.